Home Lifestyle SGBV: MINISTRY OF JUSTICE COMMITTED TO THE ESTABLISHMENT OF SPECIAL COURTS –... 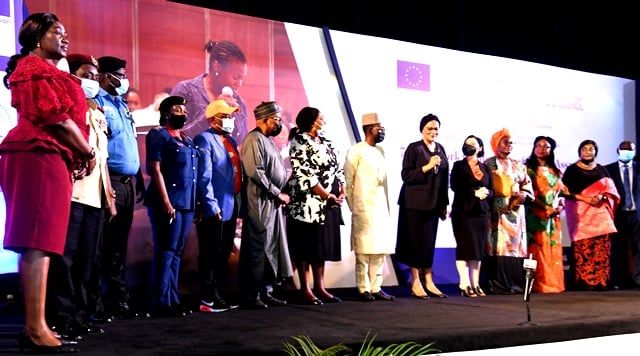 INVESTING IN INCLUSION ACROSS AFRICA: Microsoft Africa Development Center Amplifies Inclusivity with The Announcement of Its Disability Inclusion Event

The Honourable Attorney General of the Federation and Minister of Justice, Abubakar Malami SAN, represented by Ag. Director, Planning, Research and Statistics Barr. (Mrs) Victoria Fila Ojogbane, has categorically affirmed the support of the Ministry toward the establishment of special courts to prosecute Sexual and Gender Based Violence (SGBV) cases in the country.

The HAGF made this affirmation during the 7th Network Conference on Sexual Assault Referral Centres (SARCs) jointly organized by Federal Ministry of Justice, FCT High Court, National Agency for the Prohibition of Trafficking in persons (NAPTIP) and the Rule of Law and Anti-Corruption (ROLAC) Programme. The theme for 2021 is the Imperative for Special Sexual and Gender Based Violence (SGBV) Courts as part of events lined up for the sixteen (16) days of activism against gender based violence in commemoration of International Day for the Elimination of Violence against Women.

‘It is my firm believe that the creation of Special courts to handle cases of sexual and gender based violence will improve the effectiveness of courts services, ensure support for the victims, improve victim participation in the prosecution of their cases and promote efficiency and better information sharing’. The HAGF stated.

‘In the pursuit of this essential need, I approve the constitution of a Federal Special Prosecution Team comprising of investigators and prosecutors from the Ministry, NAPTIP, Nigerian Police Force and other Agencies for training and other incidentals tailored towards achieving the ultimate goal of improving access to justice by survivors of SGBV’. The HAGF further stated.

The HAGF used the opportunity to appreciate and thank development partners particularly the European Union, United Nations Agencies, ROLAC, UNICEF, UNODC as well as Ministry of Women Affairs, Ministry of Humanitarian Affairs, Disaster Management and Social Development among others especially in relation to building capacity of critical justice actors and in supporting the Ministry’s efforts at galvanizing synergy among justice and law enforcement actors.

In her opening remarks, the Honourable Minister of Women Affairs, Dame Pauline Tallen OFR lamented the huge number of pending sexual related cases in courts. She assured that her office was taking all necessary steps in collaboration with the Federal Ministry of Justice, Office of Chief Justice of Nigeria, National Assembly and development partners to expedite action on the pending cases and get justice for the victims.

‘Women and children that are being violated are too huge. The number is too huge to be ignored and these are future mothers. And it is not only the girl-child, even the boys. The number of boys that are violated and being abused is also huge. We can’t sit and do nothing. They are our future mothers and future leaders’. She declared.
While delivering his keynote address, the Chief Justice of Nigeria, Hon. Justice Ibrahim Tanko Muhammad, represented by a Justice of the Supreme Court, Justice Amina Augie, advocated for synergy between security agents, the public and the media in tackling the prevalent problem of gender based violence.

‘Courts do not go looking for cases but courts entertain cases brought to it by the public’. The CJN stated.

The CJN further pledged the commitment of the courts to working with the Federal Ministry of Justice and the Ministry of Women Affairs in speedy prosecution of the offenders.