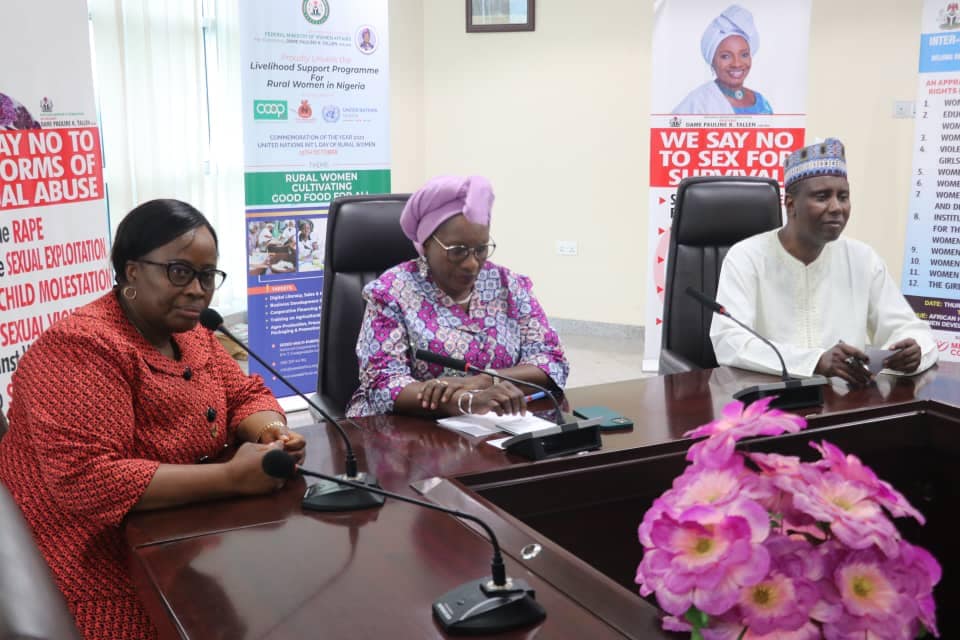 The Honourable Minister of Women Affairs, Dame Pauline Tallen. OFR, KSG has directed the Department of Economic Services of Her Ministry to further explore the newer proposal of the UN-Women’s agricultural empowerment digital platform tagged, “Rural Women Economic Empowerment Through Digitally Assisted Climate Smart Agriculture” so as to harness the benefits for many more Nigerian rural women.

It should be recalled that the Ministry through the same Department has a similar platform which it runs under the World Bank-assisted Nigeria for Women Project (NFWP) which however is not empowering women in Agriculture but for the economic emancipation of women through Cooperative Societies in their trade clusters.

Dame Tallen gave the marching order to the Department of Economic Services when she received in audience, the new UN-Women Country Representative to Nigeria and Ecowas, Ms. Beatrice Eyong who came on her first official visit to the Minister. The new Country Representative came hitting the grounds running, with her proposal on Rural Women Economic Empowerment Through Digitally Assisted Climate Smart Agriculture.

The Women Affairs Minister, Dame Tallen stated that the digital platform of the UN-Women aligns with the Ministry’s World Bank assisted project on women economic empowerment which she revealed is very dear to her while observing further that the main problem of women is poverty. The Minister’s recommendation is that “If government could focus more on empowering women, it will not only change the lives of women alone, but jump-start the economy.” She therefore called for more Government’s resources to be devoted to women empowerment projects.

Ms. Beatrice Eyong, the newly deployed UN-Country Rep to Nigeria and ECOWAS who is a Cameroonian succeeds Ms Comfort Lamptey in that Office. She has over 35 years professional working experience in promoting gender equality and Women’s Empowerment.

The UN-Women Country rep who came in company of her Deputy, Mr. Jansana Wonneh and UN Consultant, Christine Uwamahoro; said UN-Women in Nigeria is developing a “new strategy note” which is the organization’s plan for the next 5years. According to her, the Ministry’s team needs to put “words” into the draft strategic document on what UN-Women programme should be for the country in the next 5years. She submits that the organization doesn’t want to sit in the office and come up with information on what they think the needs of Nigerian Women, girls and vulnerable should be. This, she said made them to incorporate field-data gotten from 6 Geo-political zones covering 36 States of Nigeria into the document.

Beatric Eyong further stated that the UN-Women’s coming to the Ministry is also, to tell the Minister that they are at the point of developing this document saying that whatever programme UN-Women will carry out in Nigeria must align with what the Ministry stand for and must tally with national priorities.

Commenting on “Rural Women Economic Empowerment Through Digitally Assisted Climate Smart Agriculture”, Beatrice disclosed that the digital platform to drive Assisted Climate Smart Agriculture for rural women has been applied in Mali, Senegal and other parts of Africa and has been embraced and met with many successes to the benefit of rural women farmers and even men.
She pointed out that a lot of leadership work have been done at the National and States levels on the digital platform. She said the aim of the digital platform is to use it to enhance both economic and financial capacities of rural communities; as it introduced them to digital economy and better prepare them for climate change. It is also to see what opinions, inputs and criticisms the Ministry may have on the digital agricultural platform to make it better.

As the Women affairs minister at the courtesy call event formally welcomed the newly deployed Permanent Secretary, Mr. Aliyu Shehu Shinkafi to the Ministry, she seized the moment to congratulate the newly promoted Directors, Andrew Ali Madugu of the Child Development Department and Funke Oladipupo of Women’s Development Department.

Dame Tallen stressed the need for everyone in the Ministry to keep drumming support for and advocating for the empowerment of many more Nigerian women, especially those in the rural areas. According to her, once a woman is empowered, the home and lifestyle of her family will change and the nation will be healthier and better-off.

In his short speech to welcome the new UN-Women’s Country Rep and her Team, the Permanent Secretary, Mr. Shehu Aliyu Shinkafi, while welcoming the new UNWomen Country reps, said he fully appreciates the UN and other development partners in their collaboration with the Ministry; particularly, in the roles they are playing in the lives of women and children. Shinkafi prayed that the synergy of the UN Agencies with the Women Affairs Ministry will grow from strength to strength.

The courtesy call event had in attendance other Directors of the Ministry, including Director of Economic Services, Mr. Idris Mohammed who while giving a vote of thanks to close the event remarked that the directive of the Honourable will not only be expedited, but deeper research to enable a successful outcome for the Un-Women’s Rural Women Economic Empowerment Through Digitally Assisted Climate Smart Agriculture.

NATIONAL PRAYER CONFERENCE: NIGERIANS ENCOURAGE TO LOOK UP TO GOD FOR PEACEFUL ELECTIONS BY FULL PARTICIPATION

WHY OUR FEAR OF AFTERLIFE IS UNFOUNDED!

Update: My Dad Swore That I’ll Never Become Useful In Life; And He Chased Me Out Of The House – Chiamaka Nnadozie