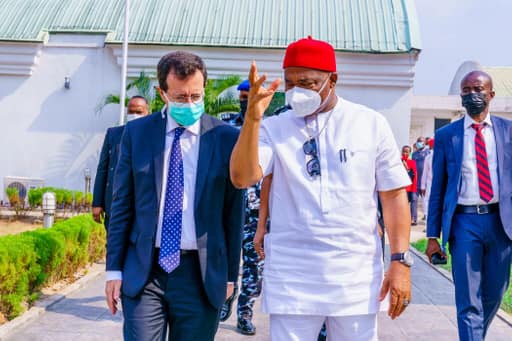 For over 20years, the French Government had tried at various points to synergize with the people of South East for a harness of the industrious culture of Igbo race. However, unfavourable government, policies and non conducive atmosphere has characterized the challenges and obstacles faced, which had hitherto hindered the world giant from establishing presence.

However, attracted by the visible landmark and unprecedented reforms and policies of the Shared Prosperity administration of His Excellency the Distinguished Senator Hope Uzodimma, the French Government led by His Excellency Mr Jérôme Pasquier, the French Ambassador to Nigeria, have decided to partner with the Imo State Government for business and industrialization.

His Excellency, Mr. Jérôme Pasquier, made this known at the Imo State Government Executive Council Chambers, Owerri, Imo State during his working visit with his team. The French Ambassador to Nigeria, disclosed that knowing the reputation of Igbo people in business, he foresee the visibility and viability of doing business in Nigeria especially in Imo State amongst other opportunities.

The Imo State Governor, His Excellency the Distinguished Senator Hope Uzodimma commended their move to invest and partner with Imo State Government for a bilateral beneficial venture.

Governor Uzodimma highlighted many opportunities In Imo State to invest in which includes the Gas deposits as he disclosed that Imo State has the highest Gas Deposits in the entire country and the State Government is willing to do credible business for the benefit of Imo people, the country Nigeria and the French Government

The Imo State Governor also called for technical support on the area of mechanized farming as the University of Agriculture is established and ready to inculcate digitalized agricultural education to Imo young men and women.

Kebbi flaggs off training of Health workers for Covid -19 Vaccination