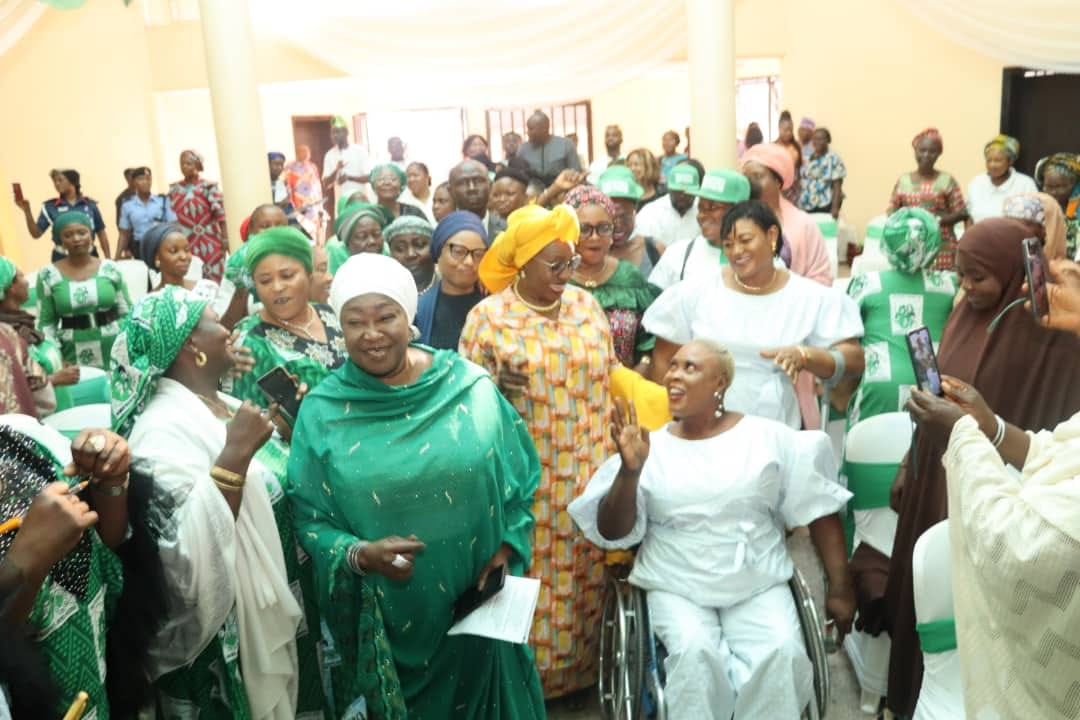 The Honourable Minister of Women Affairs (HMWA), Dame Pauline Tallen, OFR, KSG has stated that the dominance of Nigeria’s Female Athletes in global arena was a feat that worth commending and celebrating as it has raised the bar in sporting community. She added that this shows that women hold the ace in the future of Nigeria.

Tallen showers these encomiums on the female athletes who brought more laurels home than their male counterparts in Team Nigeria to 2022 Commonwealth Games on the 15th of September, 2022 at National Centre For Women Development, Abuja where reception in honour of Nigerian Female Athletes who made the country proud at the just concluded World Athletics Championships in Oregon, United States from July 15–24, 2022 and at Birmingham 2022 Commonwealth Games, United Kingdom from July 28 to August 8, 2022 was held.

The Minister, who graced the occasion in company of the Minister of Humanitarian Affairs, Disaster Management and Social Development, Hajia Sadiya Umar Farouq and Minister of Youth and Sports, Mr. Sunday Dare, commended both Ministers for their believe in collaborations with her Ministry to improve the lots of Nigeria women.

While she specifically called the Honourable Minister of Youth and Sports as the most outstanding Minister of Sports, Tallen said the celebration of the great “Heroines” and “Amazons” have re-written the history of Nigeria in the world of Athletics; saying that the hosting of Team Nigeria with the Female Athletes by President Muhammadu Buhari at Presidential Villa, earlier in the morning, was a demonstration of the importance which Mr. President attached to the accomplishments of the female athletes and the team in general.

She disclosed that this year’s Commonwealth Games was the best ever since 1955 when the country have been participating in the tournament. She emphasized that out of the total 35 medals won in the 2022 Commonwealth Games, all the 12 Gold medals were won by female athletes.

The Minister stated that projecting the contributions of women in national development is what the event is out to promote and also, as exemplified in the vision of the founder of “Better Life for Rural Women”, the Late Dr. Maryam Babangida; the event was convened at the venue to enunciate her ideals which is to appreciate and do honours to iconic female athletes.

“When you believe in yourself, you can achieve greatness. This was demonstrated by our dear Tobi Amusan who stunned the world when she shattered the women’s 100 meters hurdles world records in 12.20seconds at the World Championship in Oregon, USA. Not forgetting the ever-consistent long jumper, Ese Brume who clinched silver medal in her game.”

The Minister described Ese’s performance like the other women athletes as the best ever where she rose to the challenge by lifting the Country high by sustaining clean records to bring home a number of outstanding medals. She pointed out that this set us apart from the last game where Nigeria brought home 11 Gold, 13 Silver and 13 Bronze medals.

As she stressed that the honours event is all about women achievements, she further stated that despite the fact that the Super Falcons did not do well in Morocco competition, the squad still qualified for Women World Cup, unlike the Super Eagles that did not, instead, they lost to Ghana.

Super Falcons, according to her, is the most decorated African Team on African continent, wining African Women Nation’s Cup, nine consecutive times.
While recognizing other past athletes’ contributions for blazing the trail in sports, the Minster, singled out Mary Onyali who is presently the Special Adviser for Sports to the Honourable Minister of Sports, Mr. Sunday Dare, for being the first female to captain “Team Nigeria” at the international competition. The Minister said that as we celebrate those athletes of the past, it is much better to celebrate them when they are still alive.

Earlier in his welcome address, the Permanent Secretary, Federal Ministry of Women Affairs, Shehu Aliyu Shinkafi represented by Director, Economic Services Mr. Idris Muhammed, said women participation in sports has broken stereotypes as evidenced in the achievements of women athletes. He equally disclosed that women participation in sporting activities improves their self-esteem and contributes to women leadership skills. He revealed that women suffer discriminations at both amateur and professional sports saying that they face many challenges such as safety, social stigma, decrease quality of experience, cost and lack of positive role models.

Apart from goodwill messages from the Minister of Humanitarian Affairs, Social Development and Disaster Management, Hajia Sadiya Umar Farouq and Minister of Youth and Sports, Mr. Sunday Dare; other dignitaries such as Hajiya Lami Adamu Lau, the National President of the National Council for Women Societies, (NCWS); Stella Erhuvwuoghene Okotete, the Executive Director, Business Development NEXIM Bank and Dr. Asabe Vilita Bashir, the DG of National Centre for Women Development (NCWD) as well as women leaders and CSOs and NGOs made remarks at the occasion.

The high point of the event was the presentation of plaques and gifts to the athletes in turn by the Honourable Minister of Women Affairs; Minister of Humanitarian Affairs, Social Development and Disaster Management and Minister of Youth and Sports.