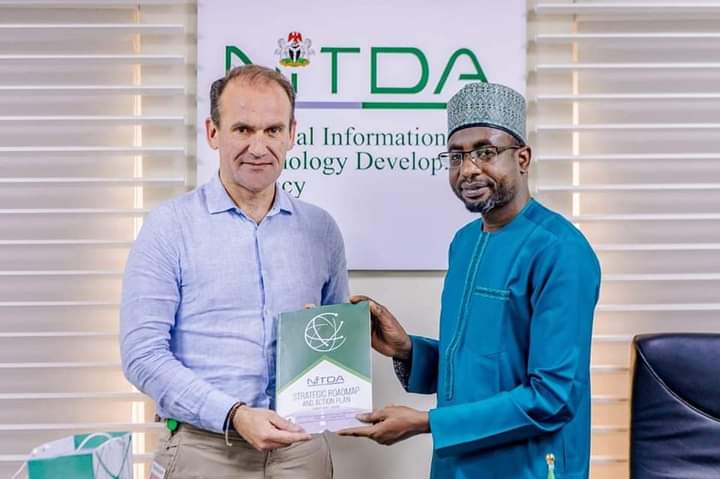 The Director General, National Information Technology Development Agency, (NITDA) Kashifu Inuwa, CCIE, has said Nigeria has a competitive advantage to continue positioning itself as the global talent factory in the areas of technology, sports, music, and movie industries.

Inuwa made this known when he received the Chief Executive Officer, (CEO) of Outsource Global, Ms. Amal Hassan on a courtesy visit to the Agency’s Corporate Headquarters, in Abuja.
The visit was aimed at partnering with NITDA in the area of digital economy policies and initiatives, and to work with NITDA to actualise the rebranding of the country.

While assuring the team of the Agency’s maximum cooperation, Inuwa noted that NITDA is one of the Federal Government’s Agencies in charge of implementing National Digital Economy Policy and Strategy (NDEPS). According to him, the Agency wishes to partner with Outsource Global in achieving the needed result in Nigeria’s digital space.

He reminded the visitors that NITDA was established in 2001 to help with the integration of IT into Nigeria’s system noting that at that time, less than 500,000 Nigerians have access to computers with ICT’s contribution to the nation’s Gross Domestic Product, (GDP) less than 0.5 percent.

However, today, according to Inuwa, more than 100 million Nigerians have access to internet and computers because “our mobile phones are computers and with improved contribution of ICT to the tunes of 18.44 percent to the GDP; almost twice than what oil and gas were contributing to Nigerian GDP, because the latter contributed about 8 percent.”

He added that NITDA was calibrating to transform the Agency and the sector to position Nigeria in the global digital economy map, create and capture value, and become the superpower in Digital Economy.

He said “Outsourcing is the greatest idea in which critical stakeholders, and influential mindsets people have to listen and look into collectively for making Nigeria a strong Digital Economy nation, and working with the tech ecosystem, and listening to them would help stimulate the growth of the tech ecosystem.”

“To believe in the eecosystem, everyone has his own role and responsibilities, and the government’s responsibility is to intervene in terms of infrastructure, policies, and regulations,” he added.

Inuwa reiterated that Nigeria has a brighter future when it comes to Business Process Outsourcing.

In her remarks, the CEO of Outsource Global, Amal Hassan and her counterpart, Ben Faes described the visit as timely considering the warm reception and sharing of ideas on the partnership with NITDA.

She underscored the importance of Outsourcing as a subsector that offers employment opportunities to thousands of people globally.

She concluded that Outsourcing Global would tap from NITDA’s wealth of experience to rebrand Nigeria as a world-class ICT destination.

KORRA OBIDI: IS SHE THE RIGHT PERSON TO INFLUENCE OUR GIRLS RIGHT NOW ?