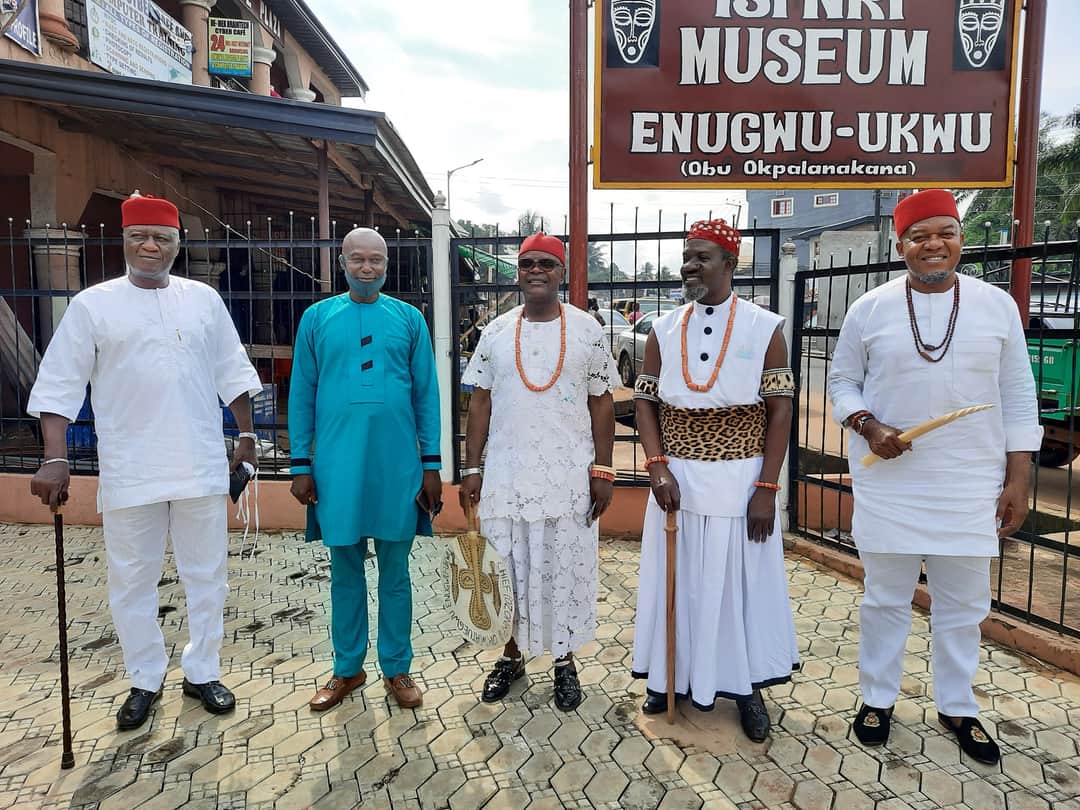 Inaugurating the 22-man Board of Management, Igwe Ekpeh charged them amongst other things to source more artifacts and collections on Nri and Igbo literature, label and trace the origins of artifacts already in the museum, attract local and foreign visitors, establish linkages with international agencies for grants and support, and position Isi-Nri museum as an international cultural and academic centre.

Chief Ramas Asuzu Okoye (Akajiofor), patron and consultant to the museum pledged his continued support to the museum. He said that he is pleased with the progress and development which Enugwu-Ukwu has experienced under the leadership of Eze Enugwu-Ukwu, Igwe Ekpeh.

Ozonkpu Chief Jude Ekwunife (Okwuatuegwu), Culture Minister of Enugwu-Ukwu and Chairman of Isi-Nri Museum Board of Management spoke on behalf of the members and assured that the Board will work very hard to achieve their mandate. He said that Isi-Nri museum remains one of the most critical projects that Ndi Enugwu-Ukwu have embarked on as it is a center for the preservation and showcasing of not only Enugwu-Culture, but also Nri and Igbo culture.

Ozonkpu Ekwunife said that the museum has potentials to attract revenue that will also be used for other projects in Enugwu-Ukwu.

Professor Ifeoma Dunu of Mass Communication department, Nnamdi Azikiwe University, Awka and a member of the management board praised ndi Enugwu-Ukwu for the dynamism and spirit they show which led to the setting up of the museum. She suggested that the museum should create programmes that will attract visitors and revenue to the museum. She said that Nollywood practitioners would find the museum useful in their film productions.

Bonny Ozo Nkwuaku, President General of Enugwu-Ukwu Community Development Union (ECDU) pledged that ECDU will support and work with the Board of Management to achieve their mandate.

Mr Tagbo Oguejiofor, a writer who has written so much on Enugwu-Ukwu history and a member of the Board of Management expressed joy over the museum project. He said it would contribute to ongoing efforts to document the history and culture of Ndi Enugwu-Ukwu, Ndi Nri and Ndigbo.

Ambassador -designate of the Federal Republic of Nigeria, Elijah Onyeagba in his first public outing in Enugwu-Ukwu since his confirmation as Ambassador of the Federal Republic of Nigeria by the National Assembly officially informed Eze Enugwu-Ukwu, Igwe Ralph Ekpeh of his ambassadorial appointment. He preached co-existence in Nigeria and informed the audience that he owes his appointment to Boss Mustapha, the Secretary to the Government of the Federation (SGF). He charged Anambra youths to always invest in skills and capacity building programmes so as to take advantage of any emerging opportunity. Ambassador Onyeagba also promised his support for the museum.

Chief Nduka Anyanwu, Chairman of the Board, Administrative Staff College of Nigeria (ASCON), a native of Abia state who accompanied Ambassador Onyeagba to the inauguration expressed delight at the spirit shown by Ndi-Enugwu-ukwu and said that he is now an adopted son of Enugwu-Ukwu. He promised his support to the Isi-Nri museum project.

Chief Uche Nworah (Ezeudo), Secretary of the Board of Management, Isi-Nri museum thanked Igwe Ekpeh for considering the members worthy to serve. He assured that they will work together to achieve their mandate.

The members of the Board and other guests took a tour of the museum to appreciate the cultural pieces on display. Igwe Ekpeh later entertained all at his palace.

CREATE 2.1: BRINGING WOMEN IN TUNE WITH THE TECHNOLOGICAL TRENDS AND CAPACITY BUILDING