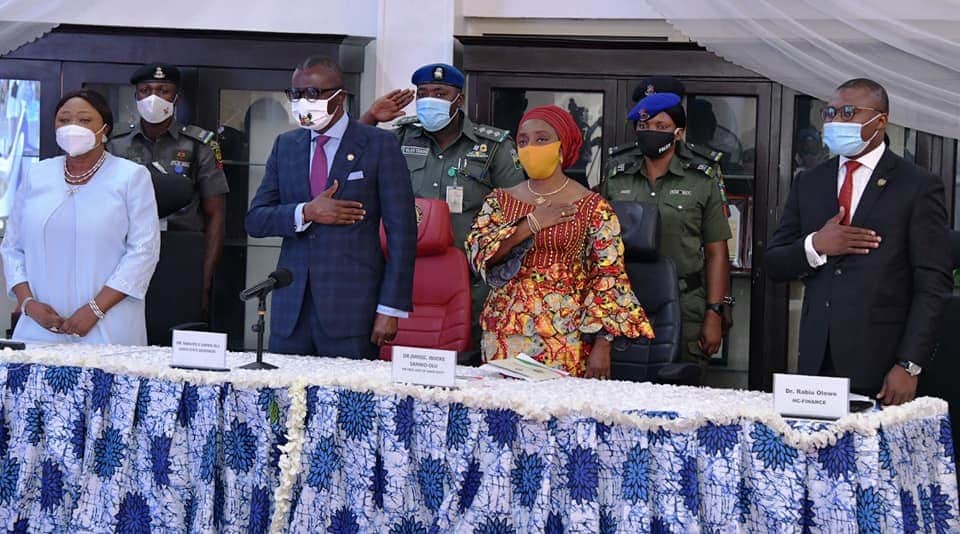 •Grants Three-Year Waiver On Penalty For Land Use Charge Defaulters

With the approval of N1 billion seed capital for investment in tourism, Lagos State is set to drive a new growth in hospitality business. Governor Babajide Sanwo-Olu announced the approval of the loan on Wednesday at the 6th Lagos Corporate Assembly held at the Banquet Hall in the State House, Alausa.

The Governor said the investment was required to bolster the hospitality sector by providing key operators in tourism business with soft loans to boost their capacity in driving growth. The initiative, Sanwo-Olu observed, is necessary to position tourism business as a new frontier for job creation and economic prosperity in the post-Coronavirus era.

The seed capital will be domiciled in the Lagos State Employment Trust Fund (LSETF), the Governor said, adding that the funds will be made available specifically to Micro, Small and Medium Enterprises (MSMEs) operators in the sector.

The Governor said the State would also be collaborating with the Central Bank of Nigeria (CBN) to further create access for fund to support the hospitality business.

The event with the theme: “BOS Meets Business, was attended by the captains of industry, manufacturers, and members of Small and Medium Enterprises Development Agency of Nigeria (SMEDAN).

Besides, Sanwo-Olu disclosed that the State had started the first phase of the 6,000km optical fibre being laid across Lagos, with the aim of providing technological infrastructure to support MSMEs.

He said the State had continued to strengthen its Ease of Doing Business policies to drive private investment and economic growth. This, he said, is being made possible by the digitisation of business registration and asset acquisition processes, which, he said, removed administrative bottlenecks.

He said: “We have just given approval for N1 billion support that will be given out through the Lagos State Employment Trust Fund to support hospitality business in the State. The beneficiaries of this fund will go through screening in line with the requirement of the agency. We are making this investment because of the huge potential for job creation and inclusive growth this sector can bring about.

“We will be working with the CBN for more funding to fully develop the potential of our tourism sector. This effort is being completed with the rolling out of 3,000 km optical fibre across the State to provide technological infrastructure for the MSMEs whose operations would depend on fast Internet networks to drive their businesses.”

With Lagos’ Gross Domestic Product (GDP) valued at $130 billion and over three million Micro, Small and Medium Enterprises (MSMEs), which make the State the fourth wealthiest city in Africa, Sanwo-Olu said it was time for the State to strengthen its economy with right policies for accelerated growth and prosperity.

The Governor said there will be a review of the dusk-to-dawn curfew imposed in the State by the Federal Government in response to requests by businesses across the State, noting that the ongoing rehabilitation of major bridges and roads had impacted business activities in the State.

Sanwo-Olu said the repeal of 2018 Laws on Land Use Charge was to further create incentives for more growth in the corporate sector, stressing that the new Land Use laws had addressed controversial provisions and remove ambiguity in the levies paid by companies in Lagos.

The Governor granted a three-year waiver on penalty for those that defaulted the payment of land use charge from 2017. He also offered a 25 per cent discount for those who make early payment of the Land Use.

He said: “We are granting a waiver of three years in late payment, which covers 2017, 2018 and 2019. We are also giving 25 per cent special discount on early payment. By this, we have achieved a 48 per cent reduction for businesses in chargeable rates by repealing the 2018 Land Use Laws.

“We are taking these steps to show that we are not being insensitive to the plight of businesses and residents, especially in this period of pandemic that have slowed down activities. We have been doing everything possible to make sure businesses are not choked by taxes.”

Sanwo-Olu told the business leaders and MSMEs operators to see his administration as a “real partner” in driving growth. He said the Government would continue to introduce more incentives to strengthen its partnership with the private sector to keep Lagos economy on the path of growth.

Representatives of corporate organisations praised the Governor for the reviews of the Land Use Laws. They, however, called for harmonisation of taxes and levies payable to the Government.

Deputy President of Lagos Chamber of Commerce and Industry (LCCI), Chief Olawale Cole, hailed the State Government for the three-month moratorium given to MSMEs, noting that the incentive would stimulate more commitment in the sector.

Commissioner for Commerce, Industry and Corporative, Dr. Lola Akande, noted that Lagos Government had taken steps since the last meeting with the Organised Private Sector to sustain the momentum of growth.

She said: “We recognise that creating an enabling business environment is the key to job creation, poverty eradication and growth of the State economy. Lagos State is positioned to support businesses and industrial sector to maximise their potential for greater contribution to the State’s GDP.”

A day trip to San Francisco.

Errand360HQ:Meet Abanofor Chibuzor Gideon, one of our riders operating from The Victoria Island Hub