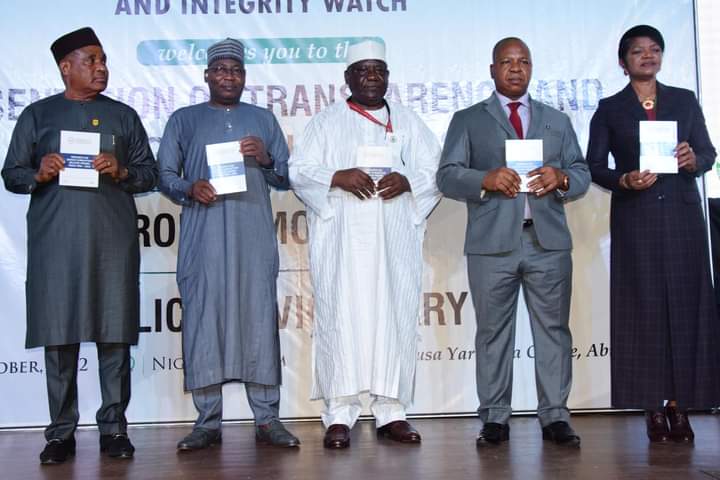 The Center for Fiscal Transparency and Integrity Watch (CeFTIW) has said that its study has shown remarkable improvement in the performance of Ministries, Departments and Agencies (MDAs) in the core areas of open governance and transparency in Nigeria.

The Chairman, CeFTIW Board of Trustees, Amb. Angela Nworgu, confirmed this in Abuja, while presenting Transparency and Integrity Index, Public Service Diaries and Probes Monitor Portals, jointly conducted with the Bureau of Public Service Reforms (BPSR).

She said the ultimate goal of the event was in furtherance of the commitment of the Federal Government and the center’s efforts at promoting transparency and accountability in the nation’s public service, and good governance in general.

The BoT Chairman explained that the initiative was developed to monitor public sector expenditure and provide same to the public. It also monitors issues relating to the integrity of public officers as well as public institutions’ responsiveness to public scrutiny.

Amb. Nworgu said, “Today, we are gathered to present three of our other interventions aimed at promoting transparency in the public sector.

“Firstly, the Transparency and Integrity Index (TII) is one of the Center’s flagship projects supported by the MacArthur Foundation. It was borne out of the need to strengthen existing preventive mechanisms in combating corruption; especially given the concern that huge resources are deployed every year to prosecute corruption without corresponding decrease in incidents.

“Secondly, today’s program will see the presentation of the Public Service Diaries platform developed in partnership with the BPSR. The PSD project leverages technology to create a platform for knowledge sharing between retired public servants and existing public officers.

“Also today, we are physically presenting our Probes Monitor Portal. The PMP was developed in view of the Center’s concerns, first and foremost, about the abuse of constitutional processes in which probe panels are constituted and either abandoned halfway or their recommendations are not implemented, a situation which continuously weakens our democratic processes. The portal hosts information on grand corruption-related probes that were made public between 1999 and 2022; to draw attention of all concerned stakeholders to the litany of abandoned probes,” she added.

She then urged citizens to take advantage of the portal and data provided thereon to demand for transparency and accountability from their elected leaders and the public sector in general.

Earlier speaking, the Secretary to the Government of the Federation (SGF), Boss Mustapha, said the CFTiw initiative by to conduct a Transparency and Integrity Index Assessment for MDAs and other relevant government agencies, is commendable and a welcomed development towards entrenching accountability and good governance.

He said the NGO deployed the use of some parameters to ensure that the set objectives of the project are achievable.

Mustapha said, “Particularly, the six parameters employed by CFTiw namely Website Integrity, Fiscal Transparency, Open Procurement, Anti- Corruption, Citizens Engagement and Human Resources, to benchmark the 2022 assessment of MDAs are remarkable as they are critical indices to determining good governance in the society.

“It is also envisaged that the development of the Probe Monitor Portal and the Public Service diary would become a repository knowledge that would facilitate referrals for judicial prosecution, as well as provide institutional memory within Public Institutions that could deepen principles of integrity.

“Undoubtedly, the quest for Citizens’ greater responsiveness, better use of public resources and development has heightened the need for transparency of public revenues.

“The thrust of government is to ensure that through its fiscal instruments and policies, a verile and sustainable economy is attained. Government alone cannot achieve this feat, this why initiatives and support from non- State actors as exemplified by the Centre for Fiscal Transparency and Integrity Watch(CFTiW) is most welcomed,” the SGF added.

Similarly, the BPSR DG, Dasuki I. Arabi, described the assessment as another milestone that encourages peer review mechanism aimed at stimulating competitiveness for better performances and as well, ensure the compliance to critical indices required for national development by MDAs.

“Accordingly, the unveiling of the Probe Monitor Portal and the Public Service Diary Application is a laudable step towards creating reservoir of knowledge for judicial processes, as well as strengthening track records of Public Servants towards mentorship and promoting core ethical values within Public Institutions.

“The clamour for a transparent and accountable government ever than before became a burning issue to the people, leading to the emergence of the wave of activism into public funds and accountability. Transparency and accountability are critical for ensuring that resource is well managed for the benefit of all.

The DG highlighted some of the credible gains made by his bureau in initiating reforms, with the introduction of the reforms in Public Financial Management, where fiscal instruments have successfully blocked leakages and brought about probity in the Public Financial System in Nigeria.

THE NIGERIAN START-UP, THE BUSINESS THE INVESTOR, PATIENCE AND THE ISSUE OF ROI