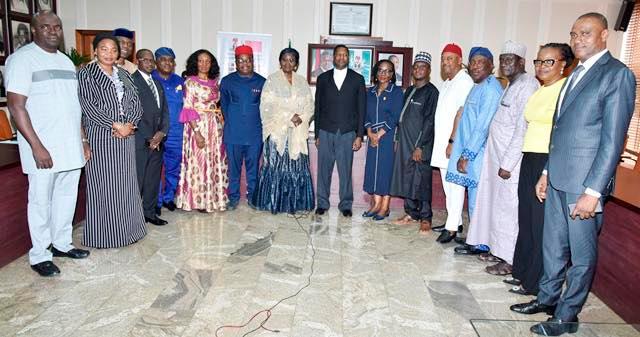 The Governing Council of National Human Rights Commission (NHRC) has sought support from the Federal Ministry of Justice (FMOJ) to strengthen the partnership between them.
This was made known during the courtesy visit of the council to the Honourable Attorney General of the Federation and Minister of Justice, (HAGF) Abubakar Malami, SAN on Monday, 12th September, 2022 in Abuja.
In his response, HAGF said that the leadership of President Muhammadu Buhari has recorded tremendous success associated with the human rights in Nigeria and abroad.
Malami stated, “looking at it from the legislative perspective, a piece of legislation that give birth to NHRC indeed a legislative approach by the government, but having a place not only a legislative but institutional framework”.
“If you are equally looking at it from the perspectives of the enactment that already targeted at supporting the human right posture of the government, i think we have done wonderfully well among the antecedent establishing a commitment to human right ” he informed.
He explained that the importation by way of law and legislation of the protocol to the African Charter on Human and Peoples’ Rights has further consolidated by way of establishing deliberate legislature.
“On this note, let’s restrict our commitment to support having a place of FEC memo as it is relates to national action plan, a memo that relates to national policy for the protection of civilian from harm during conflict and indeed look into a possibility of arising there from prerequisite declaration pursuant of article 34 (6)” he advised.
“I request that you package necessary process working with the office of HAGF and other agencies and perhaps ministry of humanitarian affairs and disaster management to see what action plan you can put across. This is because of their recent presentation associated with the human rights as it relates to national action plan “he further advised
He implored the commission to cover the field by way of doing the needful locally before perhaps migrating to international commitment with particular regards to adoption of certain protocols and conventions.
The solicitor general of the federation and permanent secretary, Beatrice Jedy-Agba in her welcome address, appreciated the NHRC on its effort towards protection and promotion of human right in the nation. She urged them not to relent in making the masses feel its impact.
Earlier, the chairperson, Governing Council of National Human Rights Commission, Dr. Salamatu Sulaiman, in her remarks said, the cordial relationship between the ministry and NHRC propelled them to seek for strengthened partnership so as to ensure sustenance of the fruitful partnership.
Dr. Salamatu Sulaiman, disclosing the objectives of the visit said the commission sought the collaboration for the presentation for Federal Executive Commission (FEC) approval of the National Action Plan (NAP) for promotion and protection of human rights, also the support for the presentation and FEC approval of national policy for the protection of civilians from harm during conflict.
She further revealed that, “the federal government is taking the following steps; making the requisite declaration pursuant to article 34 (6) of the protocol to the African Charter on Human and Peoples’ Rights. She explained that this will create direct access to the African Court on Human and Peoples’ Rights by individuals and non-governmental organisations (NGOS).
“This singular move will widen the scope of access to protection of human rights in the continent and Nigeria inclusive, ratifying the protocol to the African Court on Human and Peoples’ Rights on the rights of older persons in Africa and signing ratifying the protocol to African Court on Human and Peoples’ Rights on the right of persons with disabilities in Africa”.
She stated that the collaboration and support for signing in to law of the amendment of the NHRC act when presented to the president for assent. The amendment act seeks to provide for resourcing the human rights funds under the act through minimal contribution from stakeholders and companies, to ease the government of the burden of solely funding human rights promotion and protection in the country.
The commission appreciated the HAGF for the use his good office to facilitate issues concerning the commission.
Preview post

A fast and accurate way of overcoming estate planning challenges