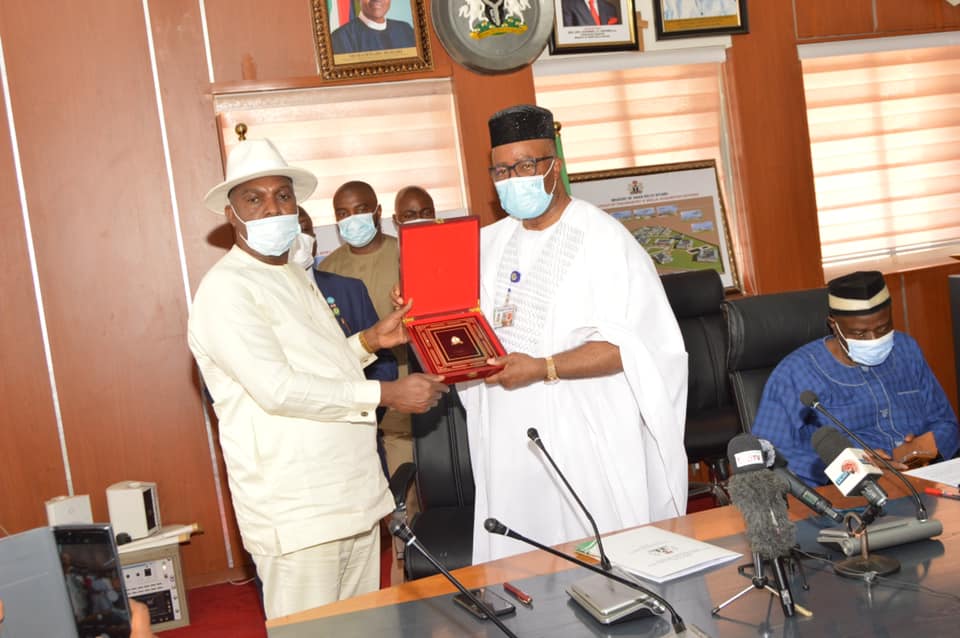 The Honourable Minister, Ministry of Niger Delta Affairs, Sen. Godswill Akpabio has hinted moves by the Federal Government to give legal teeth to deal with any of the International Oil Companies (IOC’s) that fail in its statutory obligation to oil producing communities.

The Minister made this observation during an interactive session with members of “Course 15 Executive Intelligence Participants of the National Institute for Security Studies” (NISS), at the Minister’s office recently in Abuja.

“A law that will compel IOC’s engaged in oil exploration and exploitation in the Niger Delta region has already passed Second Reading in the House of Representatives. It is expected that when the bill is passed into law, there would be sanctions and punishment for any defaulter”, he said.

Sen. Akpabio who noted that environmental pollution resulting from the activities of oil and gas exploration in the region is real, commended the institute and participants for opting for this year’s theme, “Global Climate Challenge Practice & Prospects for Economic Development and Conflict Resolution in Africa”. He explained that such study would help participants to identify practices responsible for the situations and proffer solutions that would promote peaceful co-existence.
According to the former Governor, the theme is a clear example of the emerging situations not just in the Niger Delta area but also in the Lake Chad region bordering Nigeria, Cameroun and Niger Republic that has been experiencing serious climate change recently.

Speaking further, the Minister said that the drying up of Lake Chad from its initial 25,000-sqkm water logged area to just 6,000-sqkm has lead to the disruption of the economy and social life of the people around the area, therefore encouraging Migration of farmers and herders across the length and breath of Africa and giving rise to conflicts among different groups.

The former Senate Minority Leader explained that the Ministry, which was established in 2009, has the mandate of coordinating the activities of interventionist agencies in the aspect of development and also ensure that total peace is achieved in the region. The Ministry does this by organizing workshops, seminars, engaging different stakeholders to douse envisaged tension in troubled areas, it also encourages International Oils Companies (IOC’s) to adopt international best practices in their exploration activities.

Earlier, Deputy Commandant and Director Studies, National Institute for Security Studies, Mr. Didacus Egor Egbeji, commended the Minister for sustaining peace and stability in the versatile region with infrastructural development cutting across the nine States of the Niger Delta region.

The Deputy Commandant, states that this year’s course in the institute with the theme “Global Climate Challenge Practice & Prospects for Economic Development and Conflict Resolution in Africa” tallies with the Ministry’s mandate and is paramount to the Niger Delta region.

Egbeji, further maintained, that the visit among other reasons was to hear from the Minister, what the Government and Ministry are doing to curb issues emanating from oil pollution in the region. According to him, “when we talk of Global Climate Change, we mean what affects the ozone layer, concerning oil exploration and the degradation of the environment by the activities of multinational companies operating in the region”.

Danbatta Condoles with Emirs of Kano, Bichi over Mother’s Demise

A Better Urban Future Is Within Our Reach – Fashola