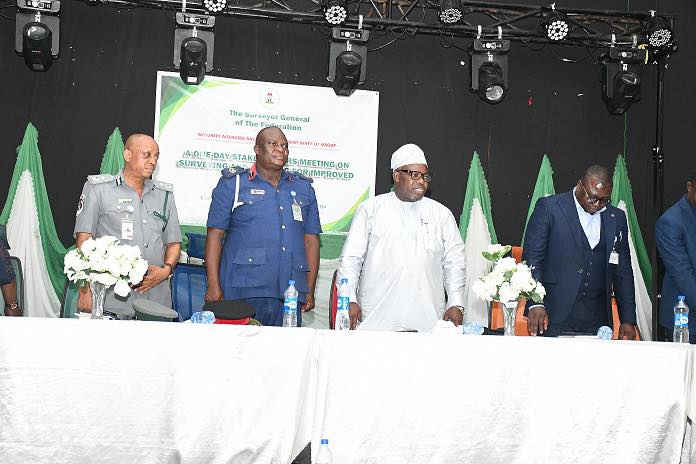 Defence and security operations can hardly be achieved without undertaking critical surveying and mapping that can help in defining locations or areas of incidents covering all manners of unjustified actions against government and the state. Such actions may include armed banditry and robbery, insurgency and other act of terrorism, kidnapping and abduction, invasions and smuggling.

The activities of the various groups of armed criminals culminating into the insecurity facing the country today formed the contention and confrontation of our gallant military and other security agencies to restore a sense of security countrywide.

In an effort to actualize part of its mandates and achieve the strategic interagency synergy strongly encouraged and honed by the Federal Government in order to attain our common national interest, the Office of the Surveyor General of the Federation (OSGoF) recently organized a one-day meeting with the representatives of the Office of the National Security Adviser (ONSA), the military and other security agencies.

The essence of the meeting according to the Surveyor General of the Federation (SGoF), Surv. Abudulganiyu Adeyemi Adebomehin was to have sessions of deliberation with our defence and security stakeholders for the purpose of identifying their geospatial needs, suitable surveying and the mapping required for effective operations.

Surv. Adebomehin explained that current purpose maps of the country would be converted to 3-Dimensional (D) Maps that would be highly interactive for a well-coordinated air and ground operations for the military and other security agencies. He said the bio-data and National Identification Numbers (NINs) of people could also be integrated into the maps to track or trace criminals.

He maintained that issues of security remained the business of various government authorities as well as all-and-sundry stressing the need for collaborative and concerted efforts to free Nigeria from any threats to lives.

Surv. Adebomehin noted that the heart of OSGoF goes out to all the gallant military men and women and the personnel of all other security organizations making huge sacrifices for Nigerians and Nigeria as he stressed the need for the support of all.
The meeting featured an exhibition of various administrative and operational maps produced by OSGoF

NO STATE HAS APPROVAL FOR AUTOMATIC WEAPONS IN NIGERIA