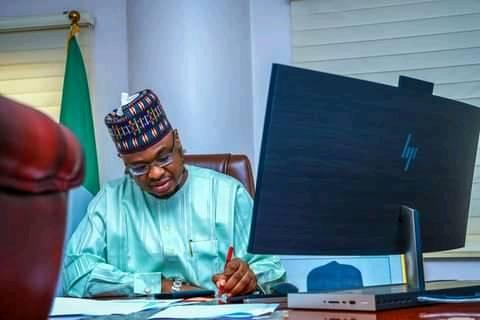 The Honourable Minister of Communications and Digital Economy, Isa Ali Ibrahim (Pantami), PhD, FNCS, FBCS, FIIM, today virtually Launched and Unveiled STORM; A Fibre connectivity and Digital Services platform, which is powered by Galaxy Backbone, for the South-East and South-South region of the country.

The launch is part of the implementation of the National Digital Economy Policy and Strategy for a Digital Nigeria (NDEPS), and also the National Broadband Plan 2020 – 2025. Both National policies were launched and unveiled by his Excellency, President Muhammadu Buhari GCFR.

The third pillar of the NDEPS (Solid Infrastructure) focuses on providing Internet Connectivity and Data Centres.

In his remarks as Chief Host and Special Guest of Honour, the Honourable Minister, Dr Pantami challenged the beneficiary states to make proper use of the service provided to them in order to drive economic development.

The Honourable Minister informed that STORM provides a platform to deliver fast and efficient internet and hosting services.

Dr Pantami reiterated the importance of Broadband Penetration, stressing that, Broadband is key to economic development and an enabler that will support other sectors of the economy.

The Minister informed that an increase in Broadband Penetration also brings about a corresponding increase in GDP. “The last two-quarter report released by the National Bureau of Statistics (NBS) collaborates this fact”, Pantami said.

Pantami commended the corporation between Galaxy Backbone and Interra Network, asserting that digitalization cannot be achieved in silos, but only through partnership and collaboration.

PRESIDENCY STATEMENT ON THE RECENT SUCCESSES OF SECURITY AND INTELLIGENCE AGENCIES

Lifting tech ideas into reality with a smart operations mindset

LAGOS SET TO EMPOWER ONE MILLION YOUTHS WITH DIGITAL SKILLS