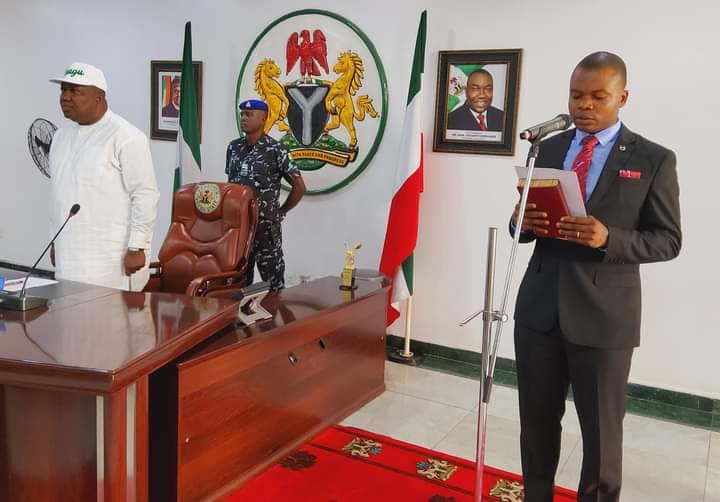 #Governor Ifeanyi #Ugwuanyi of #Enugu State, yesterday, swore in Kevin Nnaemeka Eze as his Special Adviser.
The swearing-in ceremony which was held at the EXCO Chamber, Government House, Enugu, was administered by the state’s Solicitor-General and Permanent Secretary, Ministry of Justice, Barr. Victor Emeribe and witnessed by the Secretary to the State Government, Prof. Simon Uchenna Ortuanya, the Deputy Chief of Staff to the Governor, Prof. Malachy Okwueze and the Commissioner for Special Duties, Hon. Mrs. Mabel Agbo.
This came as prominent stakeholders in Uzo-Uwani Local Government Area of the state, under the umbrella of “Friends Initiative for Gburugburu/Peter Mbah”, led representatives of the people of the council area to reassure Gov. Ugwuanyi of their unflinching support for him to represent Enugu North Senatorial District in the National Assembly in 2023 on the platform of the Peoples Democratic Party (PDP).
The Uzo-Uwani people also reaffirmed their support for the governorship candidate of the PDP in Enugu State, Barr. Peter Ndubuisi Mbah, his running mate, Barr. Ifeanyi Ossai, and all other candidates of the party in the state.
The people stressed their commitment to Gov. Ugwuanyi and the PDP, declaring that they are ready and willing to work for the success of the party at the polls.
Speaking when they visited Gov. Ugwuanyi at the Government House, Enugu, the Coordinator of “Friends Initiative for Gburugburu/Peter Mbah”, Rt. Hon. Anthony Chigbo, acknowledged the array of Uzo-Uwani political leaders who came for the visit, pointing out that they are united, resolute and determined to deliver on their mandate.
Rt. Hon. Chigbo, who pointed out that the Chairman of Uzo-Uwani LGA, Hon. Chukwudi Nnadozie is part of the group but was unavoidably absent because of an official engagement, maintained that “wherever the PDP is, is where this group is.”
He added that they have mobilised massively and will continue to mobilise the people of Uzo-Uwani LGA to vote for the PDP and its candidates in the 2023 elections.
Reiterating their support, the group’s coordinator told Gov. Ugwuanyi that “just as you will not lose one vote in Uzo-Uwani, we assure you that Barr. Peter Mbah will also not lose one vote in Uzo-Uwani.”
Corroborating the coordinator’s remarks, the group’s Treasurer, Dr. Romanus Ezike, added that “what we have come here for is reassurance for 2023,” revealing: “As we are coming here, our various villages have asked our senior members to go and reaffirm our commitment to you.
“We want to simply reassure you, Your Excellency, that the people gathered here and those at home are ready and willing to work for the success of our party.”
Other speakers such as the group’s Deputy Coordinator and former PDP Chairman of Uzo-Uwani LGA, Chief Albert Eze; the group’s State Publicity Secretary, Ozor Barr. Barth Ezea; the group’s patrons, Hon. Daniel N.K Okweli and Prof. Chris Chukwurah; Chidiebere Otti; and Dr. Godwin Chinonso Anigbo, spoke in the same vein, extoling Gov. Ugwuanyi’s remarkable achievements including the establishment of the State University of Medical and Applied Sciences (SUMAS), Igbo-Eno, Enugu State and the attraction of the Federal Polytechnic, Ohodo, Igbo-Etiti LGA.
They stated that their people are delighted that Gov. Ugwuanyi is the first leader in Enugu North Senatorial District in particular and Enugu State in general to record such landmark feats that had only been achieved by the late Nnamdi Azikiwe who attracted the prestigious University of Nigeria Nsukka (UNN) to the area.
Appreciating the governor’s sterling leadership qualities, they reassured him of their maximum support for his senatorial bid, that of the PDP governorship candidate, Barr. Mbah, the party’s candidates for Igbo-Etiti/Uzo-Uwani Federal Constituency and Uzo-Uwani Constituency, among others.
They pledged to continue to follow Gov. Ugwuanyi as their leader urging him not to be distracted by the detractors. They also beseeched God to continue to guide and protect the governor as he discharges his responsibilities.
Other dignitaries from Uzo-Uwani LGA at the event include the Administrator, Adada Development Centre, Hon. Chiemelie Dieke, the former Chairman of the council and LG Auditor of the group, Hon. James Ik Ademu, the group’s Secretary, Hon. Charles Chiamogu, former Deputy Chairman of the council, Hon. Maxwell Ugwuoke, the women mobilizer, Ebere Rita Anigbogu, Hon. Ikechukwu Otaba, Barr. Mellitus Nwabueze, among others.
Preview post

Kebbi flaggs off training of Health workers for Covid -19 Vaccination