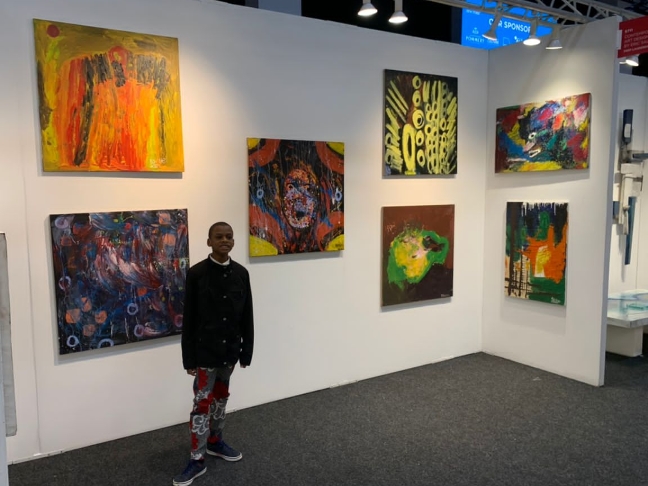 Nigerian child prodigy, Kanyeyachukwu chukwu Okeke’s strides in the art world is bringing more recognition to the country. Recently, Kanye as he is fondly called, was amongst the list of prestigious artists from around the world exhibiting their works at the prestigious New York Art Exhibition which took place at the popular Pier 36 Van Gogh auditorium in New York, United States of America. The event ran for 4 days between 26th – 31st of October and had artistes from all over the world but most especially those based in North and Southern America states, showcasing their works for art lovers and buyers to view.

Kanyeyachukwus presence and participation caused such a huge buzz at the event because not only was he the youngest artiste to ever showcase works here, but he is also one who is struggling with autism but doesn’t let it get in his way.

Kanye has over the years shown that children living with autism can make a difference in the world when given adequate support and through the support Kanyeyachukwu has gotten from friends, family (especially his mum and dad), institutions etc. his works have graced various galleries from Africa to Europe and now North America, thus drawing widespread commendation from his admirers.

An art enthusiast, collector , art critics , galleries and the organizers of the event, the Redwood Media Group, US, showered praise upon praise on Kanyeyachukwu as they remarked that “this is one of the most creative childs they have ever seen, especially from Africa. His works are world-class and his strokes are well mastered. He will go a long way in the art world”

Not done yet, Kanyeyachukwu in company of his parents and family, were accorded a welcome reception by Rytis Paulauskas, the President of the UNICEF who on behalf of the organization received one of the artists paintings, a donation titled “Basket of Unity” to help spread awareness about the scourge of autism and the “no child left behind” campaign of the artists K.A.S foundation.

It was all celebrations and outpouring of encomiums from all those who witnessed the ceremony at the UNICEF headquarters in downtown Manhattan New York as all, including the President of UNICEF were amazed at what they were seeing.

What could be said as the highpoint of that reception was when Kanyeyachukwu upon requesting for painting materials, began and produced a painting right there in the conference room where the reception was taking place and presented it to the President of the UNICEF as a personal gift to the utter astonishment of all present.

Speaking at the event, The Nigerian Permanent Representative to the United Nations (UN), Prof Muhammed Tijani -Bande who joined the President of UNICEF to receive the artist and his entourage said “This is a young man who has produced wonderful works, notwithstanding what seems like a disability, and he has shown that with good nurturing and support, any child can make it. I am really happy that he is sharing his talent to the world. We must know that special children like this must be guided and Kanye’s parents have done a wonderful work in this aspect.”

Rytis Paulauskas,the president of United Nations Children’s Fund (UNICEF) in his remarks while going through the brochure of his past works, declared that Kanyechukwus’ artworks are “outstanding” and that they send a clear message of hope that no child should or will be left behind. The reception and presentation rounded up with the presentation of the “no child left behind” official campaign T-shirt adorned with art works of the artist, to the UNICEF President and his team.

Still not done yet. The artiste and his entourage where again hosted to another memorable and heart warming reception as another masterpiece by Kanye titled “abundance” was this time unveiled at the Nigerian House in New York, the edifice that is still regarded as the pride of all Africans who live and work in New York.

Upon arrival, the group met with The Consul General Amb Amb Benayagha Bernard Mese Okoyen and were immediately ushered to the 2nd floor of the building, where the painting had already been well hung and positioned, awaiting its unveiling and a small reception had been organised.

Once again, it was a showering of encomiums and praise, starting with the Consul General Amb Benayagha Bernard Mese Okoyen , who spoke glowingly about Kanye and quite impressively spoke about autism and children with special needs as one of the issues they see everyday over there and how they take into cogniscance such issues when planning their days at work.

“When you realise that according to the CDC (center for disease control and prevention), in America alone 1 in 54 children has been identified with Autism Spectrum Disorder and about 1 out of every 6 children aged 3 – 17 years have been diagnosed with a developmental disability in the last 10 yrs. These figures are bound to get worse and even more here in our still developing Nation and continent and where it has become almost difficult to get accurate statistics concerning this problem as facilities to cater for them are still almost non-existent and so many parents still have stigmas and superstitious beliefs to deal with before the care for their child/children begins.”

Others who spoke at the Nigeria House unveiling of “abundance” where Kanye’s grandfather Chief Simon Okeke, who gave a glowing tribute to his grandson and Consul Natalia Adanu who is the Head of Admin in the consulate.

Kanye has over the years showcased and exhibited in many art exhibitions and galleries all over the world and today, his work stands tall at the headquarters of the UNICEF and the Nigeria House Nigeria Consulate both in New York, a testament to the gift in him.

His story has proven that with love and care, children, Special needs or not, with whatever ailment or condition, are still important and integral parts of us all. They can contribute to the betterment of the society, they can also be nurtured to live a productive and independent life once they are taken good care of hence the mantra “No Child Should Be Left Behind”. This Twelve year old child’s art and his story has shone bright lights on the issues surrounding the care for children with Special needs in Nigeria and the world at large.

Should you ever be a visitor to the UNICEF hq in new York, stop and ask for the site where Kanyeyachukwu’s painting is on display within the building. Should there also be any reason for you to visit the Nigeria House on 2nd ave New York, it would also be a good opportunity to have a look at this young mans abstract work on display and let pride and joy fill you up even as I assure you will be mesmerized.