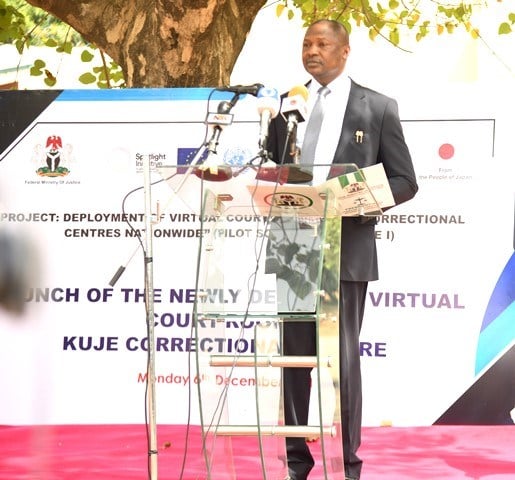 The Honourable Attorney General of the Federation and Minister of Justice, Abubakar Malami, SAN has said that the deployment of virtual court sitting technology in Correctional facilities was aimed at ensuring speedy dispensation of Justice and decongestion of custodial centres in the country.

Malami stated this at the launch of pilot project for the deployment and use of Virtual Court sitting facilities at the Kuje Correctional Centre, Abuja on Monday 6th December, 2021.

According to the AGF, “The essence of the launch of the virtual court sitting facilities is re-enactment and consolidation of spirit of Administration of Criminal Justice Act targeted at speedy determination of cases by way of eliminating delays and displacement of denial of justice which will further support our policy of decongestion of correctional centres across the country”.

The AGF said the project was initiated to ensure the hearing and determination of urgent and time-bound cases, using the digital platform.

He said, “This system would equally ensure speedy dispensation of trials in line with section 36(4) of the Constitution of the Federal Republic of Nigeria, 1999 (as amended), which provides that every person shall be entitled to fair hearing within a reasonable time”.

He explained that it would also eliminate the issue of difficulties in conveying the inmates to court and would further ensure the safety and security of the inmates and law enforcement officers.

According to him, “We are no longer constrained by mobility, space and time in the justice delivery on account of accommodation of the virtual court sitting facilities and deployment of incidental technology”.

“Notably, our justice system is founded on the constitutional principle of fundamental rights to fair hearing that requires the court to hear and determine cases in public and the physical presence of the suspects or parties in court”
The AGF said that the Virtual Court Proceedings are in compliance with the provisions of section 36(3) of the Constitution, which provides for public court sitting or hearing.

Furthermore, the Virtual Court Proceedings would meet up with the expectation of the Constitution and are not private hearings but open to the respective counsel involved, the litigants (inmates) and the general public at large.

In his goodwill message, the Honourable Minster of Interior, Rauf Aregbesola advocated for inclusion of terminal dates in the administration of justice act for quick dispensation of justice in the country. He explained that it would also aid decongestion of prisons across the country.

He said that the project which was fully funded by the UNDP, and supports from the government of Japan was aimed at supporting an Inclusive and multi-Sectoral response to COVID-19 and Addressing socio-economic impact.
Aregbesola noted that many of those in the custody stayed longer than the prescribed period of terms by the law.

He therefore specifically urged the AGF to liase with the Chief Justice of Nigeria to speedily work out terminal dates for cases to help reduce prison congestion in Nigeria.

In her welcome address, Mrs. Leticia Ayoola-Daniels, Acting Director Administration of Criminal Justice and Reforms Department Federal Ministry of Justice, who doubles as Secretary of the Presidential Committee on Correctional Reforms and Decongestion, expressed hope that these virtual court facilities will feed into the already existing virtual court sittings that are in the judiciary, and by so doing fast track the dispensation of court cases while saving costs on security and mobilization of accused persons.

Speaking, the Controller General of the Nigeria Correctional Service, Haliru Nababa said the target of the initiative is to significantly address the perennial challenge of overcrowding in most of their urban facilities.

According to him, the significant note is the fact that Virtual Court room sessions will also drastically reduce the cost and danger of conveying awaiting trial persons to and from courts.

In a goodwill message, UNDP Nigeria Country Representative, Lealem Berrhanu Dinku said its organization is in partnership with the Federal ministry of justice and the Government of Japan to launch the programme to deploy virtual courts in Correctional Centres nationwide, with Kuje Correctional Centre in Abuja as its first pilot location.

He explained that the programme was designed to support the court system to accelerate the hearing of Sexual and Gender-Based Violence/Harmful Practices/Sexual and Reproductive Health and Rights/Violence Against Women and Girls civil and criminal cases, and will allow judiciaries to hear cases without transporting inmates to physical locations.

Dinku added that the project will help to reduce backlog and the time spent in pre-trial detention while also helping to reduce administration and operational costs.

The project was fully funded by the UNDP, with funds from the government of Japan (Supporting an Inclusive & Multi-Sectoral Response to COVID-19 and Addressing Socio-Economic Impact).

The deployment of the project was overseen by Leticia Ayoola-Daniels, Acting Director, Administration of Criminal Justice and Reform department, Federal ministry of Justice and Mrs. Onyinye Ndubuisi of the UNDP.

In her closing remarks Mrs. Onyinye Ndubuisi of the UNDP expressed appreciation to the Attorney General, Nigerian Correctional Service and other Stakeholders for their attendance. She added that the innovation was a welcome development as the pilot scheme commenced.

Following the launch of the Virtual Court Rooms, the Presidential Committee on Correctional Reforms and Decongestion in collaboration with the Federal Ministry of Justice, after careful deliberation effected the release of 15 inmates with minor offences with an option of fine. The fines were paid and their releases effected.