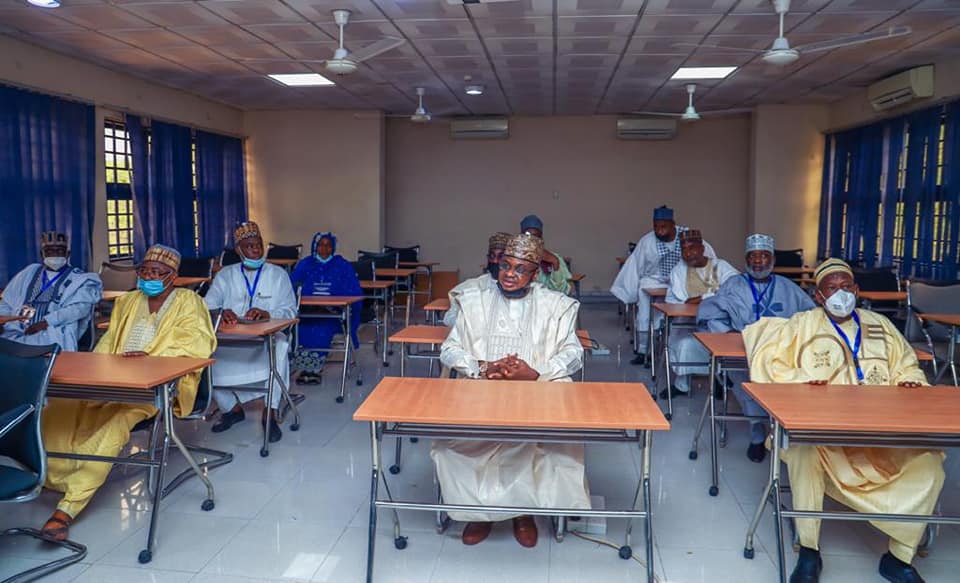 With the zeal of strengthening the partnership between the various tiers of government in Nigeria to apply digital technology in governance, the Honourable Minister of Communications and Digital Economy, Isa Ali Ibrahim (Pantami), PhD has formally flagged off a capacity development programme on eGovernance and Digital transformation for Kano State Executive Council Members chaired by His Excellency, Gov Abdullahi Umar Ganduje.

The programme aims at tutoring the top state government officials on the application of modern technology to improve performances at all levels and also deliver services and programs more efficiently, transparently, and cost-effectively.

In his Keynote address, the Honourable Minister, Dr Pantami applauded the state for the plan to deploy fibre optics across its boundary within the next two years, stressing that the move is in alignment with the National Digital Economy Policy and Strategy for a Digital Nigeria (NDEPS), launched and unveiled by His Excellency, President Muhammadu Buhari on 29th November 2019. “This policy cannot be implemented by the Federal Government alone, state governments need to key in”, Pantami said.

The Honourable Minister then urged the council members to take full advantage of the training, stressing that e-governance is key to the success of any economy at all levels.
Minister Pantami also called on the Kano state government to adopt other initiatives and strategies of the Federal Government such as the Nigeria Interoperability Framework, and the Nigeria e-government Enterprise Framework and make them the mirror for the implementation of e-governance in the state.

Dr Pantami further advised the state government to study other National policies of the Federal Government and key into them so that the IT investment plans of the state will be in alignment with that of the federal government and also ensure interoperability.

“E-governance is a necessity for the success of every government”, Pantami said, adding that, “according to the World Bank diagnostic report of 2019, it was projected that by 2025, e-commerce activities in Nigeria will reach up to USD 75 Billion within a year”.

“COVID 19 has exposed the need for digitization, which is now a necessity”, Pantami stated.
Pantami furthermore disclosed the donation of over 100 digital devices to the state by the Federal Government and called on the beneficiaries to make good use of the devices to be provided.

The Minister revealed that the Ministry is open to partnership with all state and local governments that expresses interest to key into the NDEPS.

On his part, Gov Abdullahi Umar Ganduje appreciated Dr Pantami for matching words with action following his visit to the Communications and Digital Economy Complex in Abuja where he initiated talks on the possible collaborations and partnerships with the Ministry to foster ICT development in Kano state.

The Governor also thanked the Ministry for the provision of digital intervention projects in the state such as a digital training centre which is ongoing and also the consideration to use Kano as the pilot state for the GOVERNMENT DIGITAL TRANSFORMATION training.
Gov Ganduje similarly expressed gratitude for the training of over 1000 youths from the state on digital skills and also the support rendered to the state to come up with a State ICT policy which he described as the blueprint guiding the state over the years.

The Executive Governor further solicited support from the Ministry to update the policy to reflect current realities.