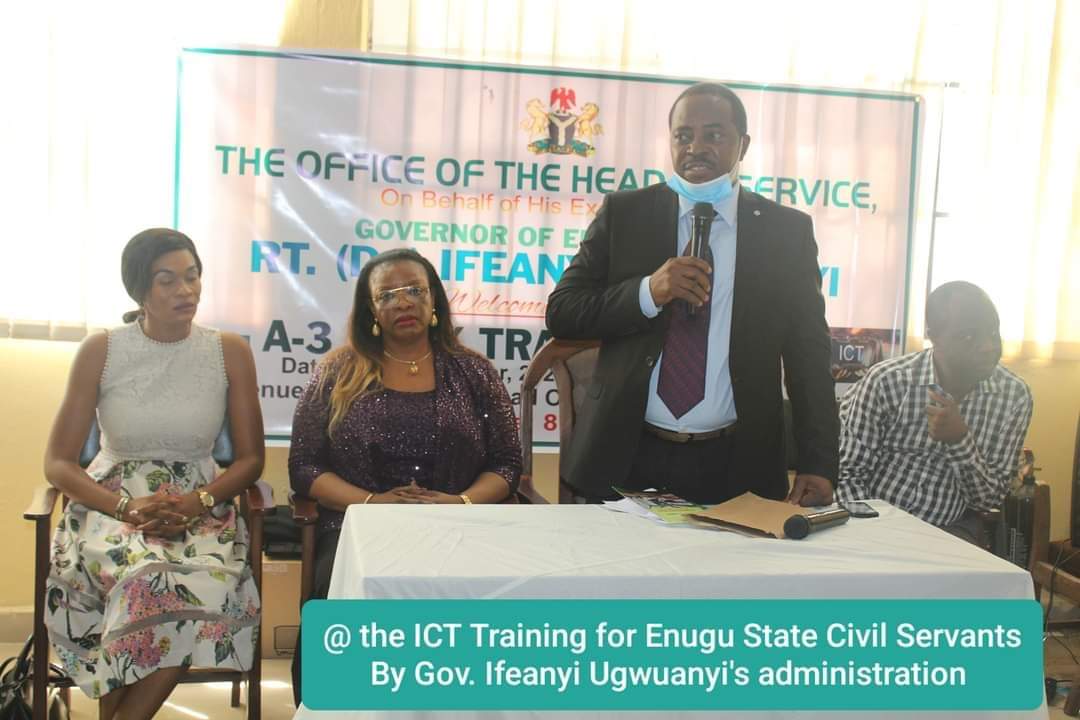 …As #EndSARS panel commences sitting to determine compensation for victims

Sequel to the approval of Governor Ifeanyi Ugwuanyi of Enugu State, the Office of the State Head of Service, on Monday, commenced a three-week training for civil servants in the area of Information Communication Technology (ICT).

Declaring the training open, the State Head of Service, Mr. Ken Chukwuegbo, disclosed that the essence of the exercise was to enhance the intellectual ability of the civil servants to meet up with the demands of modern administrative engagements.

Mr. Chukwuegbo pointed out that “to get a civil service knowledge-based society; training is utmost”, stressing that “for any government to be successful, it requires the inputs of civil servants”.

The Head of Service therefore commended Gov. Ugwuanyi for being in the vanguard of changing the face of the civil servants in the state through innovations, reforms and commitment to their welfare.

He advised the trainees to show utmost interest in the programme by paying attention to what they would be taught, “knowing full well that when you acquire new knowledge, you acquire new skills; not just for the government but for self development, so that you can cope with the challenges that are associated with your duties”.

In another development, the newly inaugurated Administrative Panel of Inquiry for the determination of compensation for loss of lives and properties resulting from the unfortunate hijacked EndSARS protests in Enugu State, held its inaugural meeting at the State High Court in Enugu, calling on those who submitted memoranda to appear before the panel.

Presenting the rules and procedure of the panel, the Chairman, Hon. Justice Frederick Obieze (Rtd.) disclosed that persons who may lodge complaints before the panel are “a victim of the hijacked #EndSARS protest in Enugu State” and “a family member(s) of a victim(s) where the victim is dead, incapacitated by injury of body or mind, outside the jurisdiction of Enugu State or is otherwise unable to appear in person to present his or her grievance or complaint in person”.

Speaking further Hon. Justice Obieze added that such person(s) include(s) “an agent, lawyer or other representative of a victim or family member of a victim who shall show apparent authority, either written or otherwise recorded by audio or video giving him or her the authority to act on behalf of such victim or the family of such victim” and “the Nigerian Bar Association or any such public interest group or body”.

Also speaking, a member of the panel, Prof. Frank Ezugwu, pointed out that the complaints should be backed up with credible evidence, adding that the complainants must be present in person.

Meanwhile, the Permanent Secretary, State Ministry of Labour and Productivity, Mrs. Chinwe Anibeze, who represented the Chairman of the ICT training committee, expressed delight at the training exercise for the civil servants and assured that it will bring positive development to the state.

In his remark, the Resource Person and Director, Information Technology, Enugu State University of Science and Technology (ESUT), Dr Lois Ifeanyi-Nwobodo, said that the training will make the civil servants in Enugu State to be ICT compliant.

Enugu State is in the hands of God

ICT IS A MAJOR CONTRIBUTOR TO NIGERIA’S GDP – DG NITDA