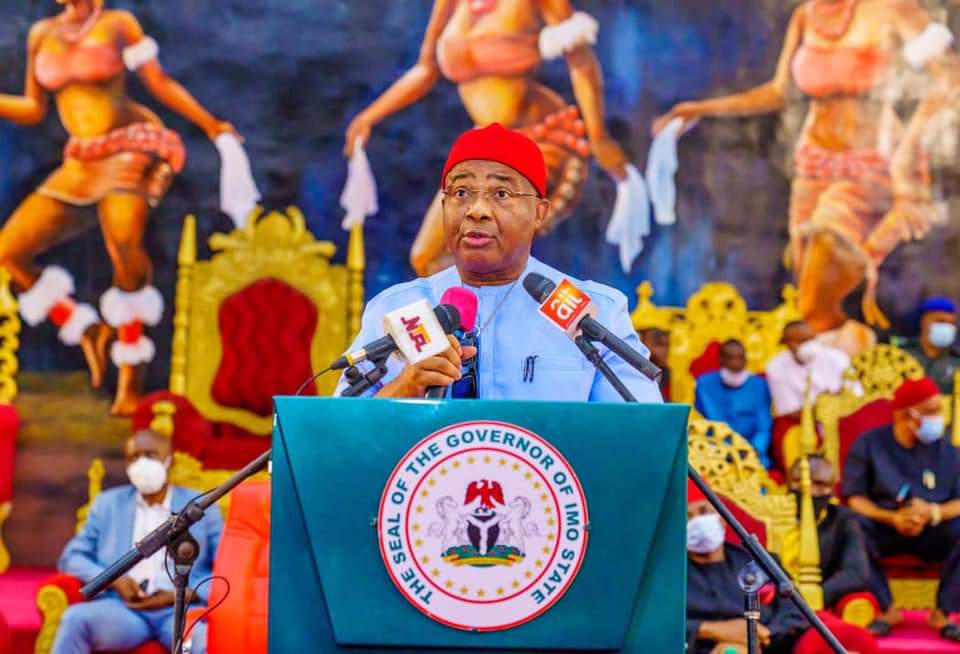 Gov. Hope Uzodimma has again demonstrated his unflinching resolve and determination to recover imo commonwealth that was looted and stolen in the past by both government officials and public servants. This riot act was read out to imolites during the just concluded Imo State Stakeholders Meeting held at the Eze Imo Palace and the 4th time in a row the meeting is taking place in the state.

There is no doubt that the declaration by the state government to recover all is of the best interest of Imolites as no one person or group of persons can mortgage the collective resources and properties of the state for their selfish reasons. This act has been going on unchecked by previous administrations which questions the essence of governance and how effective it is on the people being governed.

The 3R mantra initiative of the present administration is not in any “foot dragging” on the recovery process as it has already begun and while the affected persons may see it as a witch-hunt or political vendetta, Gov. Hope Uzodimma has exhibited political strength and maturity in recovering the assets of the state government.

It is brazenly clear that the governor in his speech to the Imo State Stakeholders had stated it clearly that;

i. We will use all legal means to recover all imo properties: This is to dispel any form of insinuation that the activities of his government including the recovery process are not legally bounded. Every recovery move is in clear conformity of the recommendations of the panel set to that effect and nothing has been done so far beyond the limits of the law as this present administration will not tolerate any act of lawlessness.

ii. Any man or woman who has Imo property, please bring them out now: This may look like government pleading with the state looters but in contrast to that the shared prosperity government of Gov. Hope Uzodimma do not negotiate with the enemies of the state in all ramifications rather the state government is extending an olive branch to them all and only the wise can cease this opportunity to vindicate themselves. Indeed this government is for all.

iii. Those who took lands from the government and from private individuals will be forced to return it to the owners: This explains the essence of governance whereby even the least person in the society can have the confidence reposed in the government that his or her properties illegally collected will be returned back. Gov. Hope Uzodimma by this singular act has redefined governance and whereby the carrot approach is not appreciated then the use of force will be applied within the detects and supervision of the law.

iv. This is my covenant with my God and my covenant with Imo people. Power belongs to the good people of imo state: This assertion puts it on record that Gov. Hope Uzodimma’s government is divine and works in accordance with will of God for Imolites and nothing done by him is against the people and that is why his activities so far has proven to be people oriented. A leader who believes that power belongs to the people is indeed conscious of how to use the power in a more positive way rather than for personal aggrandizement and Gov. Hope Uzodimma is a purposeful leader.

In all, the state government has made bare the essence and means of going about the recovery plan and well meaning imolite will agree that Gov. Hope Uzodimma is a man of law and order and should be supported in getting back our commonwealth which in turn will be used for the development of the state. Let nobody deceive you with counter opinions other than this about the recovery moves of the state government as we are aware that while fighting corruption, corruption will likewise fight back and propaganda is one of its weapons so avoid been weaponized to spread such lies against the state government and her activities.

Bawa hands over in Lagos