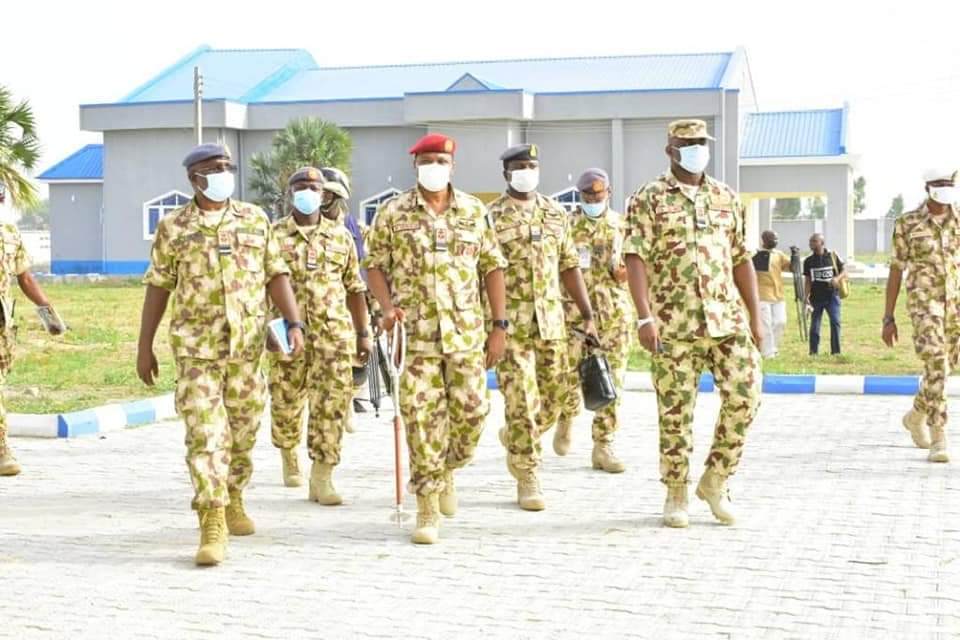 As part of efforts to further boost the effectiveness and efficiency of air operations in the fight against armed banditry in the Northwest of the Country, the Nigerian Air Force (NAF) is set to deploy 4 Unmanned Combat Aerial Vehicles (UCAVs) as well as construct a runway and ancillary facilities for the UCAVs in Gusau, the Zamfara State capital. The Chief of the Air Staff (CAS), Air Marshal Sadique Abubakar, disclosed this today, 5 November 2020, while on a one-day operational visit to Gusau to inspect the site for the proposed runway and other facilities, which are expected to serve as the Northwest UCAV Base for the NAF. The visit, which began with a courtesy call on the Zamfara State Governor, Dr Bello Mohammed Matawalle, also afforded the CAS the opportunity to inspect some facilities at NAF Base Gusau.

Speaking during the courtesy call at Government House Gusau, Air Marshal Abubakar, while profoundly thanking the Government and good people of Zamfara State for their support and hospitality to the NAF since the establishment of the 207 Quick Response Group (207 QRG) in the State, expressed satisfaction with reports that NAF personnel operating under Sector 1 of Operation HADARIN DAJI had been performing their assigned tasks professionally, in synergy with other security agencies, whilst also ensuring cordial relationship with host communities. He disclosed that he was in Zamfara State at the instance of the Commander-in-Chief (C-in-C) of the Armed Forces of Nigeria, President Muhammadu Buhari, who had authorized the construction of a runway and ancillary facilities in Gusau for the deployment of 4 newly acquired UCAVs to cover Zamfara, Sokoto, Kebbi and Katsina States as well as parts of Kaduna State.

While highlighting the capabilities of the UCAVs, the CAS noted that the unmanned aircraft could remain airborne for up to 26 hours providing persistent presence over areas of interest. He revealed that the four UCAVs were part of the 8 UAVs recently acquired by the Federal Government to enhance the Intelligence, Surveillance and Reconnaissance (ISR) as well as strike capabilities of the NAF not only in the fight against armed banditry in the Northwest and North Central but also in counterinsurgency operations in the North East. He revealed that 2 UCAVs were to be deployed at the newly established 203 Combat Reconnaissance Group in Gombe and the 2 others at the Air Task Force, Operation LAFIYA DOLE Headquarters in Maiduguri. He added that these were in addition to the 22 brand new aircraft already acquired by the Federal Government for the NAF in the last 5 years, along with the 19 additional aircraft being expected before the end of the second quarter of 2021. The CAS noted that these additional aircraft included 12 x A-29 Super Tucano attack aircraft, 3 x JF-17 Thunder Fighter Jets, an additional Mi-171E utility helicopter as well as 3 special missions aircraft that are expected to be handed over to the NAF from NIMASA for maritime air operations.

Speaking further, Air Marshal Abubakar revealed that about 195 NAF personnel were undergoing various ground and aircrew training in 9 different countries across the world to ensure that as soon as these additional aircraft arrive Nigeria they would be effectively and efficiently utilized to further enhance the security of Nigeria and Nigerians in the various theatres of operation. He further disclosed that, while the main purpose of the new runway facility being constructed was to service the UCAVs, other aircraft could equally use the airfield once completed. He however noted that the deployment of the new UCAVs as well as the personnel to man them would require the emplacement of additional infrastructure at the NAF Base, which would undoubtedly require additional land. He therefore appealed to the Governor to provide the additional land for the NAF. The CAS ended his remarks by encouraging the Royal Fathers and Spiritual Leaders present at the event to support the NAF and other security agencies by providing intelligence which, he said, was critical to the effective conduct of operations in sub-conventional warfare scenarios like armed banditry. He noted that such information would always be treated with utmost confidentiality and further cross-checked for accuracy before use.

In his response, Governor Matawalle appreciated President Muhammadu Buhari for swiftly responding to the cries of the people of Zamfara and acceding to their request for additional facilities that would enhance the security of the State. He stressed that Zamfara State would remain eternally grateful to the C-in-C for authorizing the construction of the runway as well as the deployment of the UCAVs to Gusau. He equally thanked the CAS for the speedy action taken to commence implementation of the project, whilst also commending him for the unwavering commitment shown by the NAF and the tremendous contributions made by the Service in dealing with the menace of armed banditry. The Governor emphasized that security was not the exclusive responsibility of security agencies but required the involvement of every member of the society. He therefore urged the people of the State to heed the CAS’ call by providing useful intelligence to security forces.

Speaking further, Dr Matawalle said the Zamafara State Government, while continuing to apply both kinetic and non-kinetic means in dealing with security challenges in the State, would continue to exhibit zero tolerance for any subversive elements who provide information or safe havens to bandits or support their operations in any way. He noted that it was auspicious that the CAS’ visit coincided with his meeting with Royal Fathers and Spiritual Leaders in the State, which had been convened to further galvanize their support for the Government towards dealing with the issue of armed banditry in Zamfara State. While assuring the CAS of the State Government’s continued support, the Governor gave immediate directives for the provision of additional land to the NAF.

The CAS, who was accompanied on the visit by the Air Officer Commanding Special Operations Command, Air Vice Marshal (AVM) Charles Ohwo as well as the NAF Chief of Logistics, AVM Mohammed Yakubu, and other senior NAF officers, was thereafter conducted by Governor Matawalle on a tour of the land allocated by the Zamfara State Government for the runway project.

You’re safe from ransomware – if you have R6.4bn lying around