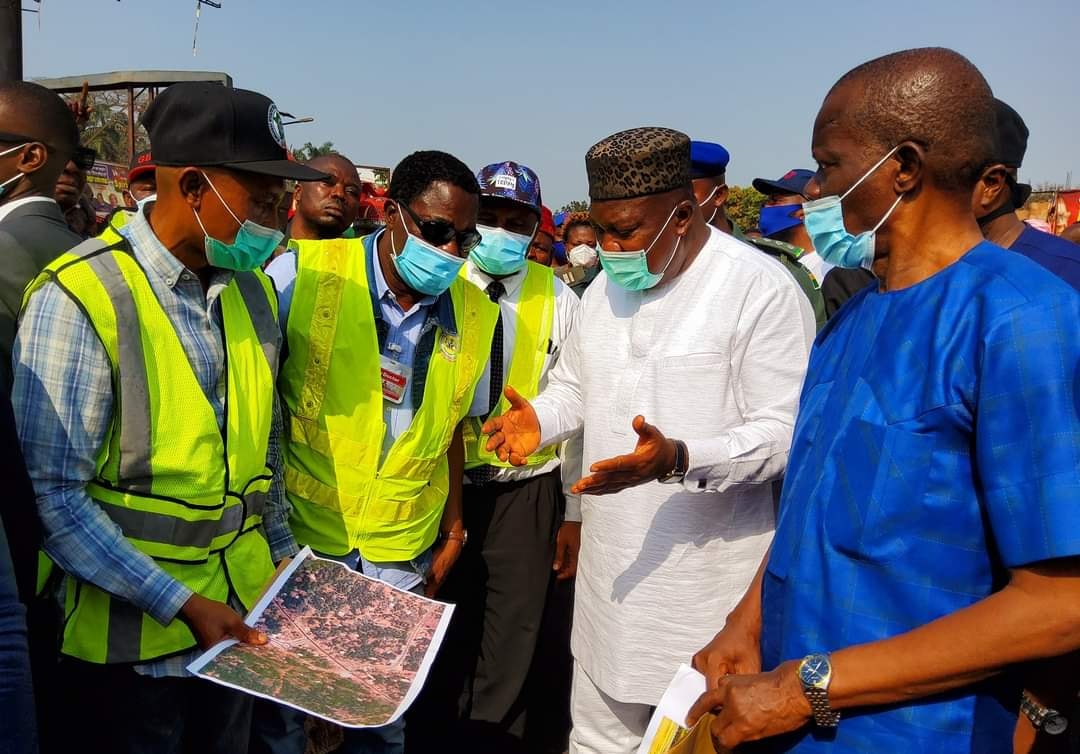 Determined by his vision to include Nsukka in the world map of history with a landmark edifice, Governor Ifeanyi Ugwuanyi of Enugu State, on Tuesday, inspected the site for the construction of an iconic roundabout and tower, located at the popular Opi Junction, about 12km from the University of Nigeria, Nsukka (UNN) Campus.

Gov. Ugwuanyi who was accompanied by his Commissioner for Works and Infrastructure, Engr. Greg Nnaji, the Controller of Works, Federal Ministry of Works and Housing, Engr. Femi Oyekanmi and the Airspace, Manager, Nigerian Airspace Management Agency (NAMA), Akanu Ibiam International Airport, Enugu, Iliya Yohana, disclosed that the major purpose of the inspection tour was to obtain approval from the two federal agencies for the commencement of the all-important project.

Gov. Ugwuanyi explained that the roundabout and tower will be a deserving identity of Nsukka, stressing that the second largest city in Enugu State, which was hitherto neglected, truly deserves major facelifts in terms of infrastructural development.

“We called NAMA to approve this project because of the height of the tower, to ensure that it won’t be an obstruction to flights”, he explained.

Gov. Ugwuanyi also thanked the stakeholders of Nsukka zone, especially the owners of the land where the roundabout and tower will be sited, the Federal Controller of Works, Ministry of Works and Housing, Odinma Nsukka, the youth, among others, for granting approval for the commencement of the project.

Reiterating his resolve to serve Enugu State with the fear of God, Gov. Ugwuanyi pledged to continue to deliver on his promises to the people of the state in spite of various challenges confronting the nation.

Earlier in his speech, the State Commissioner for Works and Infrastructure, Engr. Nnaji, revealed that the project is contained in 2021 budget.

On his part, the Controller of Works, Federal Ministry of Works and Housing, Engr. Oyekanmi, who endorsed the construction of the roundabout and tower, commended Gov. Ugwuanyi for seeking the assessment and approval of the Ministry and NAMA before the commencement of the project, stressing that such approach “is novel”.

Also speaking, the NAMA Airspace Manager, Yohana, equally applauded Gov. Ugwuanyi for seeking the agency’s approval, stating that “we will look at the technical drawings and give the necessary advice”.

The Council Chairman, Hon. Barr. Ugwueze, the two lawmakers, Rt. Hon. Nwamba and Hon. Ugwuerua, the traditional ruler of Agu Opi autonomous community, HRH Igwe Pius Agbo, representatives of Odinma Nsukka, on behalf of the people of Nsukka zone and Opi communities, expressed their profound gratitude to Gov. Ugwuanyi for initiating the project, which they said will go a long way to decongest traffic and place the area in the world map of history with a unique and deserving identity.

Mkpụlụ mmịlị: Crystal Meth and The Impact in South East and Nigeria

OSIBANJO PLEASED WITH THE ESTABLISHMENT OF EKO FASHION HUB