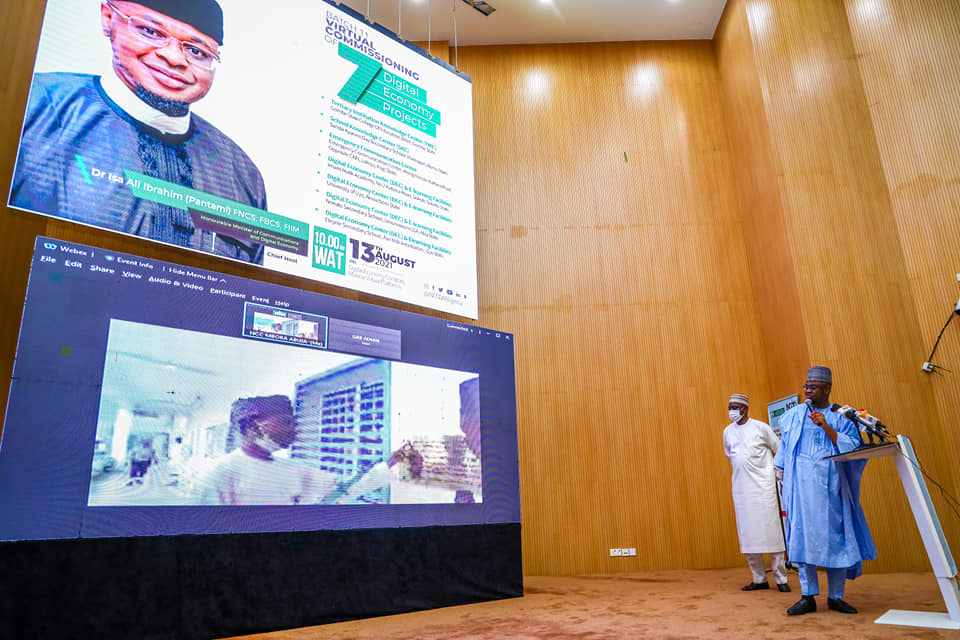 The Honourable Minister of Communications and Digital Economy, Dr Isa Ali Ibrahim (Pantami), today Friday 13th August 2021 in line with the National Digital Economy Policy and Strategy, commissioned seven more projects across the country in furtherance of the Federal Government’s resolve to leverage on technology in empowering the nation. This brings the number of projects established under the leadership of Dr Pantami to over one thousand, six hundred and sixty seven across all geo-political zones in the country.

Speaking at the hybrid event, the Honourable Minister noted that the sector had witnessed unprecedented growth both infrastructurally and policy – wise within two years of his assuming office. “When we came on board in August of 2019, the ministry had only one valid policy which was sponsored by the Korean Integration and Cooperation Agency, KOICA. But within the time we have been in office, we have developed sixteen national policies and established over one thousand six hundred and sixty seven digital economy centres. Of the sixteen policies we have developed, twelve are already being implemented while four are awaiting approval from the Federal Executive Council”

Recall that under the leadership of Dr Isa Ali Ibrahim (Pantami), every state of the federation is a beneficiary of the digital economy projects.

NCC Committed to Facilitating Growth of e-Government, others – Danbatta

From criminal enterprise to big business: The evolution of ransomware reaches new, dangerous levels of sophistication