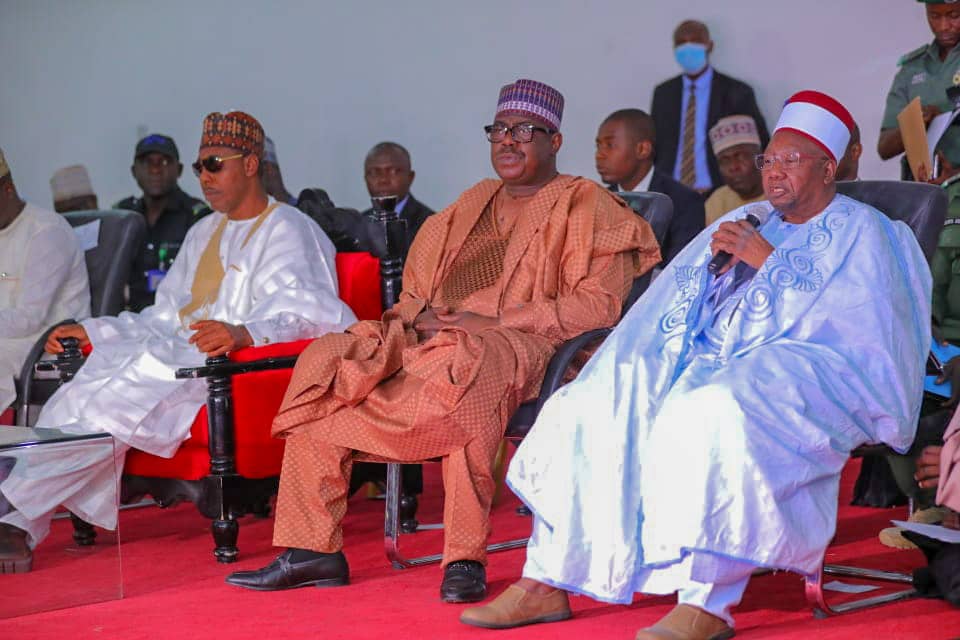 The Minister of State for Agriculture and Rural Development, Hon. Mustapha Baba Shehuri has commended the peaceful conduct of Borno youths during the EndSARS protest and reiterated the federal government’s commitment towards addressing all their grievances.

He appealed to all Nigerians, particularly the youths, to embrace peace and stop the looting of warehouses across the country while addressing youth leaders and stakeholders in home state, Borno.Speaking during the Presidential Stakeholders meeting held at the Government Hall in Maiduguri, Borno State, the Minister, Hon. Mustapha Baba Shehuri stated that “Mr. President in his nationwide broadcast emphasized that the youth were heard loud and clear with a pledge that the 5 – point agenda they raised, would be addressed accordingly”.Shehuri stated that the present administration is working hard through many pragmatic ways to mitigate the hardship faced by the citizens in the wake of the global COVID -19 Pandemic which has altered the dynamics of global governance, Nigeria inclusive.

The Minister informed that the ” the idea of this Presidental engagement of Stakeholders and youths is initiated by Mr President to provide the needed platform where aggrieved parties, youths, community leaders, religious leaders, professional and political leadership are expected to rub minds and develop a pragmatic approach that will rekindle hope and aspirations of our people and to help bring about lasting peace, security and development “.He stated that ” this platform provides an opportunity to solicit for more support of the political, traditional, religious, youth and women leaders in the State against the wanton destruction of lives and properties resulting from EndSARS protest”.He emphasized that ” peaceful demonstration is a constitutional right of every citizen but infringing on other people’s rights, looting, killing of innocent souls and other criminal acts that will breach public peace and national stability is not acceptable”.

The Minister pointed out that the projects executed by the Federal Ministry of Agriculture and Rural Development include: ” the provision of 3 solar-powered boreholes in Maiduguri, Bama, and Jere, provision of 1 motorized borehole in katsina road, Maiduguri and provision and installation of 15 units of 60 watts all in one solar street light in potiskum road, Maiduguri among others.

He stated that ” our march to the attainment of sustainable food security, employment, revenue generation, production and supply of raw materials to Agro-industries, promotion of market accessibility and competitiveness for foreign exchange earning and Rural socio-economic development is fully guaranteed through various agricultural programs and projects put in place by this administration “.He added that improvements are aggressively being pursued in areas of Agricultural Mechanization, Agricultural research, extension services, land development amongst others. Shehuri noted that the “ Federal Government policy of closing the borders has resulted in a phenomenal increase in local rice production and value increase, curtail smuggling activities injurious to our economy and boost our internally Generated Revenue “.

The Minister said that ” Mr. President has specially commended the decorum exhibited by the youth in Borno State during the recent widespread protest and further advised that they maintain that peaceful conduct, brotherhood, and communal harmony so that the State can spring back to its historic amiable position as the center of peace in the country “He solicited for continuous support, cooperation and understanding of the Borno State Governor, Prof. Babagana Zulum, traditional, Youth and religious leaders in achieving the national goal of a prosperous stable and peaceful Nigeria. In his remarks, the Executive Governor of Borno State, His Excellency, Prof. Babagana Zulum appreciated the restraint shown by the youths for not participating in the protest which he said is not unconnected to the efforts of all stakeholders in Borno.

Governor Zulum stated that his administration had initiated viable projects to transform the state, adding that he remains focused on reconstruction, rehabilitation, and resettlement of persons affected by the insurgency. Earlier in his goodwill message, the Shehu of Borno, Abubakar Umar-Garba Ibn El-Kanemi, commended the youths for not participating in the protest and described the parley as timely. He also lamented the backward trend in the state in terms of western education and revenue generation, he urged parents to enroll their wards in school.El-Kanemi urged the Federal Government to resume oil exploration in the Lake Chad Region, which was abandoned due to the insurgency.

NIGERIANS URGED TO PRAY AND BELIEVE THAT GOD WILL HEAL THE NATION AT THE NATIONAL WOMEN PRAYING CONFERENCE, ABUJA

FALSE: ALLEGATION ON TROOPS INVOLVEMENT IN FISHING AND FARMING ACTIVITIES IN BAGA TOWN.