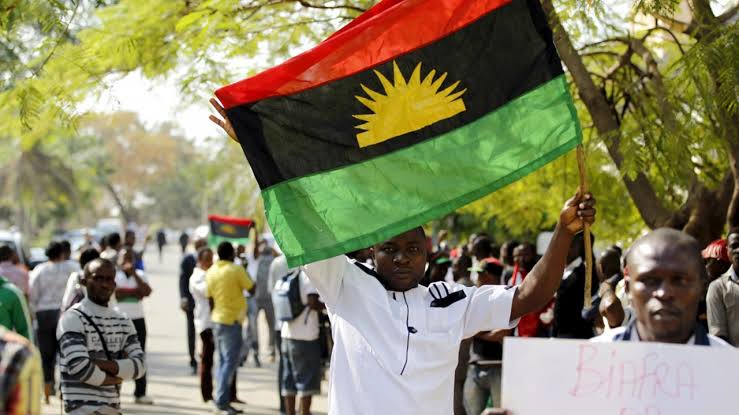 Rivers state governor, Nyesom Ezenwo Wike, has charged the 23 council chairmen, and youths in the state to fish members of the proscribed Indigenous Peoples Organisation of Biafra (IPOB) in the State.
Governor has also warned that any council chairman that allows IPOB to hold processions and hoist its flag within their jurisdiction in Rivers State, risk sack.
He made this assertion during a meeting with all the 23 Local Government chairmen, Community Development Committees and youths leaders at the Government House, in Port Harcourt on Monday.

The governor described Rivers state as the most accommodating state for all Nigerians. To buttress this, he stated that here has never been any historical incident of different ethnic groups clashing in the State as has been the witnessed in other parts of the country.

Governor Wike, however, maintained that while the people of Rivers State believe in the unity of the country, they will not allow criminals under the aegis of a terrorist group called IPOB to continue to threaten the stability of the state.

Infuriated by IPOB’s effrontery to hoist its flag in Oyigbo, the governor directed the council chairman to ensure there will not be another occurrence of this treasonous act.
“Go to Oyigbo and see what they have done. Destroyed the court. What did the court do? See the soldiers they killed and burnt them. See the policemen they killed and burnt them and then you said people will sit and fold their arms”.

The governor, while calling for vigilance on the part of Rivers people, however, warned sternly that IPOB members should not delude themselves because Rivers state cannot be colonised or annexed by any group, particularly, while he is still the incumbent governor of the State.
He asserted that Rivers state can never be annexed to any state, to any zone. According to him, Rivers state is Niger Delta and will remain in Niger Delta.

He explained that while every Nigerian is allowed to reside in Rivers State, but those who wish to do so must live in peace with the people of the State.

“Ibos are living and doing their business here and they will continue to live and do their business here. We support that.
But that terrorist group call IPOB, cannot determine what happens in our state. To tell us where they own. It will never happen and we must not allow it to happen”.
Governor Wike charged all chairmen of councils, youth leaders, CDCs to go into their various communities and identify all those IPOB members. He has meanwhile emphasied that nobody of Ibos extraction legitimately residing and doing business in the state must be harassed.

He called on the people to defend the territory of Rivers State and ensure no part of the State is annexed by a criminal organisation or terrorist organization.
“We cannot allow it. All our vigilantee groups must be encouraged. Everybody must be at alert. Work with the security agencies to make sure nothing call IPOB exist in this state. No procession. Not even a meeting anywhere. Identify where they hold meeting” he said

Rivers State Commissioner of Youth Development, Hon. Ohia Prince Obi, lauded the governor for interfacing with the youths as this will give them a sense of belonging in the affairs of the State.

The chairman, National Youth Council of Nigeria in Rivers State , Chijoke Ihunwo, appeal to Governor Wike for clemency for wanted , Stanley Mgbere, who led IPOB members to attack the palace of the king of Onne, was rejected.

LASBCA DENIES ALLEGATION OF EXTORTION BY BUSINESS OWNERS AT MMIA

Moppet Baby Food: Our Journey So Far & Why We Introduced It Into The Market – Roberta Edu

THE HISTORY OF THE CHRISTIAN WAR AGAINST AFRICAN TRADITIONAL RELIGION: ACHIEVEMENTS AND/OR MISTAKES?