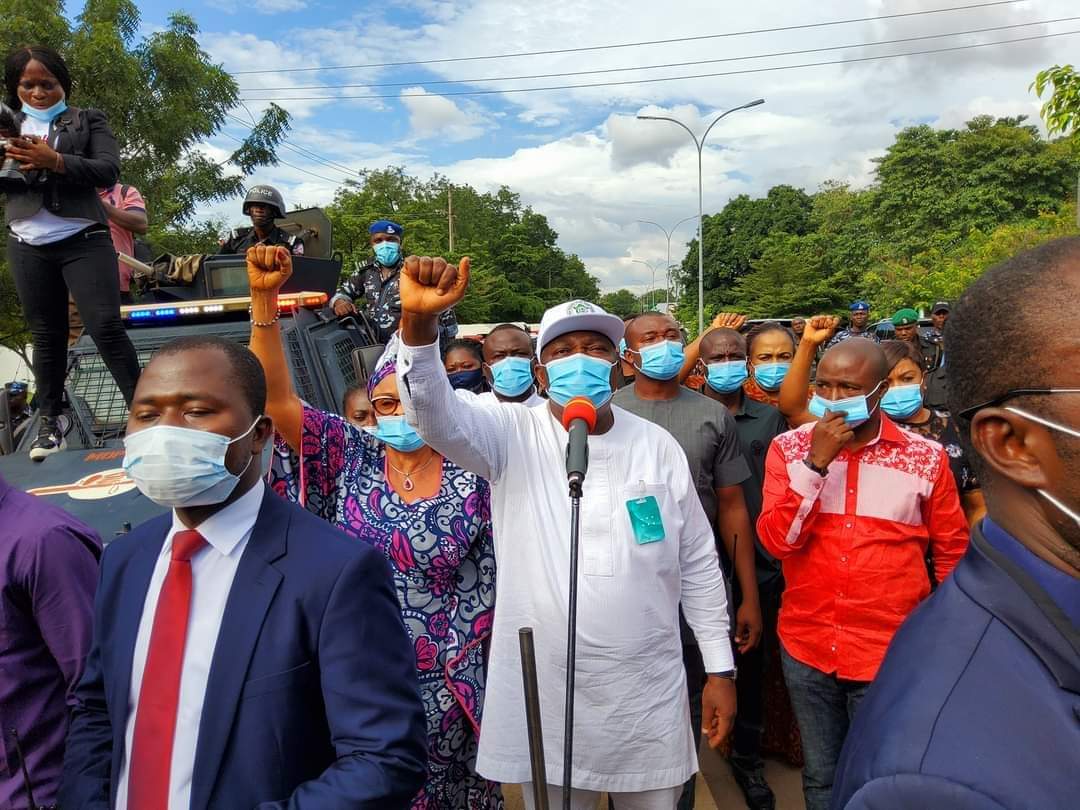 Governor Ifeanyi Ugwuanyi of Enugu State, on Saturday, for the second time in two days, addressed youths in the state who were protesting against #PoliceBrutality in the country, announcing the setting up of a Judicial Panel of Inquiry to investigate complaints of police brutality or related extra judicial killings, as demanded by the protesters.

Gov. Ugwuanyi who addressed the #EndSars protesters amid cheers, reiterated his government’s position on the demands made by the protesting youth and disclosed that the panel will be chaired by a High Court Judge with two representatives of the Civil Society Groups and one retired Police Officer of high repute as members.

The governor who applauded the protesters, led by two prominent artists, Flavor and Phyno, for the peaceful nature of the protest expressed the solidarity of the government and people of the state to their cause.

He added that the panel is saddled with the responsibility of receiving and investigating complaints of police brutality or related extra judicial killings; evaluate evidence presented/other surrounding circumstances and draw conclusion as to the validity of the complaints and then recommend compensation and other remedial measures where appropriate.

Gov. Ugwuanyi also announced that his administration will establish a human rights public complaints team of between two and three persons to receive complaints on an on-going basis, adding that the team will be established by the special committee on security and human rights.

“We have also resolved that we will set up complaints commission which the public can relate to by telephone or social media channels”, the governor said.

While appreciating Ndi Enugu for the overwhelming support and goodwill especially when they reelected him in 2019 with an unprecedented 95.54 percent of the valid votes cast, which he said was a referendum on his performance, Gov. Ugwuanyi reassured them that his administration will do all that it has promised to do for the people in spite of the nation’s challenges.

The deputy governor, Mrs. Cecilia Ezeilo, who accompanied the governor to the event, had on Tuesday, presented the state government’s position accepting to address all the demands made by the protesting youth also led by Flavour and Phyno.

Enugu State is in the hands of God!

CHUKWUMA SOLUDO: THEY HAVE DECEIVED YOU LIKE THE DID TO OTHERS –  EKPENYONG ISAIAH