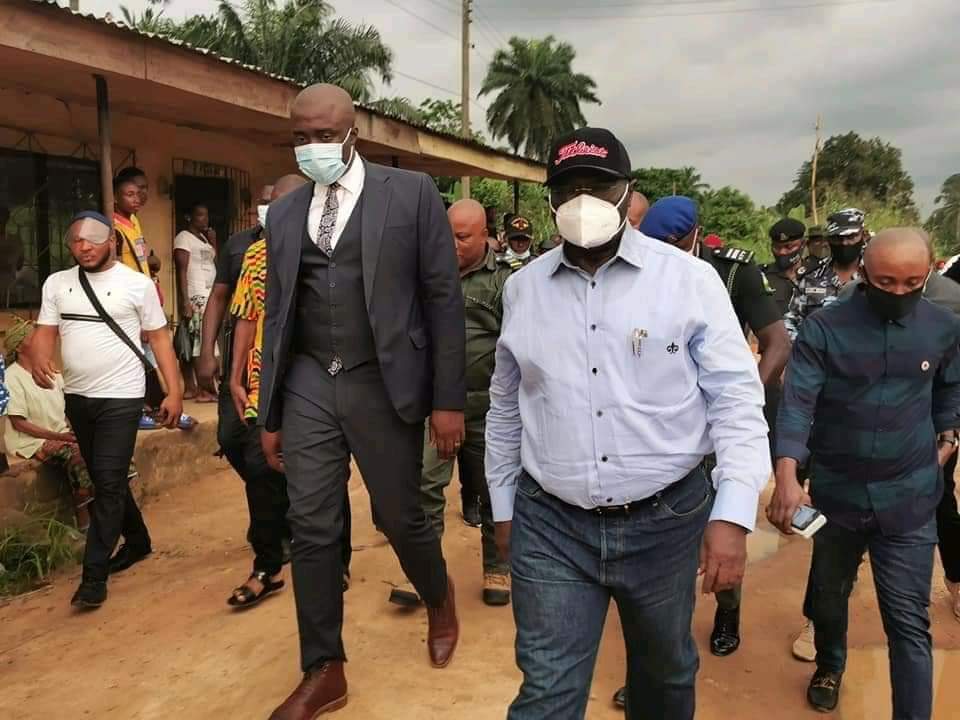 ASSURES THAT JUSTICE WILL BE SERVED

Governor Okezie Ikpeazu this evening, visited Umuokpo Village, Obingwa LGA to commiserate with the family of Late Onyedikachi Nwogu who was allegedly shot dead at close range by an Officer of the Nigeria Security and Civil Defence Corps right in front of his compound three days ago, 8th September 2020.

The Governor who arrived the village along the Aba Ikot Ekpene Highway around 5.30pm, straight from the Owerri airport walked into the compound of the deceased to see his wife, aged mother and children. There was also a mammoth crowd of the people of the Community. It was a very emotional atmosphere as the wife and mother as well as other relatives of the deceased wept and wailed.

Governor Ikpeazu who was met on arrival by the Transition Committee Chairman of Obingwa LGA, Hon. Nnaji Kingsley expressed his deepest condolences to the family of the young man who was killed for no justifiable reason and assured that the killer officer will be made to face the full wrath of the law.

Information available from the members of the Community has it that the Civil Defence Officer, Inspector Robinson Otobong Abel attached to the Akwa Ibom State Command of the Corps was escorting an expartriate and insisted on driving through the compound of the deceased on account of the bad state of the Federal road. The deceased resisted the attempt to drive through his compound, whereupon the officer allegedly shot him at close range, killing him instantly.

The Governor commended the community members for resisting the temptation of lynching the officer.

He assured the wife of the deceased and his aged mother that his administration will not abandon them, especially the little children, whom he assured will be seen through school.

He asked the Obingwa LGA Chairman to bring the widow of the deceased, the mother and his brother to see him tomorrow for further discussions.

On his way out of the compound , the State Commissioner of Police, Mrs Janet Agbede met the Governor and thanked him for the visit, assuring that the killer officer who is in custody will be prosecuted.

FG TO INVEST IN ASSISTIVE TECHNOLOGY