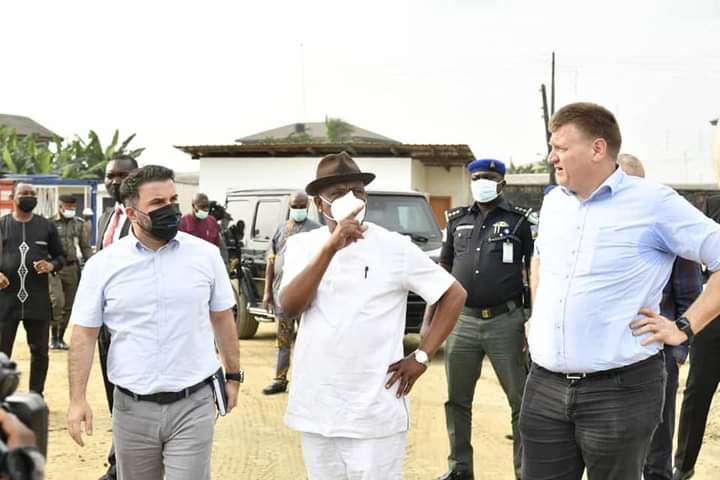 Governor of Rivers State, Nyesom Ezenwo Wike has declared that the money his administration is spending on the Dr. Peter Odili Cancer and Cardiovascular Disease Diagnostic and Treatment Centre in the State is not a misplaced priority.

The governor made the assertion on Thursday when he visited the project site at Rumuokuta in Obio-Akpor Local Government Area, to inspect the progress of work done already.

Governor Wike said that no amount of money spent in putting in place facilities that will secure the health of all residents in the state will be considered a waste.

“I’m very happy that the money we have spent here is not a misplaced priority. The healthcare of our people is important to us.

“It will save the time people travel overseas for cancer treatment. I think it will be something every Nigerians will be happy with. Here will be like a tourist centre. It has helipad, and doctors’ quarters. In case of emergency, they will fly in helicopter to this place and doctors who stay here will attend to them.”

The governor explained that the State government decided to build doctors’ quarters within the precincts of the Cancer and Cardiovascular Disease Diagnostic and Treatment Centre so that no doctor will claim he is unable to attend to patients timely, particularly in emergency situations, because of distance of where he stays to the hospital.

The governor expressed satisfaction with the pace of work done in view of the gigantic nature of the project and the difficult topography that requires massive piling.

“We have confidence in Julius Berger and having come here today, I think they are on schedule. We are happy with the level of work.

“It’s not a job you must rush. They are taking their time to make sure they give the citizens of the state the best and to Nigerians in general.

“You knows it is a specialist hospital, the first of its kind in this country. We are quite comfortable and confident that by end of July 2022, they would have handed over this very important project to the State.”

The Regional Manager of Julius Berger Nigeria PLC, Juergen Fischer, said they are conscious of the promise they have made to the governor to deliver the project as agreed.

Already, he noted, the milestone achieved has surpassed what was initially expected because they have done ground piling and concluded the critical baseline underground structural work done.

“You can be sure that by the end of July as we promised his excellency, we will deliver this hospital. We are a little bit ahead of schedule even in the rainy season.
”