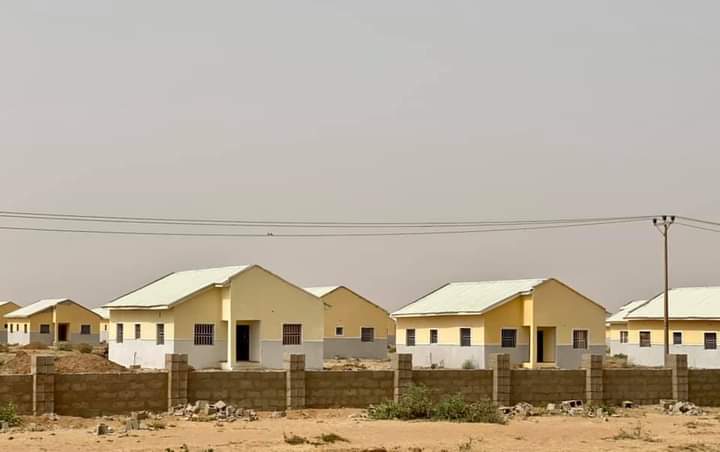 Currently Governor Mai Mala Buni is constructing the first phase of 3,600 housing units across Yobe state. Work is at finishing stages for 1,800 units, or 50 percent of the total, built across the 17 local government areas. The houses are built in two-bedroom and three-bedroom apartments and each three-bedroom unit and occupy 800 square meters of land while each two-bedroom unit was allocated 600 square meter.

While flagging off the project in 2019 Govenor Mai Mala Buni pointed out that; “As we all know, shelter is a basic human need. Everyone needs a roof over their heads, a place they can call home. Along with other important human needs such as clean water and sanitation, healthcare, security, etc, shelter plays an important role in achieving peace and prosperity. This is why the Yobe state government is keen to ensure that on a continuous basis, our people have access to safe and affordable housing,” he said.

It will amount to redundancy to try explaining the importance of shelter to human beings. It is quite obvious that life, for every human being cannot be fulfilled without shelter. In Nigeria housing remains a problem for so long. It is estimated that Nigeria has a deficit of 17 million houses as of August 2012 and requires 700,000 houses annually compared to less than 100,000 currently being constructed, according to National Bureau of Statistics (NBS)

Housing gives children in low-income households the opportunity to improve and succeed academically, maintain their health and well-being, and achieve financial success later in life, while reducing costs to society in the long term. Therefore, it s commonly accepted that the well-being of both individuals and families is substantially affected when the need for satisfactory housing is not met.

It is widely established that; a safe, decent, affordable home is fundamental to a family forging a path out of poverty. Decent and affordable shelter is intricately woven into better opportunities for children and their parents. When the housing problem is addressed, families find better health, more financial freedom, independence, and a stability and security that far too many families simply can’t achieve without a helping hand.

The need for affordable housing is immense, and the lasting impact it can have on homeowners and their families is undeniable.

Prioritizing housing is set to be a permanent feature of the government of Governor Mai Mala Buni. It is also a way of reducing the housing deficit and enhancing the living condition of the people.