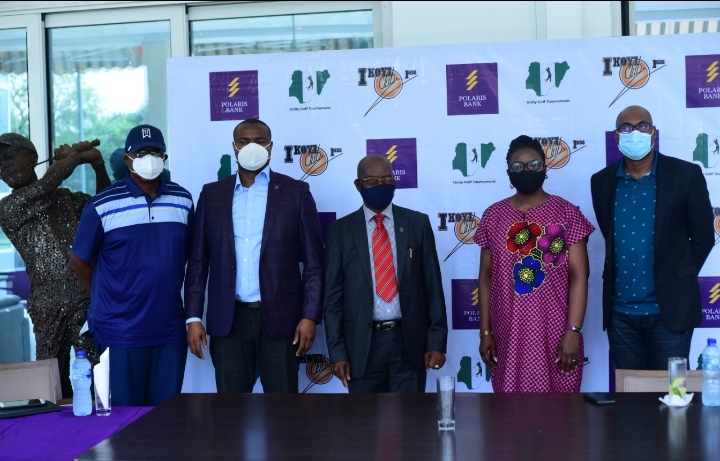 Polaris Bank has announced its sponsorship of the Unity Golf Tournament organised by the Golf Section of the prestigious Ikoyi Club 1938.
The Unity Golf Tournament is an Open Amateur Golf tournament is expected to parade about 350 golfers who are members of registered Golf Clubs across the country. Specifically, five players each will come from about 70 Clubs across the country. Other highlights of the three-day tournament include a cocktail at the Club house on March 25. On the second day, March 26, ladies, veterans, and some guests will take to the field.
The three-day tournament promises to gather the very best golfers around the country in an atmosphere of unity through recreation and sports. The event will receive guests from Thursday, March 25, tee-off on Friday, March 26, and end on Saturday, March 27, with a grand finale which will see hcp 0-14 male and guests play before the presentation of awards to winners at a Gala Night.
Expressing delight on the partnership with Polaris Bank, the newly elected Captain of the Golf Section of Ikoyi Club, Chief (Dr) M.I. Okoro thanked the Bank and expressed optimism that the sponsorship would strengthen the already existing relationship between the Bank and the Ikoyi Club community.

Speaking on the competition, the Acting Managing Director/CEO of Polaris Bank, Mr. Innocent C. Ike, said the Bank is pleased to associate with the Ikoyi Club 1938, adding that sponsorship of the tournament underscores the Bank’s conviction on the role of sports, particularly golf, in enabling national unity, and socio-economic development.

Mr. Ike noted that Ikoyi Club 1938 is an iconic brand that has transcended from being just a club for socialisation to a nursery for raising stars who have gone ahead to get listed in World Amateur Golf Ranking. According to the Polaris Bank CEO, “We are excited to partner with the Golf section and, by extension, the Ikoyi Club 1938 in hosting this tournament. Our position stems from the fact that Ikoyi Club Golf Section is a foremost Golf Association in Nigeria, and hence provides us the platform for bonding, business and social good”.

“As a future-determining Bank and an enabler of enterprise, we are always willing to be part of any social and business partnership that holds opportunities for the larger society,” he added.
Ikoyi Club 1938 Golf Section originally existed as two clubs: European Club and The Lagos Golf Club. A merger saw the birth of the Ikoyi Club 1938. It is an 18-hole golf course where various golf tournaments and championships are played throughout the year, attracting golfers worldwide.

The lush green Golf Course of Ikoyi Club 1938, Lagos. is within the 456 acres of land, providing first-class facilities for about 10,000 members. Several of the A-list open and close golf tournaments/championships hosted at the Club have attracted recognition and endorsement from global Golf bodies like United States Golf Association (USGA), Royal and Ancient (R & A) of Scotland, with some of the ones listed amongst golf tournaments in the World Amateur Golf Ranking (WAGR).
The gala night would have in attendance the Governors of Imo State, Senator Hope Uzodinma, and his Lagos State counterpart and host Governor, Babajide Sanwo-Olu. The Innoson Auto manufacturer/Founder, Chief Innocent Chukwuma will also attend alongside other top dignitaries. Royal Father of the day is the Oniru of Iruland, Lagos, His Royal Majesty, Oba Abdulwasiu Omogbolahan Lawal, Abisogun II

OGUN CARGO AIRPORT: OUR DECISION IS OBJECTIVE AND BASED ON OUR ECONOMIC DEVELOPMENT AGENDA - ABIODUN

THE WONDERS OF AKU CAVE IN NKALAGU-OBUKPA

Errand360HQ:Meet Abanofor Chibuzor Gideon, one of our riders operating from The Victoria Island Hub