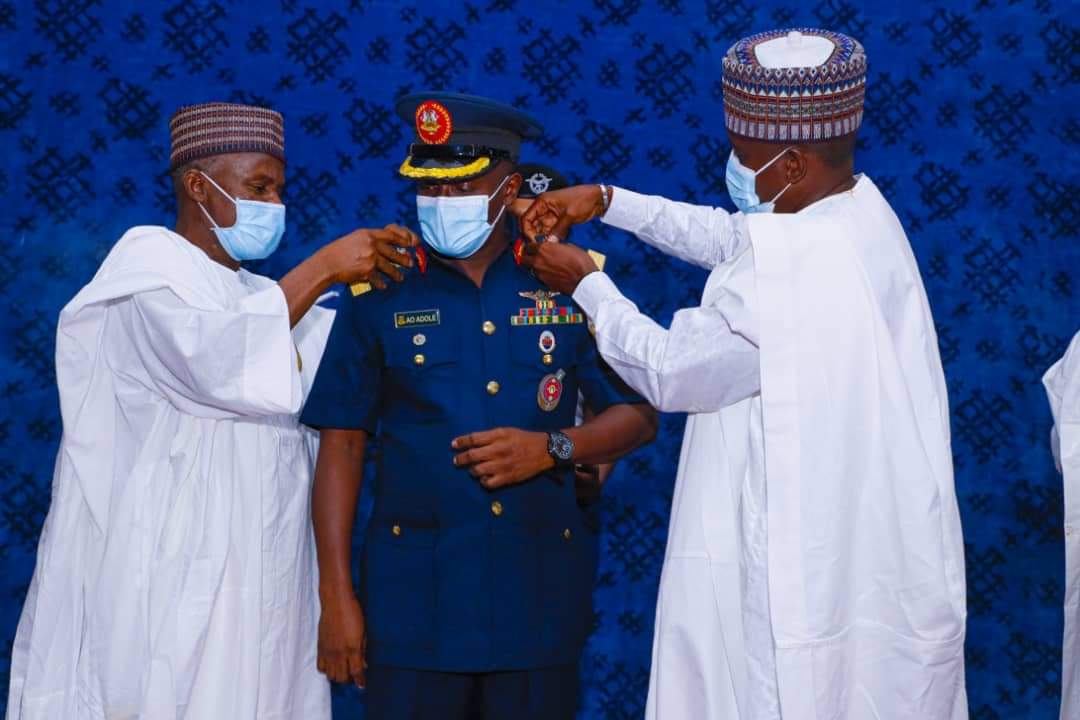 The Nigerian Air Force (NAF) today, 11 December 2020, decorated 16 Air Commodores and 31 Group Captains, who were recently promoted to their next higher ranks of Air Vice Marshal (AVM) and Air Commodore (Air Cdre) by the Air Force Council. The decoration ceremony, which took place at the NAF Officers’ Mess and Suites, Kado, Abuja was witnessed by a limited audience, with attendance strictly by invitation due to restrictions occasioned by COVID-19. While presiding over the ceremony, the Honourable Minister of Defence (HMOD), Major General Bashir Salihi Magashi (rtd), charged the newly promoted and decorated senior officers to rededicate themselves to the service of a better Nigeria as they prepare for higher challenges.

According to the HMOD, “Promotion, especially to air rank, is highly desirable and motivating. It is equally rewarding, albeit very demanding. It is demanding because, as officers of air rank, the Service has offered you all manners and levels of training required to stand on your own and lead from a more holistic or strategic point of view”. Having so equipped them, he said the Service, and indeed the entire Nation, now relies on them to bring to bear all the knowledge, wisdom, ingenuity and critical thinking capacity that they have garnered over the years to foster a greater Nigeria.

Major General Magashi (rtd) further stated that, as the newly-decorated senior officers are aware, not all of those presented for promotion were fortunate to be elevated. He therefore reminded them that, amidst the fanfare and jubilation, they must not lose sight of the ongoing fight against terrorism/banditry and other forms of criminality, as it is their mandate to preserve national security and territorial integrity. “Hence, it is expected that with your upliftment to the ranks of AVM and Air Cdre, you will continue to rededicate yourselves to the service of a better Nigeria”, he said.

Speaking further, the HMOD stated that the Federal Government, under the leadership of the Commander-in-Chief (C-in-C) of the Armed Forces of Nigeria, President Buhari, has remained committed to supporting the Nigerian military. The Federal Government, according to him, is also poised to provide the Services, and indeed other security agencies, with the necessary wherewithal in pursuance of their collective mandate of securing the Nation. He noted that the Armed Forces expects the newly-promoted senior officers to contribute to the evolution of new strategies to contain the challenges facing the Nation in order to ensure safety and security of citizens. “The Government and good people of Nigeria are expecting nothing short of professionalism from you as you discharge your constitutional responsibility”, he remarked.

While congratulating the newly promoted senior officers on their well-deserved promotion, the Chief of the Air Staff (CAS), Air Marshal Sadique Abubakar, in his opening remarks, stated that promotion is a management tool that is used in virtually all organisations, including the military, to enhance productivity by recognizing hardwork, commitment and diligence. He said it equally motivates and inspires others to work harder. He further disclosed that, in the military, promotion is usually a painstaking procedure that involves the selection of the ‘best out of the best’ for elevation. “You have all therefore been found worthy of this advancement. As such, bear in mind that you don’t get promoted only for doing your job really well but also for demonstrating potentials to do more, especially at higher levels. I therefore enjoin you to see your promotion as the beginning of another phase of your career in the Service, with greater responsibilities. Thus, I am particularly elated because this ceremony is indicative that the NAF now has more strategic and analytical minds in our pool of manpower resource to bring to bear their knowledge and experience on how to tackle the security challenges facing the Nation”, he said. While thanking the C-in-C and HMOD for their support to the NAF, the CAS also assured them of the unalloyed loyalty of all personnel of the Service towards meeting the expectations of the Nigerian people.

Earlier in his welcome remarks while presenting the newly promoted senior officers for decoration, the Chief of Administration (COA), AVM Aliyu Pani, noted that every elevation comes with higher and added responsibilities. Accordingly, he said, it is incumbent on all of the celebrants not to betray the confidence reposed in them. He therefore enjoined them all to be more diligent, dedicated to duty, resourceful and selfless in service to the NAF and the Nation, as a whole.

Also present at the event were the Permanent Secretary MOD, Babangida Huseini; Representatives of the Chief of Defence Staff and Service Chiefs; Director Air Force Affairs MOD as well as other senior officers and family members of the newly promoted AVMs and Air Cdres.

We Are Committed to Providing Quality Empowerment Packages for Our Beneficiaries – Col. Milland Dikio (rtd)

IS A PANTAMI,A SQUARE PEG IN A SQUARE HOLE, MOST PROMISING MINISTER