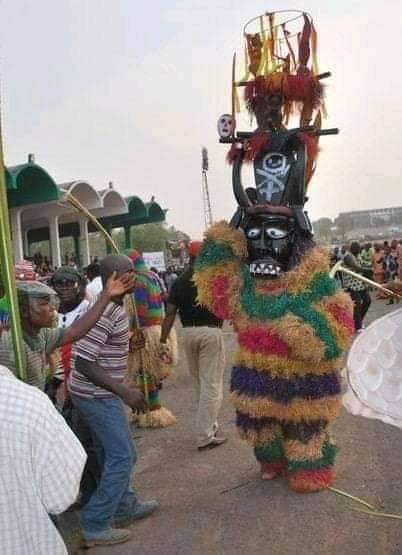 Agaba is a matchet-bearing and fearsome masquerade. It is known for it’s huge and jutting teeth and ugly persona. Agaba is not a masquerade for childish display, It has been rated to be among most powerful spirits in Igbo land because of the powerful charms it possesses.

Agbaja descents who are originally from Ezeagu, Udi, Oji river etc migrated and settled in Idah, when this group of Igbos settled in Idah, Attah Idah was informed that some group of persons have come to settle in his territory. Immediately Attah Idah went to see these new settlers, after welcoming the Igbo settlers, they surmoned the Agaba masquerade to entertain Attah Idah. On the arrival of the masquerade the settlers greeted the Agaba masquerade AGABA EDU meaning the “GREAT MASQURADE FROM THE FOREST”. The word EDU means forest in Nkanu dialect, in those days shrines of some masquerades were located inside the forest. Lest we forget, I said earlier that MMUO AGABA(Agaba masquerade) originated from Nkanu.

Attah Idah borrowed this hailing phrase though today it has been corrupted both in spellimgs and meaning. AGABA EDU is misspelt by Idah people as AGABAIDU which mans in Igala “THE GREAT ONE”.
Till today the Agbaja people who are originally from present day Enugu state are settled in Kogi east and Attah Idah is addressed as AGABAIDU.

JUST LIKE GOOGLE PLUS, GOOGLEPLAY MUSIC YANKED OFF FOR UNKNOWN REASONS

SANWO-OLU VISITS, SYMPATHISES WITH T.B. JOSHUA FAMILY, HIS DEATH WAS NOT A SUPRISE TO ME – WIFE

I NEVER ORDERED MILITARY TO KILL IGBOS IN OYIGBO – WIKE