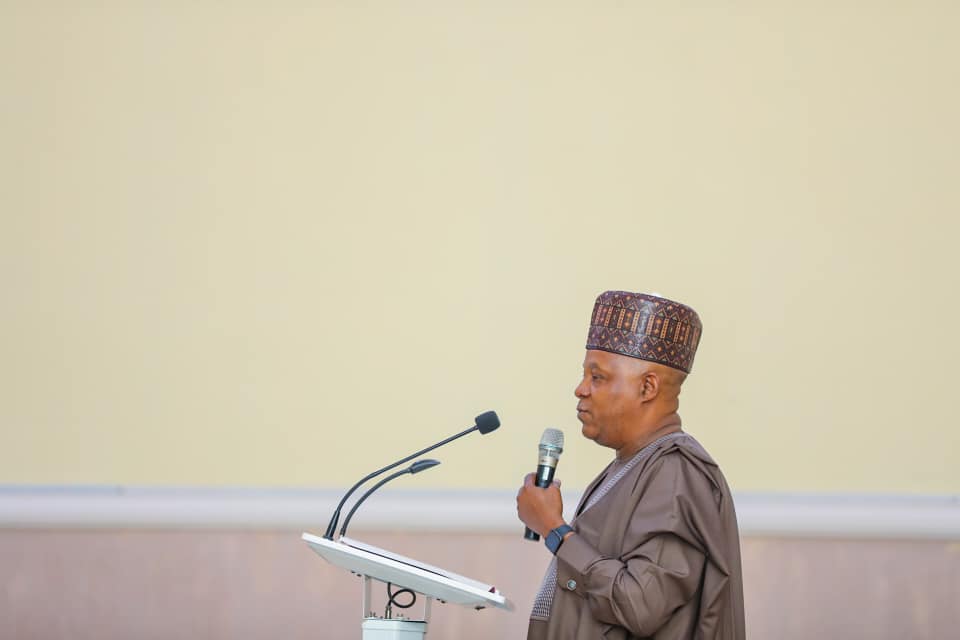 Kebbi State Governor, Senator Abubakar Atiku Bagudu, has urged youths in the country to learn to support the evolution of future leaders.

Bagudu spoke on Sunday, in Birnin Kebbi,at a Public Lecture organized by a Coalition of Youths Groups in the state, to commemorate the 2020 National Youths Day.

The Lecture had as it’s theme,” Youths Development and Mentorship: The Role of Nothern Elites,” and it was delivered by the former Governor of Borno State, Senator Kashim Shattima.

According to Bagudu :” Mentorship involves a lot of risks. its one thing to mentor and succeed, while its another one to mentor and fail.

” The youths must hear this ,as risk taking is an element of mentorship. This is imperative for them to support the process .”

Bagudu further averred that, good leaders must focus on mentoring future leaders that will be better than them and not like them.
The Kebbi Governor also noted that, this was the only way the society could thrive and get better.

He extolled Shattima for sharing his vast experience in mentoring one of Nigeria’s finest leaders, Prof. Babagana Zulum.

” He was however silent on the formidable risks he took in doing so,although he mildly alluded to that,” Bagudu, added.

Presenting a paper at the event, on Youth Development and Mentorship, the Role of Northern Elites, Distingushed Senator Kasim Shettima, urged Nigerian youth to embrace education, for brighter future, to build a solid, united and prosperous Nigeria.

The former Governor of Borno State, while commending Kebbi youths for their hard work and maturity, emphatically charged them to embrace education as a key to future development.

He stressed the need for the youth to be committed in the pursuit of education, to comfortably drive the country to the promise land.
Shettima advocated for a grassroots socio-economic empowerment to propel national growth and development of the entire country.

Specifically on mentorship, Shettima observed that, there was nothing more dangerous than to entrust power to intellectually incompetent persons.
The former governor advised leaders to realise that leadership was a trust from God Almighty, adding that, it should be seen as a temporal session that one must account for in the hereafter.

He explained that he crossed a number of hurdles to eventually arrive at choosing his successor, Prof. Babagana Umara Zulum, whom he described as a trustworthy politician.
Shettima said the choice of Zulum was not for personal reasons, but in the best interest of the state, confessing that, Zulum was better than him in all ramifications .

“As leaders, we must put a sense of mentorship, train the youth to the best of our ability, bearing in mind that we cannot live forever,” he advised.

He also lamented that majority of Youths lacked education or skills for entrepreneurship.

However,Senator Kashim Shetima was emphatic that, late Ahmadu Bello Sardauna and Premier of Northern Region, as well as late Sir Kashim Ibrahim , former Governor General of the North, provided the platform, through mentorship, for young northerners to excel in the Civil Service and other fields of endeavor.

The Senator reminded the audience that, the legacy of educational excellence entrenched by the renowned Islamic Scholar , Sheikh Abdullahi Ibn Fodio, served as catalyst to the development of youths and societal progress..

He commended President Muhammdu Buhari for declaring 1st of November, annually for the celebration of National Youth Day, as well as various programs, with financial packages, to promote youths development.

In his goodwill message, Senator Dr. Yahaya Abdullahi, Senate Leader, expressed profound gratitude to the League of Kebbi Progressive Groups for organizing the lecture.
‘ Your desire to unite , mobilize and sensitize the youths for the attainment of political and economic advancement of our state is worthy of commendation ‘ , he said.

Earlier, the former Head of Service, Kebbi State, Alhaji Udu Idris, had described Distingushed Senator Kashim Shetima , the former Governor of Borno State, as one of the most respected leaders and politicians in Nigeria.

He stressed the need for the youths to be mentored , as they will in the near future, replace the crop of present leaders of the country.

The Commissioner, Ministry for Youth and Sports Development, Alhaji Aliyu Gidado Kaliel, in his closing remarks, reiterated the commitment of his Ministry to support all youth organizations in the state that have clear sense of direction, towards complimenting government efforts to providing succour to the citizenry.

Kaliel opined also that, the state government under the able leadership of Senator Abubakar Atiku Bagudu has directed his Ministry to create an enabling environment for youths in the state.

This is to harness their potentials , sensitize and mobilise them to take advantage of the various state and federal government interventions and opportunities, through skills acquisition, empowerment, entrepreneurship and financial grants to begin and promote SMEs .

OUR MUSHROOM PRODUCTS IS IN LINE WITH GLOBAL BEST PRACTICES – CHIOMA