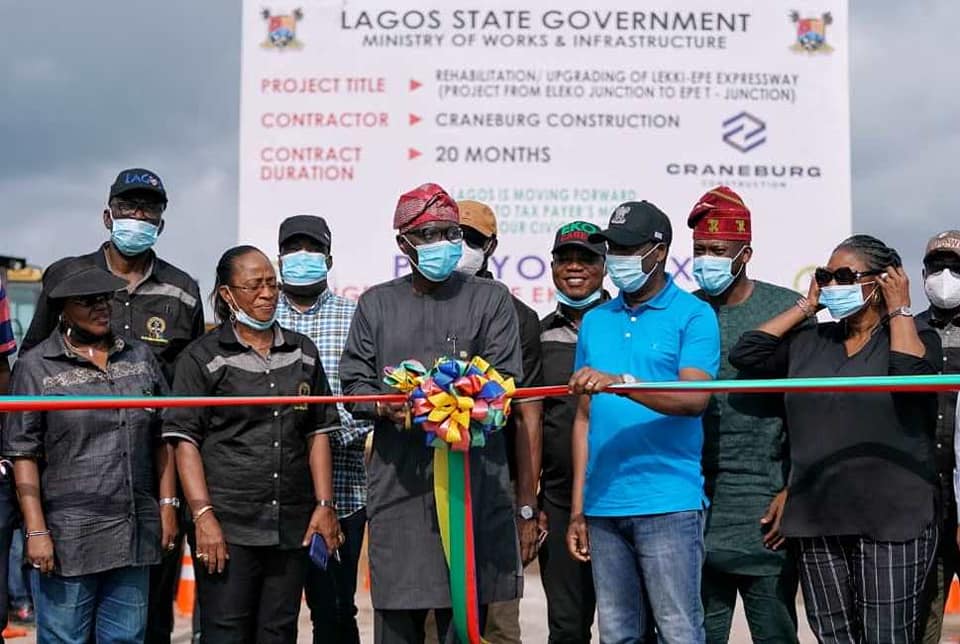 Phase II of project to start next year, says GovernorLagos State Governor, Mr. Babajide Sanwo-Olu, rolled out a major infrastructural overhaul in the Epe Division of the State, flagging off the reconstruction of Eti Osa-Lekki-Epe Expressway 40 years after.

The Governor flagged off the first phase of the road project on Sunday at a ceremony held at the Pan African University in Eleko, Ibeju Lekki area. The first phase, which will be completed in 20 months, will cover 18.75 kilometres, stretching from Eleko to T-Junction in Epe.The residents, who heaved a sigh of relief, thronged the ceremony where Sanwo-Olu formally kick started the project.

The road was constructed in 1981 as a single carriageway, but underwent an upgrade to a two-lane carriageway in 2006. Its condition, however, became deplorable as a result of population growth and increased vehicular traffic.Sanwo-Olu’s intervention would see the entire stretch from Eleko to Epe dualised on rigid pavement, with three lanes on each side. A lane on each side will be dedicated as toll weighbridges only for heavy-duty vehicles.

The Governor, while declaring the project open, said the ceremony symbolised his administration’s revolutionary efforts at making life better for Lagos citizens and improving the ease of doing business in the State.He said the Eti Osa-Lekki-Epe corridor was strategically important to the State’s economic prosperity, stressing that the completion of the project would further strengthen his administration’s commitment to inclusive development.

The Governor vowed that no part of Lagos would be left behind in his Government’s quest for transformational projects.

He said: “We recognise the importance of the Eti-Osa-Lekki-Epe Expressway Road to the economic prosperity of Lagos and its citizens. We are aware of the agitation and concerns of people about this strategic infrastructure. This is why we initially declared a state of emergency on the road and put in place temporary measures last year November.

“Today, I am delighted to be at the historic flag-off of the rehabilitation and upgrading of this 40-year-old Eti Osa-Lekki-Epe Expressway. This effort will culminate in a three-lane dual carriageway reinforced concrete pavement road with a dedicated lane in each direction for trucks and a rigid pavement to accommodate the envisaged axle loadings expected to ply the road when it is completed.

“When completed, this road will complement the new network of roads in Epe and ease transportation of goods and services through Epe to other neighboring states. This will, in turn, lead to improved socio-economic activities in the Eti Osa-Lekki-Epe Corridor.”

Sanwo-Olu said the contract for the second phase of the project, which will cover 26.7 kilometres from Abraham Adesanya Roundabout to Eleko Junction, will be awarded before the completion of the first phase.The project, he said, sent a “strong signal” about his administration’s desire to overhaul our state’s entire infrastructure, especially those that have exceeded their design lifespan.In the coming weeks, the Governor said more infrastructure projects would be unveiled, pointing out that he remained resolute to restoring the State to the path of economic growth despite the negative impact of the Coronavirus (COVID-19) pandemic on Lagos’ economic fortunes.

He said: “In line with our resolve, we will continue to initiate and execute people-oriented projects that fulfill the need and aspirations of the average Lagosian.

With our shared vision and resources at our disposal, it is time to redouble our efforts while looking towards the future with confidence as we rebuild Lagos together.“We stand to accomplish more when we have a common ground and purpose.

I urge all residents to sustain their unwavering faith in our administration as we partner to honor our State’s legacy of excellence, courage, and great resilience.”Sanwo-Olu urged residents of the area to take ownership of the project and support the contractor for timely completion. He also urged the youths in the area to take advantage of the construction work to improve their skills.

Special Adviser to the Governor on Works and Infrastructure, Engr. Aramide Adeyoye, said the ceremony indicated another effort being made by the Sanwo-Olu administration in improving residents’ standard, noting the investment in infrastructure would support business and promote economic development.

She said: “Residents and road users along this axis have clamoured for a solution to the suffocating nature of the perennial traffic gridlock along the Lekki-Epe Expressway especially at the Ajah Junction. This Project will help to resolve the gridlock at Ajah/Ado-Badore Roundabout and environs while ensuring the Lagos bound traffic is effectively channeled.”

FG Flags Off Capacity Building for Police on Emotional Intelligence