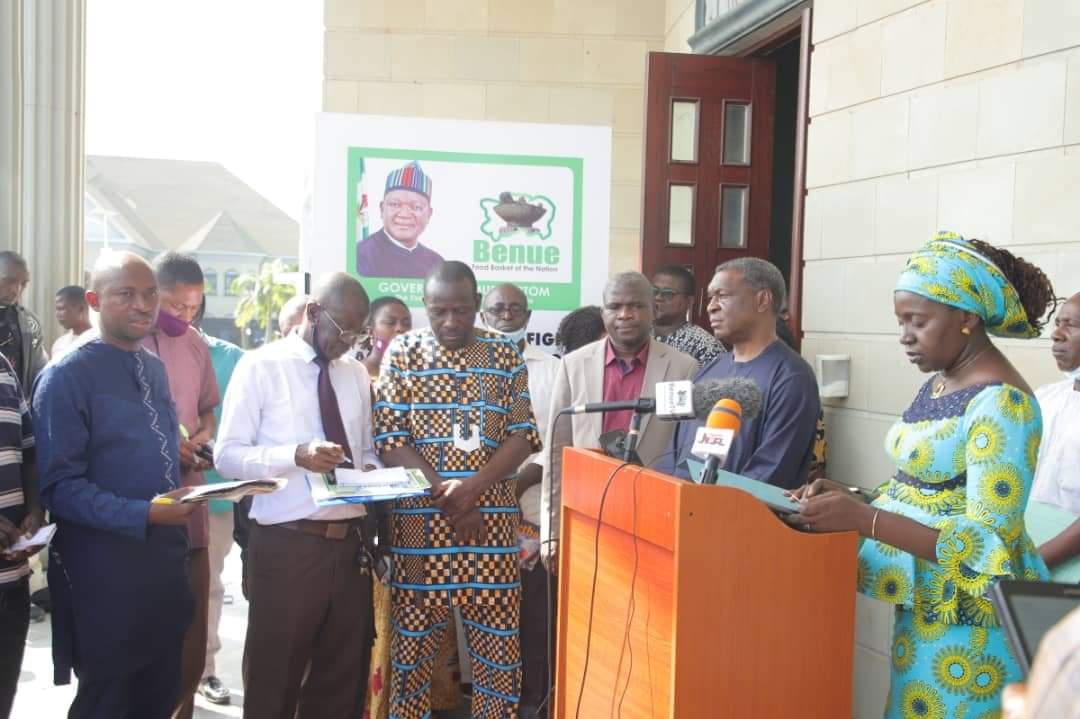 Benue State Government is to collaborate with the Federal Government to build 500 units of two and three bedroom flats in the State.

She stated that the Ortom administration has taken the issue of housing very seriously as it would ease the problem of accommodation for many families.

Mrs. Addingi noted that EXCO had also approved over N109 million contract for the installation of traffic lights at six locations in Makurdi, the state capital.

She stated that the traffic lights some of which had already been installed are to be located at Tito Junction, University of Agriculture junction, David Mark bye pass junction, Balcony Junction, Katsina- Ala street junction and B Division junction.

The information Commissioner said EXCO also approved 30th October 2020 for the auctioning of unclaimed cattle impounded by the Livestock Guards for violating the Open Grazing Prohibition and Ranches Establishment Law of the State.

Secretary to the State Government, Professor Anthony Ijohor while reacting to allegations on the diversion of palliatives from Oju Local Government Area said Police had been drafted into the investigation and a report would be ready next week, adding that anyone found culpable would be sanctioned.

ROBAN STORES ANAMBRA: ARE THEY LOOSING IT DUE TO POOR PAYMENT SYSTEM?

Electronic payment and Digital transactions are the hallmark of a solid economy. it helps in transactions and reduces the risk of carrying cash around . Many small businesses in the country are using one form of electronic banking technology to facilitate their business and bring ease of doing business for their customers but as it stands now,ROBAN STORES, a departmental mall in Anambra seems to be having difficulty coming to terms with the basic concept of electronic payment technology .

Many of the customers of the store have shown their displeasure and anger in doing business with ROBAN stores and have decided to go to SHOPRITE for ease of lament. Speaking on this development , Okeh Onyekachi Chukwuemeka said in his Facebook page that “At ROBAN NNEWI, they no longer do online transactions or POS payments in their shopping malls lately rather you have to step just outside the shopping…

In the world of entrepreneurship, some dream and hope their ideas become reality whilst others seize any available opportunity to make their dreams come true. In the end, what these people want is to have something they can proudly call “MyOwnBusiness”.

Laurent Georges is one such example. While in his final year of secondary school in Cameroon, Laurent faced serious financial challenges. Exploring ways to find solution, his sister told him about a youth entrepreneurship program she had heard of in Cameroon. Seeing himself as a future entrepreneur, Laurent without a doubt took his sister’s advice and joined Nestlé’s My Own Business (MYOWBU) program. “From a pushcart operator to owning my own operator site, the MYOWBU program has considerably changed and blessed my life. From 2015, I have been able to completely pay all my school fees till now where I’m in research cycle in university. I have become a real…

The Nigerian Communications Commission, NCC, is seeking the nation’s judiciary to be part of Information Communications Technology trends whose impact has now affected ways that justice is delivered across the world.

The leadership of the Commission made the call during a workshop organized for Nigerian judges which started in Lagos on Tuesday with the theme: “The digital world and the future of adjudication,” with judges from the federal and state high courts, and appeal courts in attendance.

Speaking at the 18th annual capacity-building workshop, the Chairman, NCC Board of Commissioners, Prof. Adeolu Akande urged the legal luminaries to make greater contributions towards Information and Communication Technology (ICT) development in Nigeria.

While stating the centrality of a functional adjudicatory system as a bedrock for any civilised society, Akande said there was the need to constantly equip judicial officers with the requisite skills for effectual adjudication, especially in the digitized world, where the rate…

The Minister of State, made this statement at
the SON 50th Anniversary celebration in Abuja
on Monday. She noted that 50 years was a long
time in the life of an organisation in Nigeria
especially given the fact that the country’s
existence as an independent country was only
12 years longer.

“SON must therefore be one of the oldest
government institutions in Nigeria. This
anniversary is undoubtedly a milestone worth
celebrating. In addition, the steady growth of the
Organisation from its humble beginnings to
becoming the Apex Standards Body in Nigeria,
with constitutional responsibilities, is also
remarkable and worth celebrating”, she said.

While congratulating the organisation,
Ambassdor Katagum said “in
acknowledgement of its consistent
implementation of reforms aimed at making its
services more easily accessible to…

Lots of Nigerians are wrapping up the year with expectations and they will be ushering the New Year with lots of fanfare and hope. In line with this festive mood irrespective of the economic downturn, a serial businessman, a man that has been able to add value in the lives of Nigerians, Paul Kayode Jaosh will be bringing life changing events to Nigeria to assist them have a wholesome life this 2023. The two events known as “My Double Double” a motivation event designed to lift Nigerians from the way they think and see thing, then there will be another career changing event known as Pure Health Agency Event, where Nigerians that wish to work in the British health industry will be assisted to emigrate.

Occupational mobility has always been human want and need. The need to search for a better place and environment for individuals and families have been…

Value-added services will define the future of e-commerce

The South African retail space has seen some dramatic changes in a relatively short time. Online shopping has become the new normal bringing with it new payment opportunities and some key challenges yet to be overcome.

In this fast-changing landscape it is important for merchants to find their preferred e-commerce partner of choice who will help make a smooth transition to online shopping and contactless payment solutions, says Andrew Springate, CEO of tech and financial gateway service provider PAYM8. “As a PAN African merchant-facing payments gateway PAYM8 has remained a step ahead in transaction interoperability, machine learning and business-driven processes offering a variety of payment products and solutions.”

According to data from FNB Merchant Services e-commerce accounted for 14% of total card payments sales at the end of 2021. The e-commerce market is set to be more than R400 billion by 2025 with around 1 billion transactions per annum.

Protect and secure your data dynamically

SLVA CyberSecurity and Active Cypher’s data protection and control solution works across all systems, protecting data at rest, in motion and during collaboration.

Understanding the importance of simplifying data protection, SLVA CyberSecurity has partnered with Active Cypher, to help its customers overcome these specific challenges.

This is achieved by providing data security across the entire data supply chain, explains SLVA CyberSecurity CEO Patrick Evans. In this way, he adds, one can render sensitive data worthless to ransomware attackers, and turn potential data breaches from catastrophes into inconveniences.

“Active Cypher is a data protection and control solution designed to protect and secure data across its entire lifecycle, in ways that are less complex and costly than its contemporaries. Essentially, it redefines data loss prevention, by ensuring that data is self-protected at all times, even when firewalls and other security measures fail,” he says.

“This is done through the provision of comprehensive encryption, complete access…

NIGERIAN STUDENTS TO ENJOY THE UNIVERSITY OF OTTAWA UNDERGRADUATE SCHOLARSHIPS FOR STUDENTS WORTH UP TO $100,000

The need to get an education and international exposure has always been on the minds of many Nigerian youths. There have been calls for oversea institutions especially in North America to deepen their scholarship program for international students. In line with this reality, The University of Ottawa, a top-notch university in Canada recently made it known that they opening opportunities for Nigerians to utilize their scholarship worth up to $100,000 for African students.

The University of Ottawa made known that the new four-year entrance and excellence scholarship is worth up to $100,000 for African students newly admitted to English undergraduate programs in engineering, science, or social sciences.

They said that “This renewable scholarship is offered to citizens of African countries who are newly admitted to one of the eligible undergraduate programs offered in English by the faculties of Engineering, Science, or Social Sciences.”