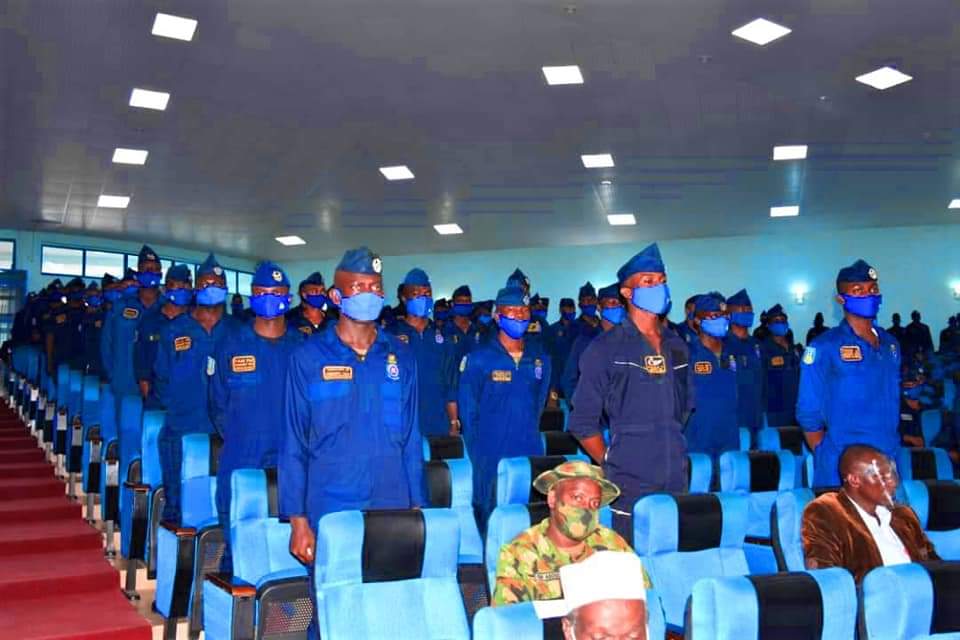 The Chief of the Air Staff (CAS), Air Marshal Sadique Abubakar, has restated the commitment of the current Nigerian Air Force (NAF) Administration to human capacity development for enhanced professional performance. This, he said, was to ensure that NAF personnel possess the requisite knowledge and skill sets to effectively support NAF operations. The CAS made this known today, 21 September 2020, at the graduation ceremony of 435 personnel of Initial Officers’ and Basic Airmen/Airwomen Sundry Military Courses, comprising 75 officers and 360 airmen/airwomen, at the Air Force Institute of Technology (AFIT), Kaduna. Today’s occasion also featured the commissioning of 2 blocks of female hostels constructed by the NAF Investment Limited (NAFIL) for students of AFIT.

Speaking further, Air Marshal Abubakar noted that for over 40 years AFIT had consistently trained officers and airmen/airwomen who are performing creditably in supporting NAF operations as specialists in aircraft and armament engineering, works and services, supply management as well as Information and Communication Technology. The CAS expressed his satisfaction that AFIT was able to successfully complete the training of 760 personnel during the year, including the 435 graduating students, despite the COVID-19 Pandemic. He added that the technical and logistics management courses conducted by AFIT have helped tremendously to reduce dependence on expatriates and thus save foreign exchange for the Nation. “The execution of air operations in theatres across Nigeria, using solely Nigerian crews, engineers, technicians and controllers, is a testament of the success story of our capacity building initiatives,” the CAS said.

The CAS further noted that in the area of pilots’ training, 2 officers, including the first female fighter pilot, were about to conclude their tactical training on the Alpha Jet aircraft, while 29 officers of Student Pilots’ Course 46 (SP 46) recently completed their ab-initio pilot training. Air Marshal Abubakar equally disclosed that, on 18 September 2020, 24 Special Forces (SF) personnel qualified as rappelling instructors, while another 219 Regiment personnel commenced training at the Regiment Training Centre Annex in Bauchi to become NAF SF personnel. He observed that the courses would undoubtedly have positive impact on the NAF’s operations, thus further positioning the Service into a highly professional and disciplined force.

While congratulating the graduands for their steadfastness, tenacity of purpose and grit to complete their course work, Air Marshal Abubakar reminded them that the initial and basic courses were just the beginning of their journey as professionals in the NAF. According to him, tough as the training might have been, it was to ensure that they all had the necessary skills to function effectively in their areas of specialization. He charged them to be good and worthy ambassadors of AFIT as they join a long line of outstanding graduates of the prestigious citadel of learning who, through excellence and commitment, have contributed to the success of the NAF.

The CAS expressed his sincere and heartfelt appreciation to the Commander-in-Chief of the Armed Forces, President Muhammadu Buhari, for his continuous support to the NAF. He said the invaluable support the NAF had enjoyed over the years has placed the Service in a position to tackle the challenges of insurgency and other forms of insecurity across the Nation. While commending the Commandant, Air Vice Marshal Abdulganiyu Olabisi, as well as the instructors, the CAS enjoined them not to rest on their oars as they seek ways and means to further improve on their already sterling performance. He assured them of the NAF’s commitment to continually upgrade facilities and support training efforts in AFIT within the limits of available resources.

In his welcome address, the Commandant AFIT, while appreciating the relentless support of Headquarters NAF, stated that the basic courses were aimed at introducing the officers and men to their various trades in preparation for deployment to the field. According to him, the skills acquired at the training would enable them carry out their responsibilities at the basic level while they ready themselves for more specialized functions as they progress in their careers. The initial training in aircraft maintenance, he said, serves as their first engagement which would inculcate safety practices and quality assurance procedures in line with international standards and best practices. The Commandant stated further that the Logistics and Procurement courses exposed the students to warehouse management, storage, transport procedures as well as the procurement process. “In achieving the training objectives, resources both human and financial, were judiciously applied to ensure adequate coverage of theoretical and practical aspects of the various courses”, he noted.

The Managing Director (MD) NAFIL, Air Commodore Uchechi Nwagwu, while making his remarks during the commissioning of the female students’ hostels, stated that the Company embarked on the project in response to the accommodation challenge faced by AFIT. He noted that NAFIL had earlier built an Arena comprising a cafeteria, students’ common room and 31 shops located within the male students’ hostel of the Institute. “The hostels have been built to meet highly acceptable standards of a tertiary students’ hostel as the rooms are not only all ensuite, but equally fitted with individual kitchenettes for added convenience of their occupants”. The MD disclosed that due to judicious management of approved funds to construct the hostels, some savings were made, which were used to procure beds and mattresses for all the anticipated occupants, thereby adding additional value to the project. He added that NAFIL had also extended its easy-ride services to AFIT with the provision of 4 six-seater passenger tricycles to convey students from the hostels to other facilities around the Institute.

Highlights of the colourful graduation ceremony, which had the Chairman House Committee on Ports and Harbours, Honourable Garba Mohammed, as well as other dignitaries and senior military officers in attendance, included the presentation of certificates to the graduating students as well as presentation of awards to those who distinguished themselves during the various courses. Among the award winners were Flying Officer Godwin Oluyomi and Aircraftwoman Deborah Umoru who emerged as the Best-All-Round Officer and Airwoman with CGPAs of 4.89 and 4.75 respectively. The event also featured an exhibition of some of the Research and Development projects executed by the graduating students.

TECNO Never Disappoints As They Unveil The Latest CAMON 16