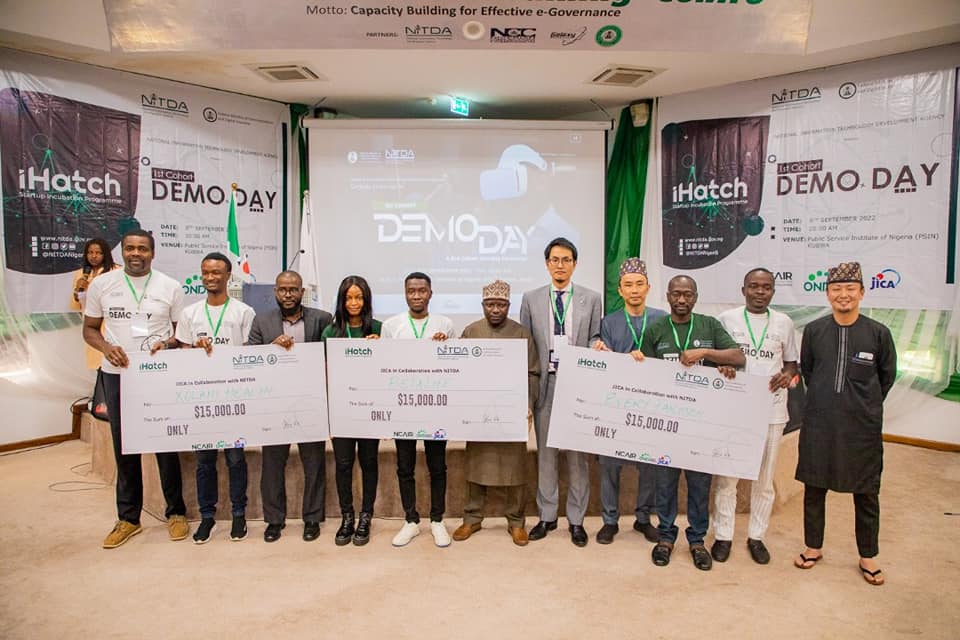 As part of efforts toward sustaining the promotion and growth of digital innovation and entrepreneurship derived from the seven (7) pillars of its Strategic Roadmap and Action Plan (SRAP) 2021-2024, the National Information Technology Development Agency (NITDA) through Office for Nigerian Digital Innovation (ONDI), a subsidiary of the Agency, in partnership with Japan International Corporation Agency (JICA) held Idea Hatch (iHatch) 1st Cohort Demo Day with a commitment to work with relevant stakeholders and partners in implementing programmes and initiatives that will accelerate innovation and provide the much-needed jobs for Nigerian youths.
The Director-General of NITDA, Kashifu Inuwa CCIE, represented by National Director of the National Centre for Artificial intelligence and Robotics (NCAIR), Engr. Ya’u Garba, lauded the Startup Incubation Programme which he described as a vibrant demonstration of the importance of collaboration for the promotion of innovation and entrepreneurship in Nigeria’s digital economy.
He said, “The partnership with JICA in the implementation of the iHatch programme is part of our initiatives to strengthen the tech and innovation ecosystem for the creation of more IDEs that will invariably contribute to creation of jobs for our teeming youth and the prosperity of our country”.
Inuwa expressed hope that the programme would go a long way in nurturing the entrepreneurial spirit of young innovative Nigerians to catalyze the Nigerian digital economy to the next level.
“This is to increase the number of Innovation-Driven Enterprises (IDES) viz a viz sustaining the growth of Nigeria’s digital economy.”, the DG asserted.
Inuwa, who gave a comprehensive overview of the different processes during the incubation period noted that over five thousand (5,000+) entries were received in the countdown to present moment.
“The number was pruned down to 8 startups, comprising a Founder and Co-Founder for each startup, after undergoing two levels of rigorous selection process conducted by a panel of 10 judges, constituted of experts from diverse areas of technology and innovative entrepreneurship.”
“The selection process assessed the startups’ ideas based on the criteria of profitability, scalability, social impact, idea technique, competitive advantage, experience, and a clearly defined future roadmap”, he added.
According to Inuwa, in the course of the programme, the startups benefited from free virtual and physical interactive lectures with experienced mentors, free workspace, mentorship meetings with tech professionals, pitch deck enhancement, and networking opportunities, and four startups that were initially not legally registered, successfully registered with the Corporate Affairs Commission (CAC) while work is in progress on the prototyping and Intellectual Property (IP) registration of their business ideas.
Inuwa maintained that the Demo Day also marks the inauguration of the Second Cohort of the iHatch Incubation Programme.
While appreciating the Honourable Minister of Communications and Digital Economy, Professor Isa Ali Ibrahim (Pantami), for facilitating the partnership between the Japanese and Nigerian governments and for making the iHatch programme a reality, Inuwa also appreciated the Japanese Government, through the Japan International Cooperation Agency (JICA), for keeping faith in the highly impactful partnership. 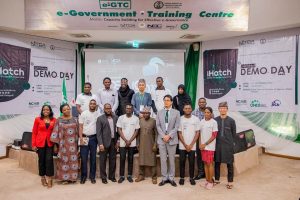 “Flowing from this partnership, NITDA and JICA conceptualised and designed the iHatch, a 5-month free intensive incubation programme executed by the ONDI and hosted within the National Centre for Artificial Intelligence and Robotics (NCAIR).”
“Essentially, the programme is designed to help Nigerian entrepreneurs refine their business ideas through a series of coaching, lectures, and bootcamps to generate scalable and adaptable business models in the country”, he noted.
Referencing Statistic where Nigeria is reported to have an estimated 3,300 startups in 2020, which is highest on the African continent; the NITDA Boss stressed that Nigerian startups have continued to attract more investment than other countries on the continent, with a number of the startups raising about USD$600 million in the first quarter (Q1) of 2022.
“The top ten startups that attracted the funding are Flutterwave ($250 million); Moove ($105 million); ThriveAgric ($56.4 million); Reliance Health ($40 million); Bamboo ($15 million); Credpal ($15 million); SeamlessHR ($10 million); DrugStoc ($4.4 million); Casava ($4 million) and Sudo Africa ($3.7 million). These clearly indicates the vast potentials that abound within Nigeria’s tech and innovation ecosystem”, Inuwa averred.
Meanwhile other speakers including the Chief Representative, JICA Nigeria, Susumu Yakzorio and the AG. National Coordinator, ONDI, Yakubu Musa were optimistic that the programme will inspire Nigerians to become active players in the global innovation-driven market.
Highpoints of the event witnessed eight innovators including e-dokta, SolutionMed, Authentic QRTech, EveryFarmer, XTID Network, Afrinet Powertech, Beta life, and Xolani Health who took turns to pitch their solutions with Xolani Health, Evlvery Farmer and Betalife clinching the first, second and third positions respectively.
The winers were awarded the sum of $15,000 each, courtesy of JiCA.
The Demo Day also signaled the end of the first cohort and inauguration of the Second Cohort of the iHatch Startup Incubation Programme; with the key players hoping that the third cohort would be extended across the six geopolitical zones in Nigeria.
Tags: Abuja,demo,Nitda,startups
Preview post

Invitation to the NCC’s IoT Code Camp and Hackathon 2021