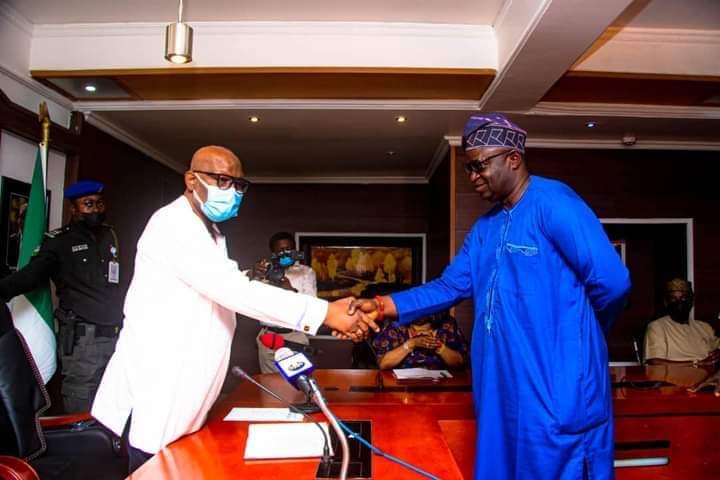 The swearing-in took place on Tuesday at the State Executive Council chamber of the Governor’s office few hours after the appointment was announced.

The event was well attended by the state Commissioner of Police, Oyediran Oyeyemi; and the commandant of the Nigeria Security and Civil Defense Corps (NSCSC), Dr. Hammed Abodunrin; members of the state Executive Council led by the Secretary to the State Government, Princess Oladunni Odu; among others.

Governor Akeredolu disclosed that the appointment was necessitated by the need to keep the state executive council abreast of the security situation in the state.

The Governor said the invasion of Ondo communities and villages by criminals masquerading as herdsmen was part of what informed his decision to have a Special Adviser who had been part of the system.

“When we had this threat over and over, initially, I never knew we would get to this point. That people will have the audacity to come to our villages and communities, killed our people and set their houses ablaze. I knew I needed to do something. Part of my immediate reactions is what you are seeing here today.

“I am a practical person. And I have seen that we are faced with a lot of challenges, particularly, one of the topmost challenges we are facing is security.

“We decided that Exco must now make robust contributions on the issue of insecurity we are facing. I was convinced that the time has come for this state to have a Special Adviser on Security matters,” Governor Akeredolu explained.

He thanked all heads of security agencies in the state for their great efforts at keeping the state safe.

“I want to thank all heads of security agencies in Ondo state. I do receive text messages on daily basis on the great efforts you are making and your exploits. Police, NSCDC, the military and Amotekun, I thank you,” he said.

Arakunrin Akeredolu, while congratulating Chief Adeleye, described his appointment as well-deserved, adding that he has done so much in assisting the state in security matters.

Responding, Chief Adeleye thanked the Governor for finding him worthy of the appointment, saying his commitment to the security of the state was borne out of his passion for a better Ondo State.

He promised to always work with other security agencies in the state and contribute immensely to the efforts at making Ondo state safe.

ESTABLISHING BUSINESS OR GOING TO SCHOOL IN GHANA? HERE IS THE ANSWER!

FMOJ HAS MADE STEADY PROGRESS UNDER MY WATCH – AG SGF