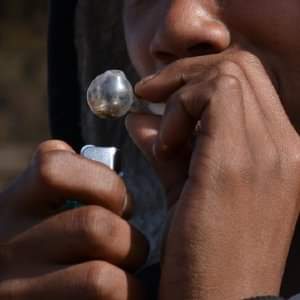 Anyone who lives in the southeast must have heard the word mkpụlụ mmịlị on the streets, thats the the name that has been given to the hard drug methamphetamine popularly called crystal meth.

This is what the young people in the East are into now, there seems to be zero concerns from parents religious leaders and the government on the negative effects of this drug.

“Crystal meth is the common name for crystal methamphetamine, a strong and highly addictive drug that affects the central nervous system. There is no legal use for it.

It comes in clear crystal chunks or shiny blue-white rocks. Also called “ice” or “glass,” it’s a popular party drug. Usually, users smoke crystal meth with a small glass pipe, but they may also swallow it, snort it, or inject it into a vein. People say they have a quick rush of euphoria shortly after using it. But it’s dangerous. It can damages the body and cause severe psychological problems.”

Crystal meth can me cooked or made locally as long as the chemicals needed are available and the fact the law enforcement agencies are not going after the suppliers of this drug, the chemicals are easily accessible and the drugs are quite affordable for young teenagers.

Teenage boys are into different criminal activities just get funds that will enable them get a dose of mkpụlụ mmịlị while the teenage girls are going into prostitution for quick money to sniff this drug.

Mkpụlụ mmịlị has become very popular in the secondary schools and universities in the South-East and some people have overdosed and died while taking this drug.

Nigeria is a major corridor for the transportation of hard drugs to North/South Americ and Asia and we all know the our people are into this trade.

Someone must have introduced this drug to the street of the cities Ala’Igbo and if it’s not curtailed it will spread to other parts of the country and become a Nationwide problem.

Crystal meth is not something to mess with we are looking at a huge population of our young people ending up in rehab and suffering mental/psychological problems if something is not done.

USAID Partners with Imo to Improve WASH State to ‘corporatize’ Water Board for better...