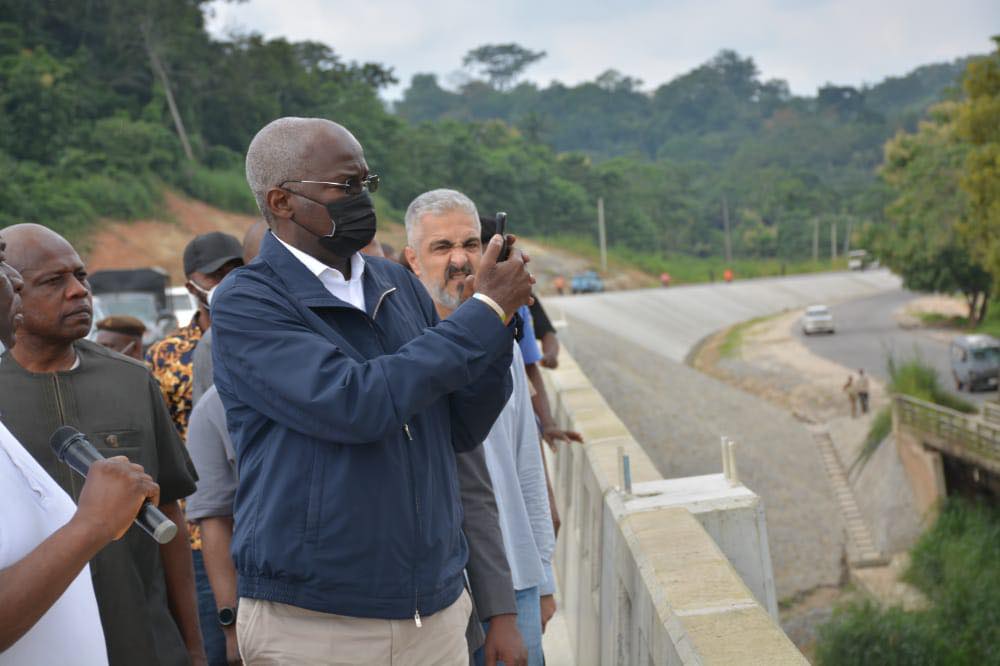 The completed border bridge at Mfum community between Nigeria and Cameroun and the Ikom bridge will facilitate international trade between the two countries when inaugurated.

The Honourable Minister of Works and Housing ,Mr. Babatunde Raji Fashola, SAN made the remark while inspecting the two -lane bridge over the Cross River at the Cameroun and the Nigeria new Border at Ekok /Mfum and the new Ikom Bridge in Cross River State.

“This is the A-4 Axis coming from Calabar to Maiduguri through Ogoja to Katsina-Ala. So you will expect more volume of trade. And it is no accident that Cross River State bears its name. It is actually the River that named the state. That River opens to the sea and the Gulf of Guinea. And so high impact on international trade is expected”, he said.

Fashola also said , “We have had very strong relationship with Cameroun in terms of trade and business and if you go to Aba, Enugu, Abakaliki, for example, this is the route that facilitates trade, agro produce, merchandise, manufactured goods from Aba in Abia State.”
The Minister explained that the President Muhammadu Buhari led administration’s strategy of planning and execution of infrastructure projects was yielding results through successful completion.

“This is a very strategic infrastructure to take Nigeria to the future for many more decades to facilitate relationship between brothers and sisters in Cameroun and Nigeria and to strengthen the bond of relationship in a joint development with the Republic of Cameroun and Nigeria.” Fashola said, adding that ‘’We are now entering the season of completion of infrastructure projects.”

The Minister while speaking with journalists after inspecting both the Nigeria /Cameron Joint Border Bridge at Mfom /Ekot and the New Ikom Bridge at Ikom in Cross River Stated noted that these bridges would increase the prosperity of the people, facilitate hundreds of jobs, movement of agro produce and manufactured goods, joint border patrol that would lead to security efficiency and position both nations to take the benefit of the free trade zone agreement.

Cross River State Governor, Professor Ben Ayade who was represented by the State Commissioner for Works, Engr. Dane Osimasu at the sites of the inspection said the Minister is a conceptualizer , implementor and committed to road development in the state. He assured the Honourable Minister that counterpart funding from the state would always be provided where it is necessary in infrastructure development projects.

The Director Highway Bridges and Design Federal Ministry of Works and Housing, Engr. Emmanuel Adeoye said during the inspection of Ikom bridge, “The project was awarded in October 2018 and it is due to finish by 7th November, 2021.”

The Director said, “The rate at which the contractor is working, by the end of October it should be finished. Right now as we speak, the job is 92% completed, with the time lapse of 68%. We are moving faster than the scheduled time, so by end of October we should be done with the bridge.”

According to him “the Road Lane Marking has also been done.
The Federal Controller of Works in Cross River State, Engr. Bassey Nsentip disclosed that several road projects were progressing without hitches in the State.
The Executive Chairman of Etung Local Government Council Cross River State, Hon. Nkom Etuk praised the Ministry of Works and Housing for the remarkable job done on the bridges.

The Ajassor Community Representative, Hon. Victor Njor said the border bridge has enchanced joint border patrol linking Cameroun and Nigeria within their community and the people shall come out en mass when the bridge will be inaugurated soon.

The border bridge between Nigeria and Cameroun is funded by the African Development Bank while the Ikom bridge is through the Sukuk bond.

THE UNKNOWN GONEMEN OF CHRISTMAS