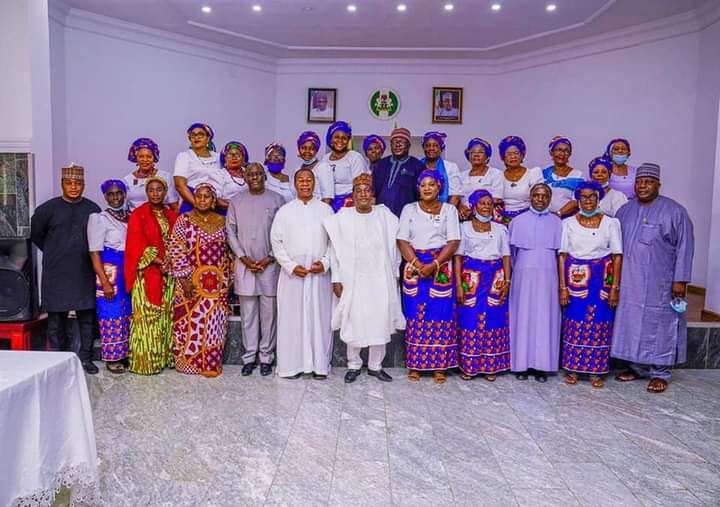 The Catholic Women Organisation of Nigeria (CWON) has commended Governor Simon Bako Lalong for his inclusive leadership style that has promoted peace and greater harmony in the State and nation at large.

CWON Secretary Board of Trustees, Lady Rose Agur stated this when she led the Executive Committee of the body to the Government House Rayfield Jos to pay a courtesy visit to the Governor and present to him the new President of CWON Dame Mary Assipi Gonsun.

She appreciated the Governor for his disposition to reach out to people across religious, denominational and social groups. She appreciated the donation of a bus to the CWON and other forms of support that have facilitated the work of evangelism.

She also told the Governor that the National Executive Committee was in Jos for its Retreat and Executive Meeting.

Responding, Governor Lalong said he was delighted with the honour of the visit by the Catholic Women Organisation which is the umbrella body of women in the Catholic Church.

He urged them to pray for Nigeria and the leadership as well as followership for God to grant them wisdom and ability to resolve the challenges of the nation.

The Governor said the already, the intercession of women particularly the CWON was very useful in encouraging Government serve the people with honesty, vigour and commitment.

Lalong also asked them to pray for the rescue of people in captivity and for the defeat of evil persons that have terrorized the country.

LASBCA DENIES ALLEGATION OF EXTORTION BY BUSINESS OWNERS AT MMIA