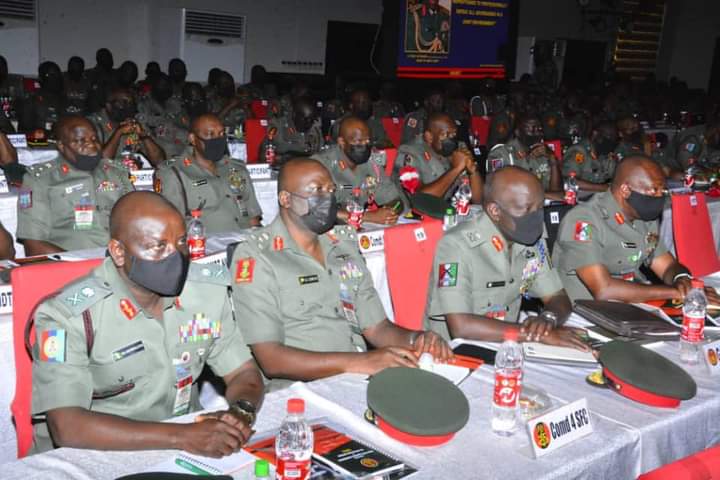 The Chief of Army Staff( COAS), Lieutenant General Ibrahim Attahiru, said his vision will rebuild the Nigerian Army into a formidable force that will defeat all adversaries.

He made this pronouncement during the opening ceremony of the combined COAS First Quarter Conference and Nigerian Army Operations Retreat 2021 held at Army Headquarters Command Officers Mess 1, Abuja.

The COAS said the event which is his maiden conference since his appointment as COAS will offer ample opportunity for participants to brainstorm and interact on the state of affairs of the Nigerian Army with a view to reviewing NA activities for the first quarter and planning for operational commitment in the second quarter of the year.

The COAS added that he took over the mantle of leadership of the NA at a very critical period when the nation is facing daunting security challenges but assured Nigerians that the Nigerian Army under his leadership will continue to decisively deal with all security challenges currently confronting the nation. “I and my colleagues took over command of our respective services at a very critical period due to daunting security challenges. In line with President Muhammadu Buhari’s directives and my intent to rebuild the Nigerian Army into a formidable force , I conceived the vision of having “A Nigerian Army that is Repositioned to Professionally Defeat all Adversaries in a Joint Environment”.

“To breathe life into this vision, I released my Command Philosophy which has Readiness, Capacity, Continuous Leadership Development and duty to control as cardinal pillars”

He promised to build on the dependability of the Nigerian Army to accomplish any mission tasked in line with norms enshrined in our values and ethics. The COAS lauded the initiative of the first ever Nigerian Army Operations Retreat as part of activities for the First Quarter Conference 2021 which according to him will provide a platform to reassess the threat environment and review ongoing operations of the NA with a view to identifying gaps that could be addressed in the planning and conduct of future operations.

Lieutenant General Attahiru further stated that Nigerian Army under his watch will remain resolute in decisively dealing with threats against the Nigerian state. He then charged commanders to key into his command philosophy in order to ensure operational and administrative deficiencies become a thing of the past in all formations and units of the NA. He revealed that President Muhammadu Buhari will provide combat enablers to the NA that would enhance and boost operations.

”As I speak, we will soon be receiving combat enablers that would enhance and boast our operations. Concerted effort is also being made to eliminate the threat of improvised explosives devices which has been a major impediment to troops and operations in Operation LAFIYA DOLE.

I have approved the purchase of spare parts and directed all damaged and serviceable equipment in the theatre to be back-loaded for immediate repairs. I want to assure you that I am determined to rebuild the fighting skills, capacity, confidence and moral of the troops”, he said.

Present at the event are the Chief of Defence Intelligence, Principal Staff Officers from Defence and Army Headquarters, Corps Commanders, General Officers Commanding, very senior officers both serving and retired among others.

Danbatta Condoles with Emirs of Kano, Bichi over Mother’s Demise

‘I WON’T GIVE UP MY BELIEF IN YOUNG PEOPLE,’ SANWO-OLU DECLARES AT PEACE FORUM

Deliver On Targets, Or Get Sanctioned, President Buhari Warns Revenue Generating Agencies As He Signs 2021 Appropriation Bill And 2020 Finance Bill Into Law