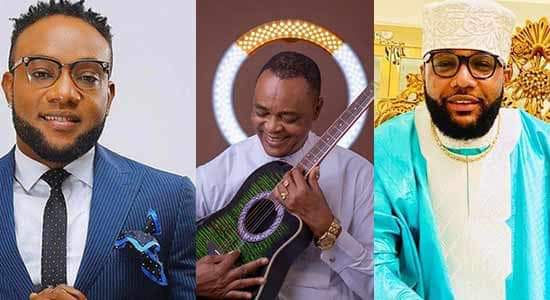 He is seeking “A DECLARATION that the copyright, as well as the ownership rights to the song titled ‘SOM TOO CHUKWU’ which was surreptitiously included in the music album titled “CULTURAL PRAISE VOL.1 by the 3rd Defendant without the Plaintiff’s consent or authorization, is vested in the Plaintiff by Virtue of his composing the said song in the year 2001.

A DECLARATION that the Defendants jointly and severally infringed on the copyright of the Plaintiff by adapting, producing, distributing, marketing, advertising and performing to the general public the song titled “SOM TOO CHUKWU ” without his consent or authorization (either written or oral).

Perpetual Injunction retraining, preventing and or prohibiting the Defendants herein whether acting by themselves, or through their servants, agents, privies, legal representatives, or any other person howsoever described Acting for them and/or at their instance from infringing on the copyright of the plaintiff to the song titled “SOM TOO CHUKWU” by any means, however.

Mr. Jude also wants the court to compel the Defendants to jointly and severally render an account of the profits, income, and benefits generated from the adaptation, production, distribution, sale, advertisement, marketing, and performance of the titled “SOM TOO CHUKWU” from December 2020 till judgment and the sum of N150,000,000 as general damages

In the Statement of Claim with Suit No: FHC/L/CS/304/202 made available to TheNigeriaLawyer, Jude accused the defendants of reproducing, marketing and distributing his work without his permission as the original owner of the work.

He explained that the music was first produced in 2001 with the title “SOM TO CHUKWU”, to celebrate his daughter’s first birth, but he was surprised to discover that his original work has be reproduced, duplicated, sold, marketed, advertised, distributed to the general public and retitled as “CULTURAL PRAISE VOL.1” by the Defendants.

Mr. Nnam who is a Music Director, Yamaha Ambassador, choral conductor, keyboardist, worship songwriter, accused the 3rd Defendant Kingsley (Kcee) of performing the musical work in 2020 at a wedding reception in Nigeria and has continued till January 2021. He also said other artists and copies of the said music have been distributed digitally on various social media platforms without his consent or authorization.

He also avers that in adapting, producing, distributing, marketing the musical work for sale, the Defendants failed to recognize and/or acknowledges his copyright as well as ownership rights to the musical work and that copyright protection under the extant laws of the Federal Republic of Nigeria is automatic upon his creation and composition of the work in the year 2001.

20 Years of Digital Revolution: NCC Rakes in More Awards for its Regulatory Effectiveness