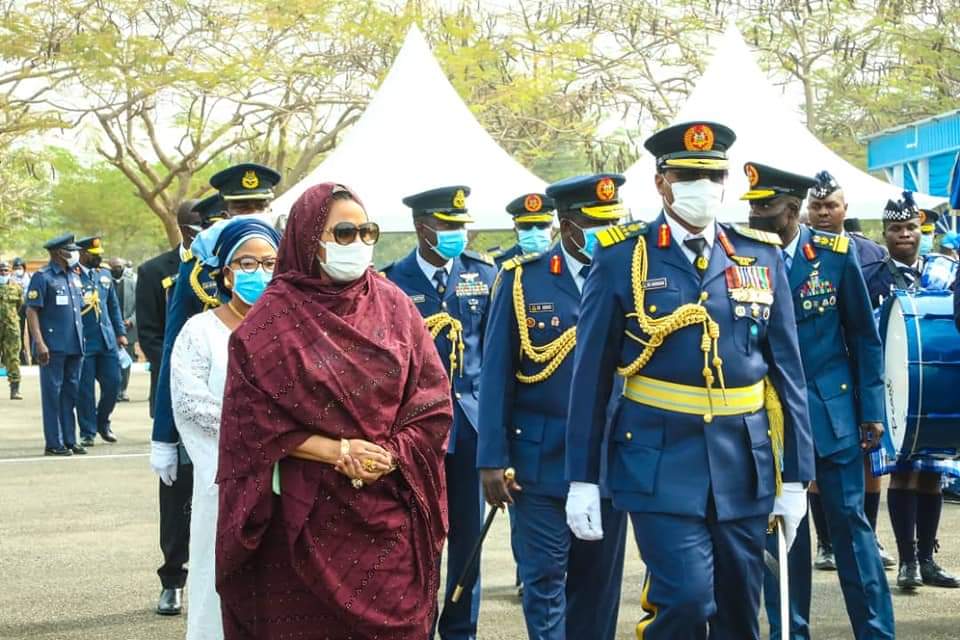 As part of activities to mark the handing over of the mantle of leadership between the 20th Chief of the Air Staff (CAS) of the Nigerian Air Force (NAF) and the 21st CAS, the NAF today, 2 February 2021, held a colourful Fly-Out Parade at the NAF Base in Abuja to honour Air Marshal Sadique Abubarkar (Retired) to mark his final exit from the Service. During the event, the erstwhile CAS urged personnel of the NAF to remain steadfast in the fight to return peace to troubled parts of the country whilst charging them to continue to give their best in service to the Nation.

Speaking further, Air Marshal Abubakar expressed confidence in the abilities of the new CAS, Air Vice Marshal (AVM) Oladayo Amao, to take the NAF to even greater heights. He urged the new CAS to endeavour to sustain the capacity building initiatives that had been emplaced over the last 5 years by his Administration. According to him, “In the last 5 years, we have been able to restructure and reposition the NAF into a highly professional and disciplined force. The NAF flag is today flying high from Agatu to Gembu as well as to Gusau, Katsina, Daura, Owerri, Birnin Gwari, Ipetu-Ijesha, Kerang, Gombe and Bauchi”.

The former CAS added that the current structures would certainly add a lot of value to NAF’s efforts at securing Nigeria and the Nigerian people. He also expressed confidence that, with the imminent arrival of 15 additional aircraft and 8 Unmanned Combat Aerial Vehicles (UCAVs), the Service would be better positioned to be more decisive in addressing the security challenges facing the Nation. Air Marshal Abubakar emphasized that the NAF would be able to employ air power more effectively, efficiently and timely in all theatres of operations across the Country.

While recounting some of his achievements, the former CAS highlighted that the Service through capacity building initiatives has trained and winged 133 pilots, who, he said, constitute 49% of all active NAF pilots that are fighting in different theatres of conflicts to secure the Country. He noted that an additional 21 pilots would be completing their training before the end of the First Quarter of 2021 to join their comrades in the fight to defend the territorial integrity and National sovereignty. Air Marshal Abubakar also disclosed that, while in office, he had successfully executed a programme to bridge the gap between force projection and force protection; since, as he said, the Service cannot effectively project air power if it does not have the means to properly protect its bases, air assets and aircrew.

In the area of Research and Development, Air Marshal Abubakar disclosed that the NAF has entered into partnership with 15 Nigerian universities, that, he said, have continued to contribute significantly to addressing some of the NAF’s aircraft maintenance challenges. He expressed satisfaction on exiting the NAF having substantially achieved his set goals. He therefore thanked the Commander-in-Chief of the Armed Forces, President Muhammadu Buhari, members of the National Assembly, particularly the Senate and House Committees on the Air Force, as well as Officers, Airmen and Airwomen of the Service for their support in ensuring that the NAF got elevated to a much higher level than what he met.

Highlight of the ceremony, which featured the review of the parade by the immediate past CAS as the 2 Guards and the Colour Party marched past in slow and quick time, was the flying-out of the former CAS and his wife, Hajiya Hafsat Sadique Abubakar, onboard a NAF Bell 412 Helicopter.

An ISO’s insider tips to secure your business