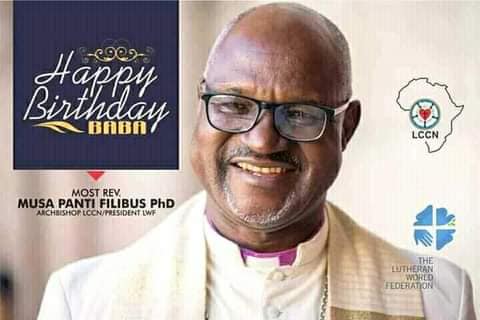 VALENTINE DAY: FESTUS SHOWERS ENCOMIUMS ON VALARIE AS SHE CELEBRATE HER BIRTHDAY

Governor, The Rt.Hon. Ahmadu Umaru Fintiri has congratulated the President of the Lutheran World Federation and Archbishop of the Lutheran Church of Christ in Nigeria, The Most Reverend Dr Musa Panti Filibus on his 61st birthday.

Rejoicing with the foremost Cleric at 61, Governor Fintiri described him as a Priest who has always promoted peace and encouraged inter-faith harmony, urging him to keep up the good work. The ATM Governor praised Archbishop Filibus’ impeccable track record as a Priest and administrator, describing his background as Africa Area Secretary and later Director Mission Development at the Lutheran World Federation Geneva as well deserved.

Governor Ahmadu Umaru Fintiri noted that “Archbishop Filibus brought the graces of holiness, humour and humility to his ministry in the Church, including at the Lutheran World Federation where he serves as President of the fellowship.

The Rt.Hon. Ahmadu Umaru Fintiri also commended the tremendous role the Archbishop is playing towards the growth of the Lutheran Church in Nigeria in particular where he consistently availed of his wisdom and wealth of experience especially during difficult moments.

He said “His broad vision made him comfortable in World of ecumenical and inter-faith relations at the same time that his acute awareness of the people in front of him made him a sensitive pastor and a mentor”.While wishing him well in his new age, the Governor also prayed God to grant him good health and more wisdom as he continues to serve God and humanity.

NIMC:OKOWA HARPS ON THE NEED FOR RELIABLE DATA COLLECTION

Egypt: Exploring the Reefs of the Red Sea