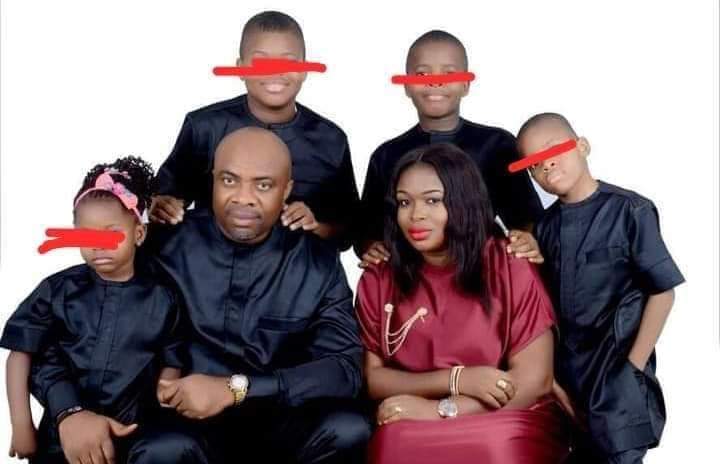 A manager at Sterling Bank, Rumuola Branch, Port Harcourt, Anthony Oko Ikpor, has secretly married a lady he was secretly dating and later impregnated despite being married for 17 years.

It was gathered that the lady Anthony Oko Ikpor impregnated and secretly married is a sister to ex- staff to Sterling bank Easter Igbokwe who the bank relieved her duty as a contract staff in his bank.

Narrating the ugly incident to newsmen in Port Harcourt recently, Mrs Blessing Oko Ikpor, who has been married to Anthony since 2004, said she started life with him when they had nothing, adding that they were living in a boys quarter apartment.

Blessing, a graduate who hails from Owerri West, Imo State, said the marriage is blessed with four children, three boys and one girl. She however said it was when she had her third child that her husband stopped her from working and asked her to concentrate on taking care of their children.

According to her, they were living happily until her husband, Anthony, who hails from Afikpo, Ebonyi State, was promoted to the position of manager in charge of Rumuola branch of Sterling Bank.

Blessing, who said she did traditional, court and white wedding with Anthony, narrated that her husband, after his promotion to the position of manager, started living an opulent and wayward life style abandoning his Christian faith and quitting his position in the Church, this made her wonder where he was getting all the money he was lavishing on his sudden flirtatious lifestyle.

She said she didn’t know he was having an illicit secret affair until he pushed her out of their matrimonial home to pave way for his lover to enter.
“We were together until he was promoted to a bank manager.

Now he feels he has money to play around. He pushed me out of my matrimonial home,” she lamented.

According to her, the lady Anthony impregnated, Tessy Igbokwe, just finished a tailoring skill, hailed from Eluama Amabo, Uzoakoli in Abia State.

On the reason why she stormed the venue of the secret wedding venue between Anthony and Tessy Igbokwe (Bishop Anthony Nnedo Pastoral Conference Center) BANPAC HOTEL Umuahia, Abia State, Mrs Blessing said She did so because she is still legally married to Anthony Ikpo and they are not divorced.

According to his aggrieved wife, Blessing, she said; “I took my daughter to prime Hospital for medical attention before I returned my husband have changed all our house keys getting to the house I found out that he have locked us out of our home without no reason with different padlock, I and my daughter have to look for a place to rest our head, his next actions, he moved our three boys from Port Harcourt school to Ogun State and denied me access to our children by writing to the school which the School has heeded to.

“Anthony Oko Ikpor abandoned our house we built at rumuomoi rumuigbo behind small market, and rented a duplex at mumy B link Road off GRA junction were both of them are cohabiting by denting the integrity of his Bank.”

She called on Sterling Bank, Afikpo people, FIDA and Anthony’s friends to call Anthony Oko Ikpor, whom she said is now going about telling lies against her to cover up his misbehaviour, to order.