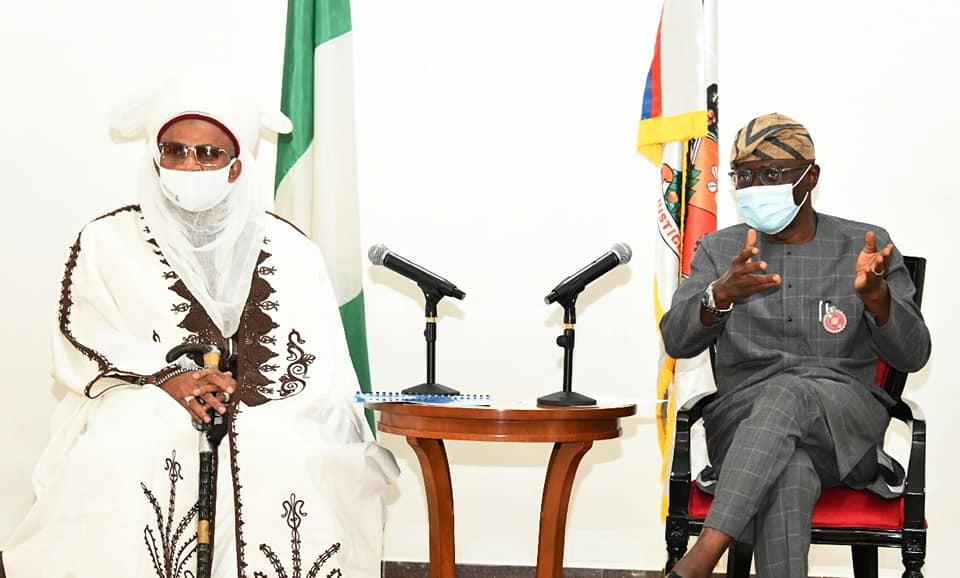 Traditional rulers across the country have lent their voice to the call on the youth who staged the recent nationwide protests against police brutality to embrace dialogue in resolving their grievances.

The monarchs, under the aegis of Nigerian Council of Traditional Rulers, said although the protests were organised for good reasons, the violent outcome of the demonstration, they submitted, pushed the nation to the edge and threatened the peace.
The Council of traditional rulers stated its position on Wednesday when its delegation paid a solidarity visit to Lagos State Governor, Mr. Babajide Sanwo-Olu, over the destruction in the State.

Etsu of Nupe, Alhaji Yahaya Abubakar, who led the delegation to the State House, Marina, said the visit to Lagos – the epicentre of the EndSARS protest – followed the decision reached on the November 3 meeting of the Council jointly chaired by Sultan of Sokoto and Ooni of Ife, noting that the Council was disturbed by violent attack on traditional institutions and the level of destruction visited on the Government- and private-owned assets.

The monarch said the nation had learnt both good and harsh lessons from the violence that followed the protests, urging the protesters and political leaders to dialogue.
He said: “We have come here to express our concern about the violent event that erupted from the EndSARS protests in Lagos and to also put our feelings forward to offer suggestions on the way forward. We acknowledge that there are a lot of shortcomings and misgivings in the system, but misinformation and negative bias that accompanied the agitations fueled the violence we witnessed.

“The reason for the protest was very genuine and reasonable. Unfortunately, the demonstration was overtaken by groups who didn’t believe in peace and unity of this country. So many lessons were learnt both in positive and negative ways. As leaders who believe in peace, we owe people of this country a duty to ensure the lessons are taken by the political class. It is on this ground that we come physically to show our solidarity to the Governor over the losses.”

Abubakar said that despite the violence, the Government had not reneged on its promise to grant the five-point demands of the protesters. This commitment, Etsu of Nupe pointed out, should be seen as an olive branch to the youths to embrace dialogue rather than returning to public protests to press home their demands.

He said: “We urge all Nigerians, especially our youths, to give peace a chance. Whatever grievance anyone or a group may have against the Government, dialogue is the key to resolve them. Our youths have protested peacefully, and those in authorities have started responding to their demands. We all must be committed to peace in this period.”
The Council sympathised with Oba of Lagos, Rilwan Akiolu, over the attack of his palace, while also commiserating with the police and people who lost their loved ones in the violence across the country.

Governor Sanwo-Olu thanked the traditional rulers for the gesture, assuring them of his administration’s commitment to engage jobless youths in productive ventures.

Don’t Underestimate the Power of Natural Gas to Transform Africa

OSIBANJO PLEASED WITH THE ESTABLISHMENT OF EKO FASHION HUB