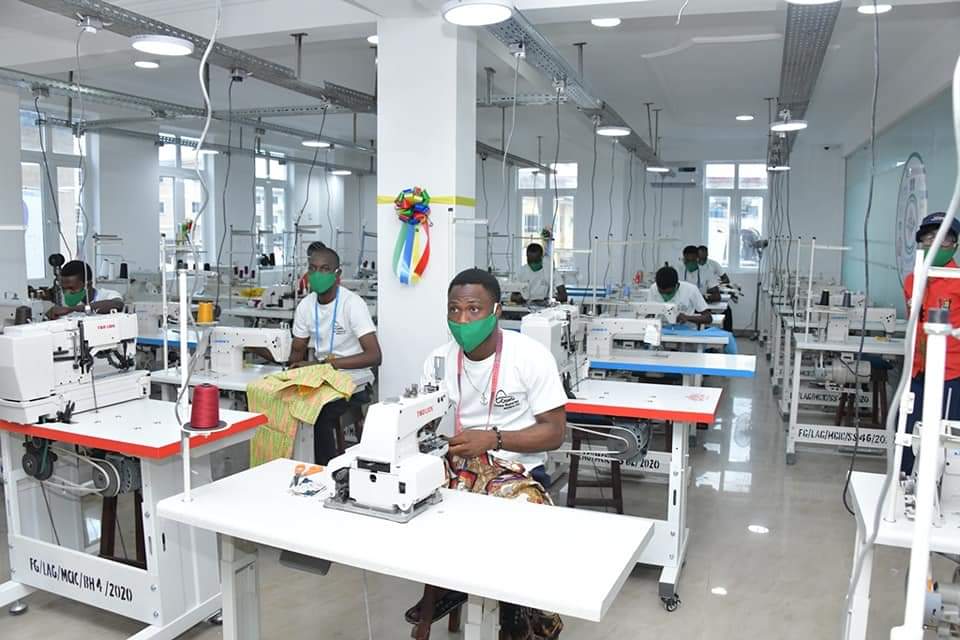 The MSME Fashion Hub-1, which is a shared facility in Lagos State under the National MSME Clinic Scheme, is expected to serve 380 Small and Medium Enterprises daily.

Speaking during the virtual commissioning of the facility from Abuja, Prof. Yemi Osinbajo stated that the government at the centre will continue to look for new and creative ways to support the MSMEs, being the engine room of the economy, while urging other States to emulate such a partnership between the Federal and Lagos State government.

He reiterated President Muhammadu Buhari’s commitment to supporting the growth and development of MSMEs during and post-COVID-19 era, promising to provide two additional MSME Fashion hubs to serve Lagos Central and Lagos East Senatorial districts as requested by Governor Sanwo-Olu.

Osinbajo envisaged that the Lagos fashion industry will become one of Nigeria’s greatest sources of revenue, bigger than the oil sector in the nearest future, saying “MSMEs are the engine for Nigeria’s economy because when they thrive, the country thrives and when they struggle, the country struggles. This is why the Federal Government is committed to creating a conducive environment for MSME to do exceedingly well”.

In his address, Governor Babajide Sanwo-Olu, who was physically present at the commissioning of the project, said Lagos State MSMEs are critical to the economy, hence, the need to create facilities that would ensure a lasting wealth, noting that MSMEs have indispensable roles to play in the growth and sustainability of the Lagos State economy.

Sanwo-Olu thanked the Federal Government for the gesture as the place would become a major fashion hub in Africa since the success of SMEs is germane to the economy, assuring that his administration will monitor and nurture the project.

While noting that many businesses have been significantly affected by the COVID-19 pandemic, the Governor, however, acknowledged the contributions of the Organised Private Sector, especially Access Bank, led by Mr. Herbert Wigwe, who partnered with both the offices of the Vice President and Lagos State, as well as other Federal Government agencies to make the National MSMEs clinic a success.

The Governor averred that the fashion hub is a step in the right direction to alleviating poverty not only in the State but in the country in general and appealed to the Vice President to work with his administration to replicate the Shared Facility Scheme in other senatorial districts of the State.

Speaking on the virtual platform about the project, the Minister of State for Industry Trade and Investment, Ambassador Mariam Katagum, said the shared facility would provide a conducive environment for the SME space.

Katagum, who said that the initiative was one of the key takeaways of the MSME clinic chaired by the Vice President, averred that shared facilities are effective tools that could address infrastructure challenges hindering the growth of SMEs in the country.

Earlier, the Commissioner for Commerce, Industry and Cooperatives, Mrs. Lola Akande said the Eko MSME Fashion Hub-1, which is the first phase of the shared MSME Fashion facility, is equipped with state-of-the-art machinery such as industrial button-hole machines for suits and shirts, tinko machines, straight sewing industrial machines and industrial embroidery machines amongst others.

The Commissioner expressed her appreciation to the Federal Government, the Office of the Vice President, the Lagos State Governor, Mr. Babajide Sanwo-Olu and the private partners involved in ensuring that the project became a reality in Lagos State.

The Managing Director, Access Bank Plc, Mr. Herbert Wigwe, who acknowledged the outstanding growth of the Nigerian fashion industry, reaffirmed the bank’s commitment to growing the nation’s fashion industry, saying that “We will continue to partner with the fashion industry because we believe it would boost local growth of SMEs”.

Anambra: Thank You Gov Willie Obiano, We are Safe

NYCN thanks Buhari, Hails Youth and Sports Minister’s Initiative on the Establishment of the National Youth Investment Funds – Challenge Youth to come up with innovative ideas