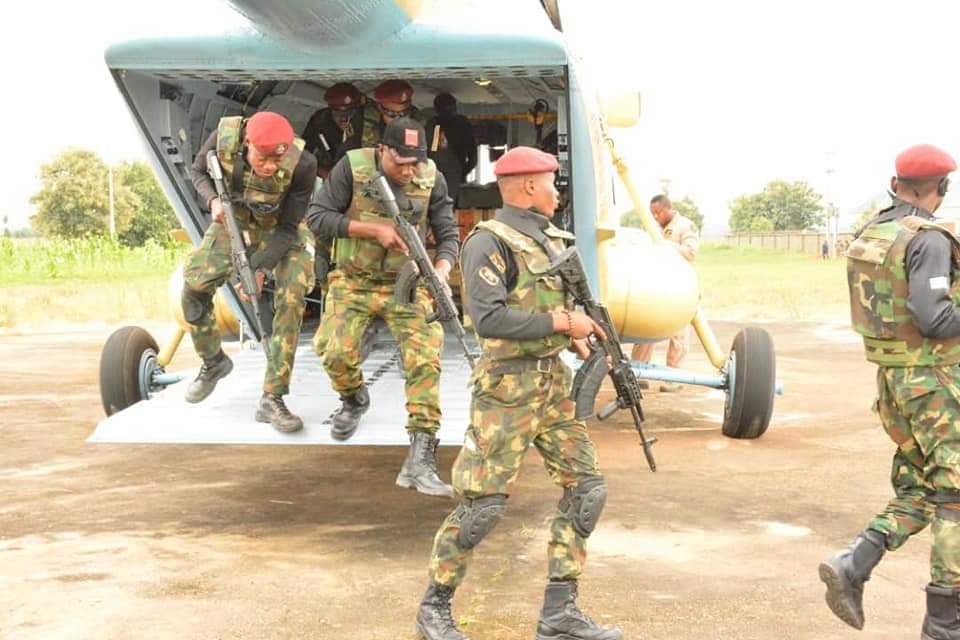 As part of efforts to support ongoing operations in the North Western Zone of the country, the Nigerian Air Force (NAF) today, 16 August 2020, deployed Special Forces (SF) operatives to Southern Kaduna. The SF Team, led by the Commander of the 404 Force Protection Group (404 FPG), Squadron Leader Richard Ngaro, was airlifted by a NAF Mi-171E Helicopter from NAF Base Kaduna to Kafanchan, where they were received by the Commander Sector 7 of Operation SAFE HAVEN, Colonel David Nwakonobi, to join the contingent of the Defence Headquarters (DHQ) SF personnel already deployed to the area.

In his address to the troops during the deployment, the Chief of the Air Staff (CAS), Air Marshal Sadique Abubakar, who was represented by the Air Officer Commanding Air Training Command (AOC ATC), Air Vice Marshal (AVM) Musa Mukhtar, noted that the deployment was in line with DHQ Directives to beef up Operation SAFE HAVEN. The CAS charged the SF personnel to maintain the high level of discipline that the NAF is known for, whilst always upholding the NAF’s core values of ‘Integrity’, ‘Service before Self’ and ‘Excellence’ as they carry out their assigned tasks. He equally reminded them to ensure they respect the human rights and personal freedoms of all law-abiding citizens in the course of performing their duties.

Speaking to the Press, the Representative of the CAS, stated that the NAF SF Team were additional elements to augment the DHQ SF personnel already deployed to beef up Sector 7 of Operation SAFE HAVEN in Southern Kaduna. “The deployment would last as long as necessary until lasting peace is restored. We also have Operation THUNDER STRIKE, which is domiciled in Kaduna to take care of the North West axis, with the Air Component Commander coordinating the air power aspect from Kaduna in support of ground operations in Southern Kaduna”, he added.

He further disclosed that, as part of efforts to enhance Civil-Military relations, a NAF Medical Team would arrive Southern Kaduna in the next few days to conduct medical outreach to provide healthcare services to displaced persons and others affected by the crisis. While highlighting that the military was in the State to assist the civil populace, the CAS called on the residents of Southern Kaduna to cooperate with the Commander Operation SAFE HAVEN and his troops by providing credible information that would facilitate the effective conduct of their operations.

Igbo and Southerners: Must they travel and why pass through such a stress?

START UP: JUST ANOTHER COMMON SENSE LECTURE BETWEEN THE DEGREE JOB SEEKER AND NOT SO EDUCATED