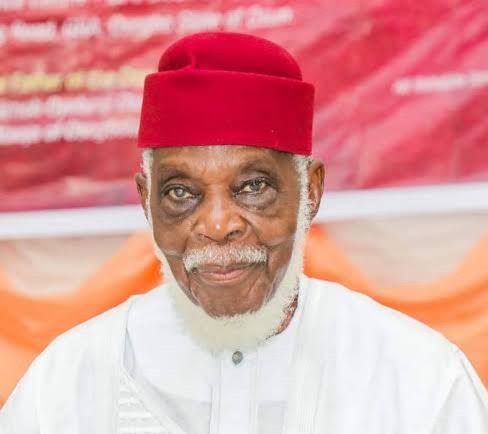 Nigeria and, the Yoruba people especially has lost a gem in the name of Senator Ayo Fasanmi who passed away lately at a ripe old age. Known as a cultural icon in the Yoruba space. The Vice President, Prof Osibanjo has been surprised on his demise.

In the words of the Vice President, he said”We received the news of the passing of Senator Ayo Fasanmi, with deep sadness and grief.”

“A founding leader of Afenifere, a true patriot, a forthright servant of, and interlocutor for the common man. He was a man of deep conviction who remained loyal to the end to compatriots and colleagues from the Action Group (AG) to the All Progressives Congress (APC)”, he also added.

In conclusion,the Vice President said “We thank God for giving him to us for 94 years, his legacy and consistent egalitarian beliefs, social justice and action will live on.”

According to his profile in Wikipedia,He was born in 1925 at Iye Ekiti, a local government area of Ekiti State, southwestern Nigeria. He attended St Paul’s primary school, Ebutte Metta and Government School, Ibadan before he proceeded to the Pharmacy School of Yaba where he received a diploma certificate in pharmacy.He practiced as a pharmacist at Oshogbo briefly before he joined the Nigerian politics.

“Life expectancy in Nigeria is 53 years; that is an upward movement from 49. If someone has lived up to 94, it is a good thing and we take solace in the fact that Baba lived a good life. Baba was a councillor, a member of the House of Representatives, a senator and an aspiring governorship candidate in the old Ondo State. We cannot, but give glory to God for his passing, which was very easy. He was not sick for long. He passed on peacefully” Fola Fasanmi, the last child of the demise Ayo .

ICT IS A MAJOR CONTRIBUTOR TO NIGERIA’S GDP - DG NITDA

PRESIDENT BUHARI FELICITATES WITH MUSLIMS ON THE EID

LEONEL MESSI’S AWARD: IS IT A CASE OF LUCK, DEXTERITY OR GRACE?

Rooted in the cloud, Routed announces its unique Partner Portal