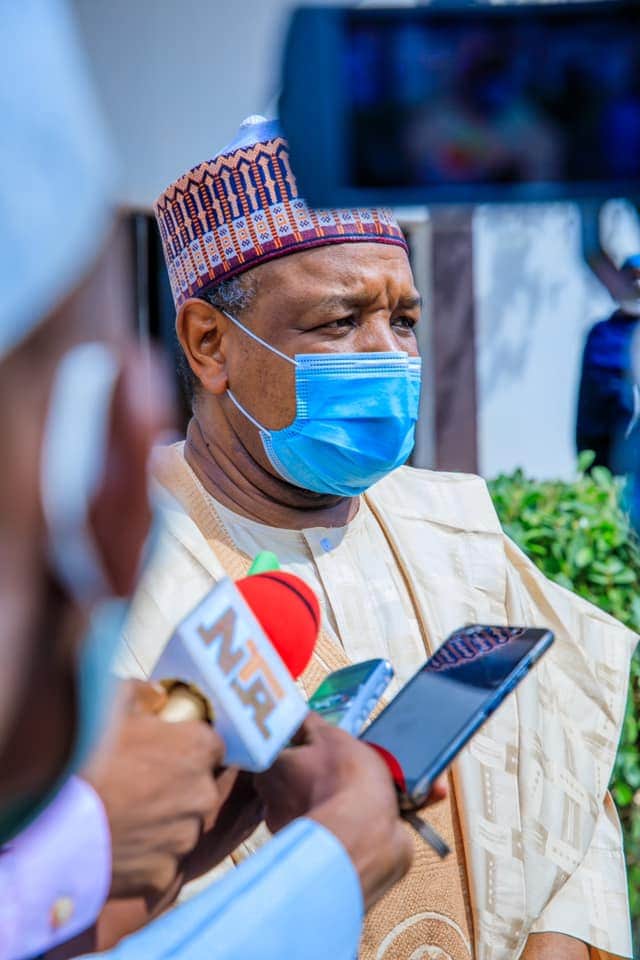 Bagudu said at the historic event that, the revised budget was down with morethan N38 billion, from the nearly N138.13 billion naira earlier presented to the State House of Assembly, for passage .

The governor stated that the downward review of the budget was occasioned by the negative toll the raging Coronavirus Disease pandemic had taken on the global economy, including that of Nigeria.

Bagudu further explained that, the obnoxious trend had forced the Federal and state governments to effect downward reviews of their various budgets for the 2020 fiscal year.

Bagudu said:” The sad development had necessitated the Federal Government and the members of the Nigerian Governors Forum to reduce their respective budgets.

” This compulsory action had led to the reduction of our expected revenues and the downsizing of our planned activities, sequel to sliding revenues.”

The Kebbi governor however noted that, in Nigeria, the problem was alleviated by the commendable action of the federal government, led by President Muhammadu Buhari.

According to him, in the health sector for instance, the setting up of the Presidential Task Force on COVID-19 ,had greatly assuaged the negative impact of the pandemic.

The governor also lauded development partners like the IMF and World Bank that had offered to assist both the Federal and State governments.

Bagudu explained,” The World Bank is to specifically assist the states with a $750 million stimulus package .

” Part of the conditions are the downward review of budgets, assenting to them and publishing same, on or before July 31,2020, and which we have met today.”

Bagudu extolled the invaluable contributions of the various stakeholders in the state, hence, reduced the effect of the pandemic in the state.

He particularly acknowledged the contibutions of the Task Force on COVID-19, coordinated by the Deputy Governor and headed by the Commissioner for Health, State House of Assembly, traditonal rulers, the security and other key stakeholders.

The Governor noted that inspite of the economic downturn brought about by Covid-19 pandemic, both the Federal and the state governments have recorded some remarkable achievements.

He spoke about the ongoing laying of gas pipelines from Ajaokuta to Kano through Kaduna, the ongoing exploration and exploitation of oil in Bauchi and Gombe state which will soon make them become oil producting states as well as the ongoing road reconstruction from Koko to Yauri among others.

In Kebbi State, governor Bagudu also stated that his administration has paid leave Grant to certain category of workers as well as payment of gratuity to some retired civil servants.

He also mentioned the ongoing construction of Illo to Bami road and Maga to Unashi. Bagudu announced that the 20 billion naira Tomatoes processing factory has started operation in Ngaski local government.

The governor happily announced that just of recent, he presented 4.5 kilogram gold bar produced from gold deposit mined in Yauri ,Kebbi State worth 719 thausand dollars to Mr. President , expressing optimsm that tones of gold would be produced before the end of the year.

He further stated his administration has signed an agreement with a professional private firm for the construction of 5000 housing units in the state and work will start within a month.

On the revised budget, Bagudu commended the members of the State of House of Assembly for diligently passing the amended budget in record time .

The Speaker, Rt. Hon. Samaila Abdulmumin Kamba, said that, the state legislature attached greater importance to the revised budget and that was why it was passed in about two weeks it was submitted to it.

Present at the budget signing ceremony were the state deputy governor, Alhaji Samaila Yombe Dabai, the Chief Judge of the State, Justice Suleiman Muhammad Ambursa, Deputy Speaker, Muhammadu Buhari Aliero and other members of the assembly.