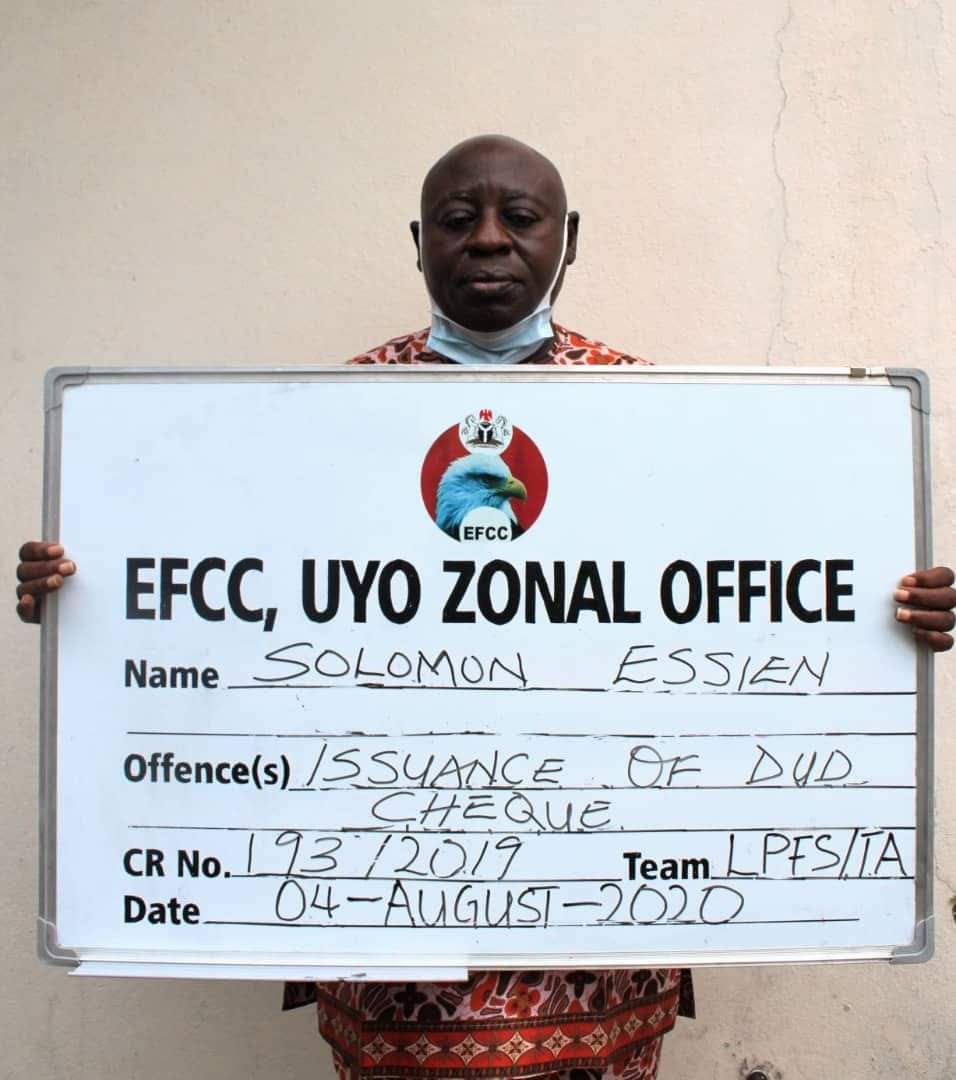 The Uyo Zonal Office of the Economic and Financial Crimes Commission, EFCC, on Thursday, August 6, 2020, arraigned one Solomon Essien and his company, FWDEVA Nigeria Limited, for fraud before Justice Okon A. Okon of the Akwa Ibom State High Court, Uyo.

Essien was docked on a three-count charge, bordering on issuance of dud cheque and stealing to the tune of N9,970,000.00 (Nine Million, Nine Hundred and Seventy Thousand Naira only), contrary to Section 392 (1) and punishable under Section 399 of the Criminal Code, Vol.2 Cap.38, Laws of Akwa Ibom State, 2000.

One of the charges against him read, “That you, Solomon Essien (‘M’), sometime in January, 2018, in Uyo, within the jurisdiction of this court, did fraudulently convert to your own use, the sum of N9,970,000.00 (Nine Million, Nine Hundred and Seventy Thousand Naira), belonging to one Mr. Abu Martins, being payment for the supply of Automotive Gas Oil (AGO) at the Akwa Ibom State Government House.”

The defendant pleaded “not guilty” to the charges, following which prosecution counsel, A. S. Abuh prayed the court to fix a trial date and to remand him in the facility of Nigerian Correctional Service, Uyo. The

defence counsel, Dominic Okon, however, moved a motion for his bail, which was countered by prosecution counsel.

Justice Okon admitted the defendant to bail in the sum of N5million with one surety in like sum, and ordered that he should not be subjected to any form of incarceration or custody, pending the fulfillment of his bail conditions.

Trouble started for the defendant on October 18, 2018, following a petition to the Commission against him, by Abu Martins, dated October 17, 2018, alleging that Essien contracted him sometime in December 2017, to supply 45,000 litres of diesel to the Akwa Ibom State Government House at the cost of N9,970,000.00. After delivering as agreed, the defendant did not only fail to make the payment, he absconded.

When the petitioner traced him to his residence at Shelter Afrique Estate, Uyo, the defendant issued two Zenith Bank cheques in the sum of N5.2million and N2million respectively, which were dishonoured when presented at the bank owing to the fact that the account has been closed by the defendant.

In a related development, the arraignment of Udeme Edem Emmanuel, who is the current vice chairman of Uyo Local Government Area, before Justice Okon A. Okon, by the Uyo Zonal Office of the Commission was stalled on Thursday, as the defence counsel, Mfon Ben pointed to a preliminary objection, filed before the court which argues that the case was a civil matter and not criminal.

This followed the declaration of readiness by the prosecution counsel, A. S. Abuh, for the arraignment of the defendant and for him to be allowed by the court to take his plea.

The judge granted Udeme bail on self recognition and adjourned the matter till October 19, 2020, for the hearing of the preliminary objection.

ICT Change Lives - A Taste of My Dreams

Minister Hails MoU on Repatriation of Benin Bronzes From Germany

The Future of ERP is in the cloud